“The More a Film Challenges an Audience, the More Resistance It Will Inspire”: Five Principles to Live By for Provocative Filmmakers 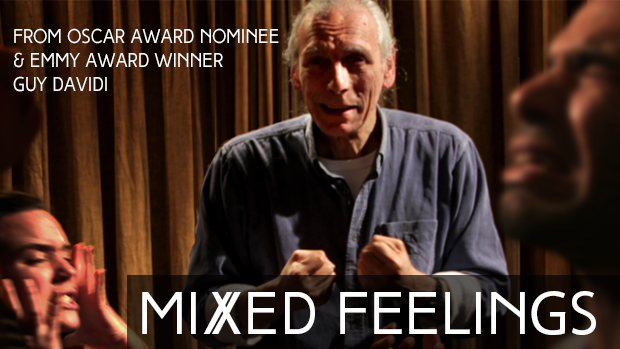 Academy Award-nominated filmmaker Guy Davidi is currently raising funds on Indiegogo for Mixed Feelings. From the Indiegogo page: is an inspiring story about cultural resistance of Israeli director and teacher, Amir Orian – a once successful actor that left his blooming career to create an alternative theater in his own apartment. This documentary tries to create space for artistic expression and the discussion of alternative points of view in a country troubled by destructive nationalistic forces.” Below, Davidi writes about the life of the filmmaker who chooses to make provocative work. Please visit the Indiegogo page linked above to learn more and consider donating.

Everyone wants to see “The New Big Thing” or to hear a story that changes their perception of the world around them, but people often forget it takes a lot of courage to create films that challenge our minds — and that, when you tell this kind of story, you’re likely to face a great deal more opposition than filmmakers who choose a different, more palatable path.

In my latest film, Mixed Feelings, acting teacher and director Amir Orian says, “Either you entertain them or you anger them. There’s no middle way.” This sentence has become very meaningful to me. I truly believe you can’t create original, bold art without raising objections. So here are the five principles that guide me in making thought-provoking films — the kind of films I’m interested in creating.

Be a Messenger
It is our duty as filmmakers to stir something meaningful in our audience and be willing to deal with the fallout that comes along with that. The more a film challenges an audience, the more resistance it will inspire. Overly soft, balanced works don’t generate change. Films that deal with political and social issues may appear to be attempting to mobilize their audiences but often all they are attempting to do is create consensus. However, every day, there are filmmakers out there creating resonant, inspiring works even if they’re not active in the political and social realm. Filmmakers should focus on being a messenger for new ideas and truths – whatever those ideas and truths might be.

Burn All Bridges
When you create an honest, important piece, you must rebel against conventions. Whether by dealing with controversial subjects, upending typical storytelling and cinematic conventions, or even in the way you produce the film — we must always forge a new path in our creative endeavors. Unfortunately, the further you get from the beaten path, the fewer people will understand the way you make your film — and the fewer people will want to support your ideas. People will often doubt you, and doing work like this will often make you enemies. Everyone will say they always supported you but very few will stand by you in the moment of truth. Any decision you make might create new opposition to you or your work. The more exposure you get, the more fire you attract. People who support you now might oppose you tomorrow and vice versa. You must be able to burn all bridges necessary to create the most powerful and sincere film you can, while paying no heed to the fire that will be aimed at you. A strong stand and a positive attitude are key for maintaining your creative flow under these conditions. To endure this, you must find your center as an artist, independent of anybody else, so you can remind yourself that no one can take away your talent or independent voice.

The Positive Creative Process Saves You Every Time
The most brave filmmakers go against the tide. So, of all filmmakers, these are the ones that need to have a more positive, constructive attitude. We must give up ideologies that hinder us and become the excuses for our weaknesses and failures. It’s too easy for us – especially for us – to justify our defeats in this world as interference from forces bigger than us. Hence, we need to find a renewed sense of openness and naiveté – something that will allow us to find partners in unexpected places.

The New Israeli Foundation for Cinema and Television might not be the sort of organization you think would support Five Broken Cameras, which is essentially a Palestinian film. Partnering with them was a choice we knew might be controversial, but it turned out to be extremely wise because they were a very supportive in the distribution process. Our positive attitudes as filmmakers made others more willing to support us – regardless of our differing ideas. We didn’t shut ourselves down to the possibility of assistance from anyone. So it’s important to always form an open creative process with your partners.

On the other hand, you must also trust your instincts and know when give up on potentially destructive partnerships. Even if they come with an enormous amount of money, if you don’t believe you can get them to participate in a constructive creative dialogue, you must listen to your artistic core and let them go.

You Define Your Success
Most people fantasize about winning an Oscar or an Emmy. There’s an expectation that something big will happen when you reach this milestone. However, the constant search for external validation will serve only to distract you. The desire to succeed, which is supposed to make your talent keener, might actually make you duller. Suddenly, all the risks you took that set you apart from the crowd become considerations you must make to appease others – the investors, the audience, the producers, etc. They become the unavoidable fears that come with making a movie, and these fears become your biggest obstacle.

Too many films attempt to please everyone and, in the process, refuse to take a stand. This will make any film less meaningful. The sheer act of telling a dramatic story with a strong stand can be threatening, and the emotional strength of the drama will arouse anxiety and doubt. Filmmakers who have had success can become preoccupied with the worry that their success was ephemeral. They become distracted from the more important question, “Will the pursuit of success become the burden that will hurt my work?”

Get High on Filmmaking
External validation does not fill up one’s soul — only the satisfaction of the creative process can do that. To be committed to the art of filmmaking is what saves us from the shakes of this profession and encourages us to take the risks we need to take in order to create something new. You have to love the process. It must be something you are addicted to. For all the fears, pains and frustrations involved in the creation of one film, it is the moments of creative euphoria — of seamlessly connecting one image to another, of writing the perfect voiceover sentence, of capturing a moment of pure beauty in your camera after hours of shooting — these moments are irreplaceable and are the reasons we all, as thought-provoking filmmakers, can and will keep going.