10 Tips and Observations on Pitching Documentaries from the IDFA Forum 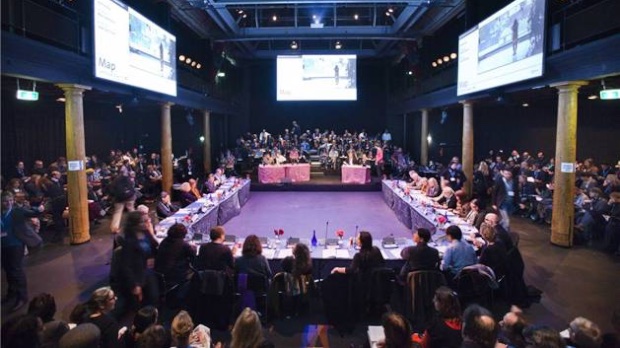 The 27th annual International Documentary Film Festival Amsterdam (IDFA) is one of the largest and most prestigious documentary film festivals in the world. Beyond being just a festival, though, for the past 22 years IDFA has hosted a networking and business-oriented pitch session, the IDFA Forum, where selected documentary filmmakers have an opportunity to meet with an array of commissioning editors from around the world (with a high concentration of European broadcasters, naturally). Over the course of nearly three full days, commissioners sit around small round tables or in a large auditorium arena and weigh in on project pitches while producers try to close deals on financing for their projects. As a member of the documentary industry website The D-Word, I was given an opportunity to observe and report. The Forum gives a bit of insight into the trends of the industry, as in one location you can simultaneously hear of new projects that will probably be sweeping film festivals in the coming years (two of this year’s IDFA winners were pitched at previous Forums), as well as take the pulse on what broadcasters and film financing foundations (like Cinereach, BRITDOC and the Ford Foundation’s Just Films) find intriguing and worth supporting. Over the course of the three days, I picked up on a few of these trends, which I will presumptuously call “The 10 Things I Learned While Watching A LOT of Pitches at IDFA.”

1. ACCESS! Nearly every commissioning editor (CE) at the pitch forum expressed varying degrees of admiration at the unique, intimate and compelling access that filmmakers had obtained with regard to their main characters. A trend throughout all of the pitches was the importance of this access — both securing it, as well having it be strong and intimate enough to allow the filmmaker to tell a powerful, character-driven story. Most filmmakers claimed to have some kind of exclusive or special access to their story to further sell the CEs on the importance of their access.

2. Make sure your character is compelling. Even with access, you still need to get those characters! Character-driven documentaries continue to be the strongest trend in documentary storytelling. However, it’s not enough to have a big, fascinating character. Broadcasters are keenly aware that if you’re going to spend an hour with someone on your TV, the filmmaker needs to make that person relatable to the audience. In the pitch for The Nine Lives of James Brett, the topic of an unreliable narrator surfaced. Different CEs had wildly different opinions on that subject. Certain funders (British Film Institute, PBS’ POV strand) seemed to be intrigued by that type of character, whereas others (BBC Storyville, CBC) were less so. What seemed to be clear, though, was the importance of likability for the main character. But just being likable wasn’t enough, as the team pitching Boundless Love learned when several commissioning editors commented on how their main characters, as demonstrated in their trailer, seemed “boring.” Likable is good, but boring…not so much. A documentary needs to have some conflict and stakes to get a commissioner’s attention.

3. If your film will be innovative in form, display that innovation in the trailer. Inventive forms were not widely on display at this year’s IDFA Forum. Most documentaries followed the trend of character-driven films, some with a more observational “follow” documentary bent, others dealing with archival material and interviews. The film Notes On Blindness was one of the few pitches that broke the mold, favoring a narrative storytelling technique highly inspired by The Diving Bell and the Butterfly, proving there is still room for some experimentation at the documentary table. It should be noted, though, that this technique polarized the views of a few of the CEs at the table. Many loved that it “didn’t look like a documentary,” but two commissioners took exception to it because of its unusual visual approach that they found a bit confusing. The Nine Lives of James Brett also attempted a slightly unusual storytelling technique via re-creations, but ran afoul of not having a representative scene of this technique to show in its trailer. If you’re going to pitch something that pushes the envelope in style, CEs seemed to want to be able to get a taste of that in the trailer in order to better comment on the potential of the film or commit to ponying up money to support it.

4. Be part of a community. It’s helpful to the pitch if the filmmaker is a member of the community that is being depicted. Not only does that involvement give the CEs confidence in the filmmaker’s viewpoint, it also gives the filmmaker extra credibility when it comes to securing access and handling difficult subject matter. The pitch which best exemplified this was for Jimbo, a film about a schizophrenic. When the director revealed during his pitch that he was also a schizophrenic, his admission seemed to help garner a lot of support from the CEs around the table.

5. Know your forum. Every international market and broadcaster has slightly different concerns and needs – and the better a filmmaker knows that audience, the better he or she may be able to tailor the pitch. CNN Films commented that a film with foreign language subtitles would be “difficult for their audience.” That meant a number of the pitches at the very internationally-flavored IDFA Forum were probably not going to find a home on this network. But Al-Jazeera America had no problems with that particular issue and was happy to jump in to support a wider range of projects. Additionally, different countries have different levels of interest based on cultural issues that are important or unusual from their perspective. Boundless Love, which portrays polyamorists as being normal people, garnered less than enthusiastic support from CEs from Sweden and Denmark but found a bit more of an interest in the far more prudish US market channels, for instance.

6. Crime pays. One topic that seemed to reach across all markets, universally, was the subject of criminal justice. Numerous CEs commented on how this particular genre was always a hot topic for their channels, from Sweden to Japan to the US … and it didn’t seem to matter in which territory the injustice occurred. This particular kind of story seemed to resonate across all cultural boundaries.

7. Provide a platform. Additionally, CEs seemed to have a strong affinity for any project that could be seen as giving a “voice to the voiceless,” as evidenced in the pitch for Through You Princess, about a YouTube unknown and the difficulties in her life after being suddenly thrust into stardom by a music producer. Numerous projects stood out in regard to empowering forgotten populations, including a film about prison inmates and one about high-school dropouts. This approach allowed several foundations seated around the table — including representatives from Bertha BRITDOC, the Ford Foundation, Tribeca Film Institute and Cinereach — to offer insight and support for several of the projects.

8. Print outlets do video too. The convergence and commingling of online video and “traditional” broadcast continues to grow. This year, it took a slightly different form, with the U.K.-based The Guardian stepping into the pitch process by supporting the project, The Imam’s Daughter, as the primary financier at the central pitch. This meant that they sat alongside the filmmaker to help pitch the project. The New York Times’ Op-Docs section also continues to be featured prominently on the paper’s website, and the CE for that strand seemed to be actively supporting or considering many new projects at the Forum.

9. Hone your trailer. Not so surprisingly, trailers can make or break a pitch. Making a compelling trailer is an art form, completely separate from making a compelling documentary. As was noted by one of the commissioning editors, “A great pitch is not necessarily a great documentary and vice versa.” That sanguine viewpoint was illustrated in the wide array of trailers on display at the forum. While most were technically solid, many lacked a lot of the hallmarks of a great pitch trailer – clear character depictions, exploration of a multi-act story structure and the stakes involved, all wrapped up in a 3-5 minute video that also represents the style of the finished documentary. Overall, only one of the pitches (Aida’s Secrets) seemed to check all of these boxes. That didn’t stop many of the commissioning editors from complimenting other trailers that didn’t hit all of these marks, though. Several CEs noted how beautiful a project looked or how compelling a trailer was even without all of the ingredients one would traditionally like to have in their pitch trailer. For instance, for the documentary about Rene Redzepi, NOMA: My Perfect Storm, the CE at Dutch broadcaster VPRO even admitted that the trailer breathed life into a character that seemed very dry and uninteresting in the written material that was presented ahead of the pitch.

Demonstrating your character in an intimate and visually appealing fashion was of primary importance. Many of the pitch trailers accomplished this well. However, an inability to convey the character in the trailer often yielded CEs turning the project down or being confused by the pitch, as was the case in the promising, but ultimately unsatisfying Mrs. B., A North Korean Woman. On the other hand, Through You Princess, whose team had struggled with the verbal pitch, found itself transformed as soon as the trailer was viewed, with many CEs moved to support the project.

10. Your track record matters. When it comes down to granting large sums of money and getting projects on track, relationships with CEs and others at the various channels, networks and foundations is important. As is the body of work you bring to the pitch, as evidenced by the strong support received by Nima Sarvestani for his project, On the Border of Paradise. Nima and his team had just won an International Emmy award the night before his pitch (for a previous project, No Burqas Behind Bars) allowing the CE from Finnish broadcaster YLE to comment that although he had trouble understanding the pitch, he had such faith in this team that he was supporting the project in any way he could. After watching most of the nearly 50 pitches, it also became clear that most of the commissioners would rather be saying “Yes!” to projects than not. The first (and probably most difficult) step is to get the project into the Forum. In order to get your documentary a place at the Forum table, putting together a great team with a winning track record ought to be one of the first steps.

Eli Brown is an award-winning independent filmmaker and member of The D-Word. His work has been screened on PBS, A&E, Discovery ID, TV One and in film festivals around the world. He owns and operates the production company, Burst Films LLC. He can be followed on Twitter at @postbrooklyn.