“I Always Try to Find Something Better”: Nuri Bilge Ceylan on Winter Sleep 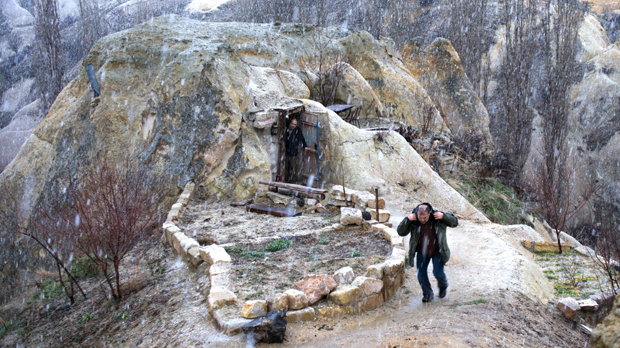 Over the course of his seven feature films – the last five of which have won prizes at Cannes – the Turkish filmmaker and photographer Nuri Bilge Ceylan has moved from a dramaturgy primarily based in photography (in films such as 2002’s Distant) to one based firmly in screenwriting, as in the elegant structure and dialogues of 2011’s Once Upon a Time in Anatolia. This development as a screenwriter has been accomplished in tandem with his wife, Ebru Ceylan, with whom he has co-written the last three films.

Nuri Bilge Ceylan was trained first as a chemical and then electrical engineer before turning to photography and cinema, and his writing shows traces of an engineer’s methodicalness. Climates, in which he co-stars with Ebru, is written in three acts of almost uniform length. Once Upon a Time in Anatolia takes place in two nearly equal acts, the first at night and the second during the day. His latest, Winter Sleep, continues developing the couple’s screenwriting approach. Its 196-minute running time is structured around long dialogue scenes, and Nuri Bilge Ceylan worried whether audiences would accept this more literary approach; that the film won the Palme d’Or at the 2014 Cannes Film Festival indicates some have.

Filmed in the stunning Anatolian landscape of Cappadocia with its fairy tale cliffs, Winter Sleep is a Chekhovian family drama, both intimate and epic at the same time, focusing on Aydin, a former actor who has retired to remote Anatolia to run a hotel that belonged to his late parents. He is a reluctant landlord resented by his tenants, as well as by his beautiful wife Nihal, with whom he has a difficult relationship. His divorced sister Decla, who has returned from Istanbul to live at the hotel as well, considers him a pompous hypocrite. Aydin’s inheritance has allowed him to live as a bit of a tyrant, blind to his effect on other people’s lives and utterly unwilling to examine his illusions about himself. As in a Chekhov story (1999’s Clouds of May was dedicated to the writer), we meet these characters as their way of life is coming to an end. All this is set off in an early scene when the son of one of Aydin’s tenants throws a rock at his car, shattering his window. The delicate balance that had allowed the characters to maintain their untenable situation begins to crumble.

At their best, Nuri Bilge Ceylan’s films thrive on a tension between formal control and a commitment to authenticity. Both these qualities were present as I sat at down to talk to him about how his writing and directing process has changed over the past ten years.

Filmmaker: How has the process of making films changed for you as the films have become more script-based? I’d understood that earlier — for example in Distant — you had time for reflection built into the shooting process. I’m wondering if that reflective work goes now more into the screenwriting process.

Ceylan: The screenwriting process has changed a lot during my film life. As I began to feel half-confident film-by-film, I became braver in going into more complex methods and problems. My films have become more complex, and for that you need a better script, a more detailed script. That doesn’t mean that I don’t change them during shooting. Scriptwriting for me is a never-ending process until I finish editing, even sound design, because even there you can still change dialogue. But I try now to write in as much detail as possible in order to feel safer in the shooting.

I first shoot what I wrote, and then begin to think again and try many new things. I’m always “writing” when I watch the scene as I shoot it. I try to make it even more detailed, because if there are variations in the shooting the possibilities of what you can do in the editing increases exponentially. Like in chess, you can bring together many different things during the editing. For my filmmaking, editing is writing, an important process, and not a mechanical thing like in Ozu. I like Ozu very much, but his editing is easier. He used to shoot what he wrote, and nothing changed in the shooting or the editing. My filmmaking is not like that. I always try to find something better, something more real, something more true. When you write a script I think you have a tendency to be a bit didactic, but in shooting your brain works in a different way. You see something, and maybe you feel there is something wrong. If you feel that, you have to find something. Even if you cannot find anything, you have to try. Sometimes the opposite of your intention works better. You feel it in the shooting.

Filmmaker: When you are doing these variations during the shooting, is that primarily in relation to working with actors or does it also involve changing formal structures?

Ceylan: For actors it is not easy to understand what’s going on. They are lost a little bit in my way of shooting. I tell them something and they do it, but they really don’t understand why, because from their point of view it is difficult to see. Sometimes, of course, they are very helpful, and if the actors are brave enough and if their intuitions are strong they can sometimes create something. When I finish everything in the shooting, I sometimes let them improvise if I see potential in them. With some actors there may be something surprising, but I let them improvise only after I get everything I want.

Filmmaker: In the editing process, do you find that you’re changing the writing in big ways?

Ceylan: Yes, everything can change. You delete dialogue sometimes, or change it. Editing is the only place where you can be sure, and you have to be sure there. In shooting, there is always a time constraint and you are often left unsure. There may be something wrong in that scene, and so on; in editing, you see everything. You add sounds and try many things and you see the balance. You are alone and you have time. At least I do, because nobody pushes me that on this date you have to go into cinemas, and so on.

Filmmaker: How long do you spend in the editing process?

Ceylan: For this film it was six months, because I shot 200 hours of material. I had to work very hard to finish it in six months.

Filmmaker: Is the structure basically the same as in the script?

Ceylan: The structure is the same, but there were many more scenes that I took out of the film. The structure doesn’t change much now, because I am writing more detailed scripts, but in my earlier movies the structure changed a lot because the script was loose.

Filmmaker: How do you and your wife Ebru work together as co-screenwriters?

Ceylan: I haven’t worked with many people other than my wife. If they don’t have a very strong personality, it’s difficult because they accept whatever I say. They should force me somehow. Ebru, because of our relationship, knows me better. She insists and she fights. She never gives up, and of course she’s very good. And she’s a very realistic person, which I think is important. Maybe even more realistic than me.

Filmmaker: Do you work together on everything, for example on structure and on dialogues?

Ceylan: No! It’s impossible to work together. We never like the same thing at the same time. Since it’s my film, if she doesn’t accept something and if I insist, the last decision is mine. And she’s still talking to me even after it’s finished: “this was wrong and this was wrong.” But it’s my film.

Filmmaker: You’ve talked about several Chekhov stories being the inspiration for this film, but the long scene with Aydin and his sister made me think of the scene in Bergman’s Winter Light in which the priest destroys his lover by telling her everything he hates about her.

Ceylan: I like Bergman very much, but I think this scene isn’t much like that one. When we see family members eating each other, all of us remember Bergman, of course. He’s the master of this. That sister relationship is based on the Chekhov story “Excellent People.” We extended it and wrote many new dialogues, but this sister and brother conflict comes from that story. It’s not similar, because in Winter Light there is a humiliation. He humiliates the woman, and she accepts it, doesn’t fight against it. Here, there is no humiliation, everyone is trying to protect themselves. If there is humiliation, it is the sister who humiliates more.

Filmmaker: Because after that she disappears.

Ceylan: Actually, just before she disappears, he goes to her room. She doesn’t answer, but we feel that she’s there. After that he (Aydin) leaves the house and since we follow Aydın for the rest of the film, we don’t see the sister again. There were more scenes with the sister, actually. I took them out in the editing.