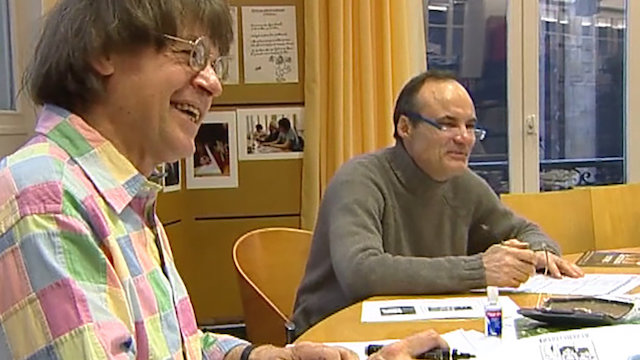 by Sarah Salovaara
in Filmmaker Videos
on Jan 9, 2015

“What’s clever here is that we don’t actually depict Muhammad. We can’t see Muhammad’s face. That’s a fact.” With the terrible attack on Paris’s Charlie Hebdo offices culminating in a two-fold siege earlier today, with the presumed perpetrators now dead, The New York Times has posted an Op-Doc that provides a haunting look inside the creative process behind one of the magazine’s most controversial covers. Shot in 2006, when the directors Jérôme Lambert and Philippe Picard were filming a documentary on the now deceased Jean Cabut, the short film parses the provocation that purportedly led to the death of Cabut and his colleagues. The film is available on the Times‘ website, and a portion of the filmmakers’ statement is below.

In filming Cabu’s now historic meeting with his editor in chief and fellow cartoonists and editorialists, we could not know that we were capturing on camera such an important moment. We were just amazed by the collaborative, creative, joyful process that led to the cover and caption, Cabu’s drawing of the Prophet Muhammad, cleverly hiding his face with his hands to avoid breaking outright prohibitions on showing the prophet’s likeness, but still provocative. Provocative enough to apparently serve as the root of this week’s attack.

As the cartoon was published, police officers were assigned for Cabu’s protection. As the death threats against him soon poured in, his humor and high spirits remained intact. Our friend Cabu was murdered. Today, we miss him.