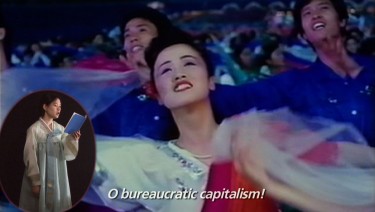 What happens when you take an independent American filmmaker, a fetish for Communist memorabilia, and subtract all irony? Pretty much the films of Jim Finn.

From May 27-June 2, the Anthology Film Archives will be playing the shorts and features of Jim Finn. Disclaimer: I have shown his films at film festivals I work for and commissioned Finn to make a Lunchfilm.

The Busby Berkeley of propaganda, Finn has made three features with a lo-fi indie style that mixes larger Hollywood genre trappings in a big bowl. The results are funny, but also packed with socio-political commentary. Seems hard to pull off but Finn does it without pandering to being hip.

Interkosmos follows two Eastern German cosmonauts into space, where love gets in the way of science, interrupted by occasional musical sequences by cheerleader teams. Although you can tell Finn didn’t spend a lot to make the film, I have to say it seems completely realistic. Stylish sets, controlled acting, comedic-extistential timing and a great Jim Becker/Colleen Burke score make this one of the more unique and fun indie films of the last ten years.

Finn’s second feature, La Trinchera Luminosa Del Presidente Gonzalo, is much more bare, following a group of imprisoned female Shining Path followers through a day of discussing their lives and beliefs. Gonzalo shows Finn really wants to explore what the hell happened politically in the last five decades through his filmmaking and subjects, how people got so lost and fought to regain control through motivated groups. Where Interkosmos delivers with style and clever humor, Gonzalo gives you a deep look inside a movement and rationales.

Last, and possibly the most entertaining and thoughtful, is Finn’s The Juche Idea. A Marxist-Leninist-musical documentary, Juche follows a South Korean video artist in North Korea who hopes to revitalize Juche (pronounced choo-CHAY) cinema, somewhat inspired by a true story of a South Korean filmmaker kidnapped in the ’70s to improve the North Korean film industry. Being his most ambitious film, Finn employs documentary, formal avant-garde, language lesson videos, and sci-fi recreations to examine the souls of governments, leaders, and the media. This is no kitsch mockumentary, just a careful analysis of the love of cinema that is as surreally funny as it is true. Isn’t art revolutionary?

Does Finn hate America? Nope, not even in a hip faux-academic way. He is just obsessed with the people, art and politics of Cold War era Earth. I watched a St. Louis Cardinals game at his place. He is all red and white and blue.

Interkosmos trailer from jimfinn on Vimeo.