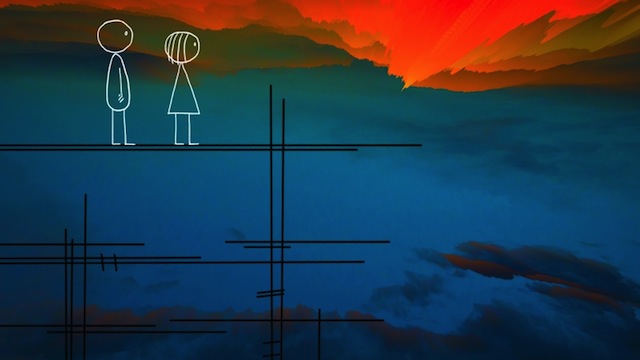 Last evening at Jupiter Bowl in Kimball Junction, the 2015 Sundance Short Film Awards were doled out over a somewhat temperamental microphone. Stationed at the foot of a bowling alley, Director of Programming Trevor Groth said a few words before turning it over to Jared Hess, who is at the festival with his latest, Don Verdean. Hess told a nice anecdote about forcing his wife Jerusha Hess to invite Pauly Shore to a screening of their first Slamdance short decades back, before reminding the audience that any interest you court in a short film is reason to stay true to that unadulterated vision.

The mic cut in and out over his punchlines, but eventually programmers Mike Plante and Kim Yutani introduced the jury members Autumn de Wilde, KK Barrett and Alia Shawkat, who presented the awards in the nonfiction, fiction and animation categories. The full list of winners is below, and having seen a handful, I can highly recommend Oh Lucy!, The Face of Ukraine: Casting Oksana Baiul, and the Grand Jury winner World of Tomorrow.

The Short Film Grand Jury Prize was awarded to:
World of Tomorrow / U.S.A. (Director and screenwriter: Don Hertzfeldt) — A little girl is taken on a mind-bending tour of the distant future.

The Short Film Jury Award: U.S. Fiction was presented to:
SMILF / U.S.A. (Director and screenwriter: Frankie Shaw) — A young single mother struggles to balance her old life of freedom with her new one as mom. It all comes to a head during one particular nap-time when Bridgette invites an old friend over for a visit.

The Short Film Jury Award: Non-fiction was presented to:
The Face of Ukraine: Casting Oksana Baiul / Australia (Director: Kitty Green) — Adorned in pink sequins, little girls from across a divided, war-torn Ukraine audition to play the role of Olympic champion figure skater Oksana Baiul, whose tears of joy once united their troubled country.

A Short Film Special Jury Award for Acting was presented to:
Back Alley / France (Director and screenwriter: Cécile Ducrocq) — Suzanne, a prostitute for 15 years, has her turf, her regular johns, and her freedom. One day, however, young African prostitutes settle nearby, and she is threatened.

A Short Film Special Jury Award for Visual Poetry was presented to:
Object / Poland (Director: Paulina Skibińska) — A creative image of an underwater search in the dimensions of two worlds — ice desert and under water — told from the point of view of the rescue team, of the diver, and of the ordinary people waiting on the shore.