“There is Always a Lot of Pressure to Keep Your Main Character Likable”: Advantageous | Director Jennifer Phang 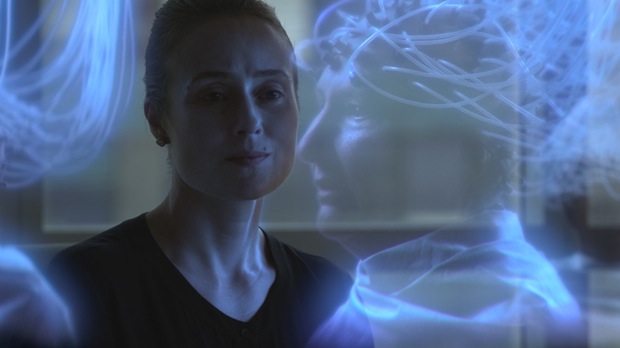 Preparing the visualization and unfolding of the story and its themes, I had to plan carefully how we could scale our visual ambition with the resources available. In working with designers on the technology and the city buildings, I emphasized our Victorian Futurist aesthetic. It felt fitting for a story inspired by Victorian period novels. I’ve always been intrigued by stories about class mobility, devotion to family, and hidden value systems, and how these pressures can push people to do things against their intuition and sacrifice the biggest loves of their lives. One of my influences in writing the original short was The Age of Innocence. I looked at the elegance of dresses, curves, patterns from the Victorian era period, and how these were unspoken signifiers of class and social position. I referred to these ideas in the visual development for the production design and visual effects.

In our writing process Jacqueline Kim and I discussed a lot about the expansion of Gwen’s back story, and how flawed of a person we would allow Gwen to be. There is always a lot of pressure to keep your main character likable. But if you try to create a character that pleases everyone, you end up with a generic person. We wanted to write about a woman who contemporary women — and men — could identify with. A complete woman, who has happiness, love, talent, savvy and ambition. But she has also suffered, and has reacted to her suffering with mistakes. Gwen is a great person, who has done right by her daughter, but she isn’t a saint.

Most often we see the complications of what it means to be an American male on screen, and we accept these characters’ mistakes and relate to them. But when we see a woman making mistakes, there’s a risk that an audience will disconnect from her because she’s not fitting an idealized idea of motherhood or womanhood. So allowing for a darker backstory for Gwen felt like a risk because we also wanted to keep palpable for a diverse audience the tremendous parental love in the story.