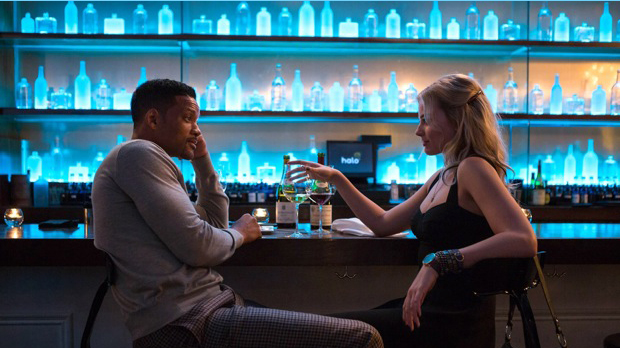 by Matt Mulcahey
in Cinematographers, Interviews
on Mar 3, 2015

Early in the new film Focus, a veteran con man played by Will Smith teaches his fledgling grifter protégé (Margot Robbie) the tools of the trade: misdirection, deception, subliminal suggestion. They’re a few of the tools applied in Focus by cinematographer Xavier Grobet as well, who is tasked with not only making the New York, New Orleans and Buenos Aires locations sleek and alluring but also with pushing audiences alternately toward and away from the plot’s various double-crosses.

Focus marks the second collaboration between Grobet and I Love You Phillip Morris directors Glenn Ficarra and John Requa. The Mexican cinematographer talked to Filmmaker about continuing that alliance, his early Super 8 days and breaking new ground with Final Cut X on Focus.

Filmmaker: You grew up in Mexico City in the pre-VHS age of the late 1960s and 1970s. What was your access to films like as a young man?

Grobet: During my early years in Mexico City there was this Cineclub that would show world movies and all my friends and I would go every weekend. We watched everything from Godard to Vittorio De Sica to Woody Allen, from Pasolini to Kubrick. There was also the National Cinematheque, which had a great selection of movies. There was a big culture of movie watching there at the time.

Filmmaker: Your mother, Lourdes Grobet, is a still photographer. How did that affect your interest in image making?

Grobet: My mother started as a painter, but she switched to photography. She was always looking for new technology, new ways of communicating. We actually shot a documentary together that she directed, and I shot a couple of years ago with her on the Bering Strait. I grew up with a dark room in my house and I always had cameras and photography around me. When I was 11 or 12, I got my first Super 8 camera and I started doing my own little films. I was just doing some stop-motion animation. Later on, my cousins and I would write and shoot our own little stories with our Super 8 equipment. That led to falling in love with the camera and moviemaking.

Filmmaker: As we speak you’re in the midst of your third film with directors Glenn Ficarra and John Requa — Fun House, which is shooting in New Mexico. What is your process when working with them?

Grobet: It’s funny, because each of the three movies has been quite different. On Focus, we did a lot of storyboarding and spent a lot of time designing shots. But on [Fun House], we’re shooting in a completely different style. We do a rehearsal [on set] and I start presenting them with options. So it’s a bit more of creating it on the go. We’re doing handheld and a more gritty and realistic style, not slick and sexy like Focus. After three movies together, we know each other. I know what their tastes are and they appreciate my input. There’s not much that has to be said, because we know what each of us likes. It’s a really cool feeling to get to that point.

Filmmaker: You shot Focus with the ARRI ALEXA XT and Hawk V-Lite anamorphic lenses. Why were those the right tools for this story?

Grobet: We teamed up with [Los Angeles-headquartered post production company] Light Iron and we talked to them, as well as Apple and ARRI, about shooting the movie in a way that we could process everything in-house [on set during production]. I started doing tests on the ALEXA, shooting ProRes 2K versus ARRIRAW to see which would be more effective. The ARRIRAW files are pretty big and wouldn’t be as easily manageable. In doing my tests, I saw that there was very little difference in definition between the two formats so we decided to shoot ProRes 2K. In terms of color rendition, you have less information [with ProRes 2K as opposed to ARRIRAW], but you still have enough to work around. We did use ARRIRAW for some special effects and green screen shots, but everything else was shot ProRes 2K.

[As for the Hawk lenses], we wanted to shoot with a 1.85 aspect ratio, and in order to get as much information as possible and make use of the ALEXA’s entire 4:3 [sensor] we chose anamorphic lenses. When we compared [the Hawk anamorphics] to spherical lenses, the Hawks gave this beautiful volume to the image. The image popped off of the screen and was vivid and rich. We really loved those lenses.

Filmmaker: Focus is being touted as the first major studio film edited on Apple’s Final Cut X. What impact did that decision have on your job during production?

Grobet: With Light Iron, I pretty much had the lab in a trailer next to the set the entire movie, so we were able to download and color time. Then literally the next person over on another station would be doing dailies, syncing and providing all of the deliverables for the studio and for editorial. The editing room was also on the set, so the directors were actually cutting the movie [on Final Cut X] on their lunch break. We weren’t watching dailies — we were watching today-lies of what we’d shot in the morning.

Another advantage was having my DIT Brandon Lippard next to me. We were coloring the scenes from the moment we shot them. The directors were editing the movie in a form that was very close to the final look. To me that was very useful, because usually what happens is you get your dailies that are not correctly timed and then for months [the directors] edit the movie with those un-corrected dailies and they get used to the image. So when you come in at the end of the movie to color time it, [the directors] go, “Oh my god, that looks so different. That’s not what we are used to seeing.” In this case, the dailies had the look that I wanted from the get-go.

Filmmaker: Did you come across any issues with integrating Final Cut X into a workflow with the ALEXA and Light Iron?

Grobet: Part of the whole deal was to create a language that would go through the entire pipeline. In order to make Final Cut be able to read our color, we had to have an Apple Final Cut LUT pre-rigged on the Light Iron system. In other words, we were applying color on top of a LUT that was created to match both systems. It made it a little complicated, but in the end it worked.

Filmmaker: Focus pairs romantic leads of differing ages and skin tones. How did you design your lighting so that it would compliment both Will Smith and Margot Robbie?

Grobet: In the beginning I thought it was going to be more complicated, but at the end of the day there wasn’t that big of a difference in the way I lit them. Will’s skin has a sheen that meant I didn’t have too. And sometimes if Will’s face went dark, then I let his face go dark. I didn’t have to bring it up to key and have it be the same brightness as Margot’s face. It just had to feel natural in the way the light reacted to their faces.

Filmmaker: The pick-pocketing prowess of Smith and his con artist cohorts plays an important role in Focus, particularly in an early scene set in New Orleans during Super Bowl weekend in which Robbie earns her stripes by fleecing a bevy of tourists out of their valuables. How did you approach making these sleight-of-hand scenes convey the speed of the thievery without disorienting the audience?

Grobet: During that scene, [Will Smith’s character] is up on a balcony looking down and watching the whole thing happen. So I came up with the idea of using long lenses and shooting it as if [it’s Smith’s point of view]. So we just let the actors go, let the extras go and put the camera in the right spot to let it fish for shots.