“It Was a Bit of a Rough Ride”: David Robert Mitchell on It Follows 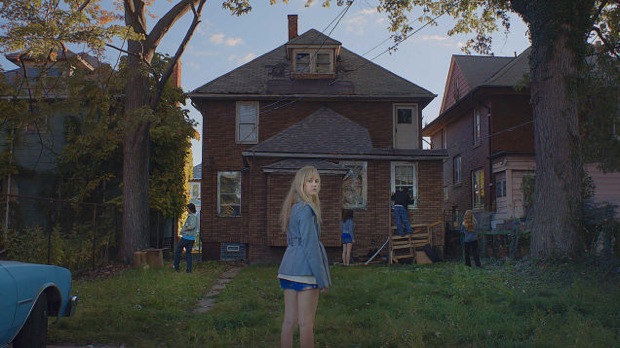 by Alec Kubas-Meyer
in Directors, Interviews
on Mar 19, 2015

Writer/director David Robert Mitchell has only released two films, but he has already shown himself to be a fascinating and diverse filmmaker. His first outing, 2010’s Myth of the American Sleepover, was a simple teen drama following a bunch of Detroit teenagers as they, well, had sleepovers. But for his sophomore effort, Mitchell created a horror film, and an excellent one at that. Despite the shift in genre, It Follows is very much a David Robert Mitchell production. It also follows a group of Detroit teens as they live their lives, and by focusing on creating believable characters, goes beyond genre conventions to create something unique and brilliant. When a young girl has sex with her boyfriend, he passes on something terrible. A creature with murderous intent begins to follow her, walking slowly towards her, until she dies or passes it on to someone else.

The first truly great movie of 2015 released last Friday, and I had a chance to sit down with the writer/director to discuss its deeper meaning and the difficulties of its production.

Filmmaker: Both It Follows and Myth of the American Sleepover have a timeless feel, especially with regards to technology. Is that a part of your style or more specific to these narratives?

Mitchell: It’s part of my style in the sense that I like not being locked into the rules of our natural world. I like being able to change some of the ground rules in creating a film, and that happens to be what I’ve done in the films. I like altering something just a little bit. It’s about creating something closer to a dream state (or a nightmare), and that’s something I like to do. Whether I’ll do that, maybe or maybe not. They’ll all be different in their own way. But I like the idea of changing things — sometimes simple things, sometimes significant aspects of the world, because that’s what movies can do. They can do that really well, and they don’t have to operate or exist in the world that we know. And nor should they, a lot of the time.

Filmmaker: You’ve said that you want to make a lot of different movies. Obviously your first two movies are very different. Does that mean you plan in the future to keep going? “Next I’ll do sci-fi, dramedy, etc.”?

Mitchell: That’s exactly what I’d like to do. The next one I think is gonna be a drama. (I think.) I also have kind of a mystery adventure with a little bit of comedy. I have a detective story. I have some science fiction. I have a lot of stuff. It’s just an issue of when can I convince people to give me money to do these things, then I’ll make them.

Filmmaker: Do you plan to keep working with teenagers?

Mitchell: I’ll probably do some other films that primarily deal with younger people, but I have a bunch of stuff with many different characters at many different age groups as well.

Filmmaker: When you were deciding to make the movie and structure it as an ominous thing that’s always following people who have sex, was it in your mind that you were following but also subverting ’70s/’80s slasher tropes?

Filmmaker: Is that a fair analysis?

Mitchell: Any take on a movie is “fair” if someone watches the film and that’s what they want to think. I’m a fan of an analytical approach to films, even if I don’t agree with them. I think it’s interesting, and generally valid. I know there are interpretations of It Follows that I don’t agree with, but they still have the right to have those opinions. Ultimately what I intend with the film would only matter so much as I think it matters. If other people see the film differently, then they have the right to.

Filmmaker: Do you intend to come out and explain what you were going for?

Mitchell: I’ll say some things in the vaguest way possible. I wrote it with several different things in mind in terms of layers of subtext. I intentionally left that open, and I’m trying not to make it about one specific thing. There are a few different things that people tend to gravitate towards, which make total sense to me, some very positive and some negative with regards to that interpretation. Some people have told me that I’m making a puritanical statement with the movie, and that’s one that kind of irks me. I’m not, or at least that’s not my intention.

But I completely understand why some people would read it that way. I don’t agree, but that’s fine. If someone wants to see it that way, cool. If someone reads it that way and is bothered by it, I mean that’s unfortunate, but maybe they like to be bothered. I don’t know. As for it being a new variation or response to the idea of sex equals death in horror films, it’s not such a literal thing. I also think it’s doing more than that. It’s not just about sex. That is the literal thing that’s on the surface of the movie, but it’s also about life, and death and sex and love are an integral part of that. But we’re getting into a too analytical view of the movie.

Filmmaker: I want to talk about the fascinating camerawork. What did you use for the shoot?

Mitchell: We shot with an ALEXA. A couple days were on a RED, like the wheelchair shot, which was done on an EPIC, which we used when we needed a lighter camera and some of the underwater stuff. Most of it was an ALEXA shot on an 18mm lens, except a few shots, and then the rest were slow zoom shots, obviously on a zoom lens. But I want to shoot in 35mm. I’ve done it on short films, but I want to do it on a feature. I think my next film will be digital as well, though, since it’s generally what we have to do.

Filmmaker: You’ve said in other interviews that you were going for an “objective” camera, but the camera movement seems designed to point the eye in a specific direction. Even so, the camerawork seems to defy horror conventions. There are zooms and movements that seem to suggest moments that never materialize. Were you trying to break expectations?

Mitchell: The honest answer is that it’s my approach to this kind of material. I am a huge horror fan, and I’m aware of how the genre works. I’ve seen a lot of horror films, and I get the language. For me, this was my version of a horror film. It’s definitely a horror film, but it’s pulling from other areas, working with some language of horror and taking language from other places. It changes the language somewhat. It wasn’t about tricking the audience, but I think that it does do that a bit, and it’s a happy merging of styles.

Filmmaker: Along those lines, the film doesn’t really have any jump scares, save that one with the child outside the shed.

Mitchell: I’ve heard a few people say that they only think there’s one, but sometimes they’ve been different. Some people think the ball is the one.

Filmmaker: But that’s not actually “scary.”

Mitchell: Yes! But see, I always think that jump scares are more jump startles and things that startle people. I tried to avoid them.

Filmmaker: I saw the film twice in three days, and it struck me that much of the film’s tension is derived from the score. Was it always intended to be so hard-hitting?

Mitchell: I always wanted really bold music. I didn’t know every aspect of it, but I knew I wanted Disasterpeace to do the music. I wanted an electronic score, something that could be very beautiful and have pretty melodies but also be confrontational and assault the audience. I felt like music in horror films is incredibly important. I knew that that was I wanted.

Filmmaker: You wrote the original script in a week. How much resemblance does that bear to the final product?

Mitchell: Very similar. I mean I definitely added things and took things away, but I think the second draft is very similar to what we ended up filming. I added a lot more to the first act and stretched that out. As I went on, and we got closer to production, I changed some of the set pieces just because I had to. Some of the things I wanted to do were too big. They were just not manageable with our budget. There was a really cool one that was there from the first draft that took place at this outdoor concert. It did some really interesting things with perspective that I think would have been really fun. But whatever. It’s OK.

Filmmaker: Were a lot of things that were removed due to the depressing realities of production?

Mitchell: Yes. Without fail, yes. Some of them were like, “I can try to do this, but if I do, then I can’t do that.” I fought and we pushed to do as much as we could, right to the breaking point of the places. You know, who doesn’t always want a little bit time or money? This one was a little tough.

Filmmaker: What part did you fight hardest for?

Mitchell: I think there was always a question of the slowness of the monster and the simplicity of it. People were asking, “Will it work?” and I just believed that it would. I didn’t really have any way of proving it, other than to go do it. It was a crazy, difficult film to put together under difficult circumstances. We had tons of trouble with getting locations and keeping things together. It was a bit of a rough ride. It’s nice to finish the thing, to be really direct.