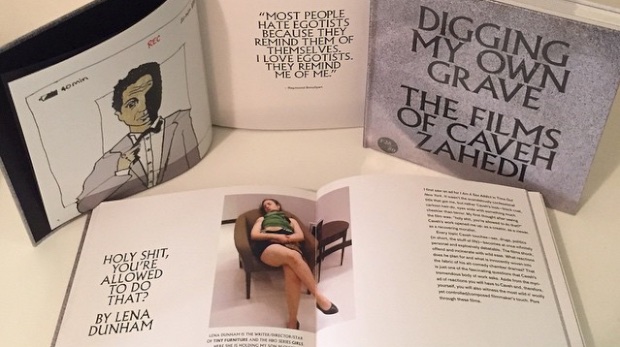 DVD is not dead. It’s the new vinyl. Unconvinced? Perhaps a six DVD set of an important and influential American director’s films, most of which have never been released on video, will change your mind. Factory 25’s “Digging My Own Grave: The Films of Caveh Zahedi” might be the most comprehensive collection of an independent filmmaker’s work available in one set: five feature films, over two dozen shorts, a feature-length series of video letters, and a plethora of extras, all housed in a handsome 100-plus page hardcover book … oh, not to mention an actual vinyl record.

Zahedi, best known for I Am a Sex Addict, has repeatedly taken the notion of autobiographical film to new, hyper-personal levels. His movies are brave attempts to confront taboos and dismantle facades of all kinds. They rarely have a fourth wall (Zahedi talks to the camera in almost every film), often involve drugs (mainly hallucinogens) and always explore some aspect of Zahedi himself on their way to a more universal truth. In a less sophisticated time these might have been called documentaries. Admirers like Lena Dunham implore us to “pour through these films,” and Richard Linklater has petitioned for a “fund to let Caveh do whatever he wants to do,” but there are also those who scream “narcissist” and dismiss his work outright. A collection such as this (30-some films about Caveh Zahedi) might not help dispel that opinion, but it does make it moot.

There’s so much here waiting to be discovered, but perhaps the most exciting, and certainly most overdue, is A Little Stiff, Zahedi’s first feature, which was well received at the 1991 Sundance Film Festival but undeservedly forgotten ever since. Zahedi came up with the idea after taking LSD and seeing a vision of the Buddha holding a flower in his palm. He writes in the box set book, “I immediately knew that the flower represented beauty and that the Buddha was trying to tell me that beauty is everywhere: it is already right in front of you so there is no need to go looking for it.” He decided then and there to make a film about the most ordinary thing he could think of — a recent crush he had on an art student. He asked that girl and, perhaps more boldly, the guy she liked, to play themselves in the movie. The result is way ahead of its time — a pitch-perfect, smart and subtlety hilarious minimalist masterpiece that should have launched his career. It didn’t; just as well. Zahedi struggled to find funding for the next 20 years, but the meaning of that flower always informed his work, and we, the audience, get to reap the rewards. In Hollywood that flower would’ve died.

Because of the personal and “all access” nature of his films, watching them collectively starts to feel like you are a part of his life, visiting and revisiting all those who inhabit it. People mentioned in one film are seen in another. A seemingly obscure work is referred to in one film, and you scan the contents and see that it’s included in the set. It’s a unique tapestry.

One of the most beautiful moments in Zahedi’s oeuvre is available for the first time in this set. Amanda Field, Zahedi’s wife, has her whole year chronicled right alongside Zahedi’s in his third feature film In the Bathtub of the World, but her first time in front of his lens is in an earlier video letter to filmmaker Jay Rosenblatt. It’s special not only because we know the important “role” she will play in his life, but because, as often happens in the cinema of Caveh Zahedi, something is captured that just isn’t in regular movies, something truly mystical that written scripts or carefully composed shots can attempt to arrive at but mostly fail: in this case, the awkward and hesitant beginnings of a relationship. Highlighting this subtle scene has already potentially harmed its effect. Let me just say we’re lucky to have it included.

The 100-plus page hardcover book is worth the price alone. It’s filled with wonderful testimonials from Zahedi’s most trusted collaborators, as well as statements, comics, open letters, and unsent emails from fans and contemporaries such as Jay Duplass, Dunham, Alison Bechdel, and Josh Safdie. Woven through it all is Zahedi’s own narrative of his life in cinema called “A Portrait of the Artist as a Complete Failure.” A hilarious page-turner with tons of heart and heartbreak, you’d swear certain parts must be fabricated if you weren’t convinced it was all true. This is Caveh Zahedi after all. He doesn’t work in fiction.

It might sound strange, but it excites me to have nearly all of Zahedi’s films in one beautiful, tightly bound book, that I can literally fling, like a frisbee, at those who need to discover him. If you already know Zahedi’s work, it’s most likely because someone turned you on to him. Now you get to pass it on. Factory 25 has made that a lot easier.