by Howard Feinstein
in Filmmaking
on Apr 9, 2015

“You’re dressed like a shepherd!” Driving around Milan, middle-aged Luigi Carbone (an unrecognizable Marco Leonardi, of Like Water for Chocolate fame) affectionately disparages his 20-year-old nephew, Leo (Giuseppe Fumo), before planting him in a job in his own industry. The only child has fled a Calabrian farm and the father who runs it, Luciano (Fabrizio Ferracane, master of fluctuating facial tics), who is Luigi’s oldest brother. Leo hopes for an exciting and lucrative life better tailored to his needs than herding: working with Luigi, his idol, Uncle Rocco (Peppino Mazzotta), and their childhood pal and staunch ally, Nicola (Stefano Priolo). Luciano has remained in their small home town of Africo, in the toe of the Italian boot, where he is in the uncertain business of agriculture. The other men relocated years before. Like the siblings’ father, they hustled and enriched themselves in the promising business of organized crime.

In the superb Black Souls (Anime Nere), directed by Francesco Munzi (Saimir), the Carbones are a powerful force in the ‘Ndragheta, the vicious, wealthy Calabrian mafia that has replaced the Sicilians as bosses in northern Italy. Like Luigi and Nicola, Leo is a hothead. Farming is not in the cards. His dream is to help settle blood feuds — in his own words, “to command respect,” which he deems his low-key, pious dad, who has kept away from the family occupation, too weak to accomplish. Trade in illicit goods and activities, like a stock market for gangsters, has its ups and downs, but the vitriolic antagonism between clans waging turf war has a continuous intergenerational charge that appeals to a high-school dropout like Leo, who otherwise has as few prospects as the media’s depiction of ISIS Volunteer Zero. 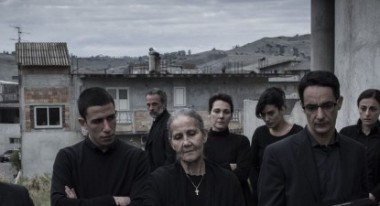 Early in the film, an affiliate of Carbone rival Bareca tries to put Leo down, no affection intended. “Ferrara said we Carbones are full of shit,” he explains later to his uncles. The off-the-cuff remark crosses the boy’s low threshold for disrespect. Unlike his dad, he cannot remain passive. Both efficient and obsessive, he grabs a rifle from a pile he hoards in a storehouse, quickly snorts a couple lines of coke (the lifeblood of the ‘Ndragheta) with Peppe (Pasquale Romeo), his most trusted friend, and unloads a few bullets at the windows and shutters of the offending man’s bar; rushes home to wash his clothes, pack, and say a quick addio to his detested dad and resigned mom; and runs to catch a train heading north.

According to the underworld’s strictly delineated codes of behavior, he is guilty of bad form. Even worse, he offers no apology. The victimless transgression triggers a domino effect in a shaky, highly stratified arena in which power is constantly tested and vengeance easily provoked. The slight act is an ominous foreboding.

Leo is an unthinking catalyst, an inexperienced, provincial nobody, but for the filmmaker, he is a yardstick with which to measure each of his uncles and, more significantly, his father. All undergo radical changes over the course of the film. We must include as well late grandfather Bastiano, assassinated a long time back by Bareca himself. Photographs hanging on the walls of Luciano’s home and social toasts dripping with thinly veiled threats to on-again-off-again confederates keep his memory alive in a social order where honor and loss of face become pivotal during ongoing power grabs.

Affable, extroverted Luigi and humorless action-figure Nicola are frontmen, impetuous, physical fellows with street smarts. They are introduced in the very first shot, standing on a wharf in a Dutch port awaiting a shipment of drugs. A small boat whisks them off for a meeting with Spanish buyers on a fancy docked ship that serves as a nocturnal club with curvy pole dancers — one of whom single Luigi arranges on the spot to bed that evening. (The family men stay faithful to their wives.) Throughout the film, he is loosely associated with water — rivers, ocean, rain. No connection is apparent: Lyricism is reason enough.

Stern, no-nonsense Rocco is the practical brain and economic minister of the clan. His enormous office with floor-to-ceiling glass rests at the top of a sleek skyscraper surrounded by construction sites that tie in with their nefarious enterprises. If Luigi is water, aloof Rocco is air. We observe him delegating the handling of stacks of Euros, notes in lingering close-up, before going to a temporary shack at ground level to — very courteously — pay the salaries of dozens of migrant workers, the builders of the new Italy. He is coolly confident and comfortable in the skin of a member of the nouveau ultra-rich. The palatial apartment he shares with beautiful wife Valeria (talented Slovak expat Barbora Bobulova) is appointed with ostentatious, pricey furniture and knickknacks. Instead of indulging Leo like his partners, he admonishes the powder keg at the dinner table: “I don’t like your way of thinking.”

We watch Luciano walking his sheep on a beach that runs along the lovely coast known as Ionica, which gently caresses the Ionian Sea at the base of the rugged Aspromonte range. He arranges produce in a high-tech greenhouse and treats animals in his side job as a vet. A man of the soil, his ambition appears to be the attainment of  grace. The entire family attends Mass: It’s an unwritten rule, especially since the village is small and their mother (Aurora Quattrochi, the embodiment of maternal suffering) still alive. Luciano also practices privately in an ancient crumbling church, lighting votives and praying before a statue of St. Francis, patron saint of animals, from which he scrapes powder to imbibe with a glass of water upon returning home.

He strives for wholeness in a social order that is as disruptive as the ‘Ndragheta and as fragmented as the winding roads and clashing architecture, a hodgepodge of Reggio Calabria’s charming old stone edifices and sterile contemporary structures. He loves his son, but Leo is a thorn in his side who rebels against everything he holds dear. Father and son do, however unconsciously, share a propensity for rage. Unlike Leo, Luciano represses his, concealing it behind an unassuming façade.

And the women? They are there — full stop. Well, not quite full. True to southern Italian culture and mafia society, they are agencies of strength, even if they occupy the background, or are stuck up front for show. The onus in the film, as in this insular world, is on the men. Often, though, the females are the ultimate survivors.

In Black Souls, violence in general is unspectacular: a shot in the head here, a slug in the heart there. British critic Lee Marshall, an Italian-based fellow reviewer at Screen Daily, has written that the film “belongs to an introspective strand of the Italian mafia genre.” Slitting a goat’s throat for a festival banquet is far bloodier than the bits of human carnage depicted. Motivations are too personal for anything like a St. Valentine’s Day massacre — so much so that they seep into otherwise sacrosanct filial bonds as well as the indestructible ties between longstanding amici. Of course, the Barecas and the Carbones are on a predetermined collision course that might easily have become the film’s climax, but the screenplay (by Munzi, Fabrizio Ruggirello, and Maurizio Braucci, adapted from the novel of the same name by Africo native Gioacchino Criaco) is both marvelously circuitous and wholly unpredictable. Enmity toward outsiders can be directed inward as well. 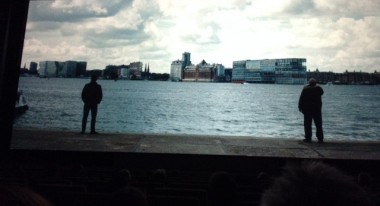 Without flash, Munzi balances authenticity and poetry. Africo is in fact a den of mafia activity. Young Fumo is a non-professional, as is Priolo, a town resident who Munzi discovered during a chat with author Criaco. Many bit-players and extras are also locals. You see it in the faces, many— like the professional mourners at one unlucky soul’s wake — too lined and gaunt to succeed at Cinecittà. On a top secret mission in support of Leo, Peppe walks through the kitchen of his home, passing his father and a brother with Down’s Syndrome. The youth, on-screen for a few seconds, is incidental. People like this do exist. Besides the decayed stone church, an offensive, ‘50s-era cathedral is an important setting. This is the reality of Africo, the city planning of which recalls Beauty and the Beast.

Munzi doesn’t foreground style for its own sake, but subtle and nuanced flourishes are present at the service of the narrative. Overall, the plotline is not especially complicated. The telling is what distinguishes this excellent film from others about the mob. Lighting, camera movement, and fluid editing replace exposition as driving forces. You could follow the thread with the sound muted.

He digresses to add texture. At a family barbecue, the camera stays with a band playing “Tarantella,” Italian folk music, Luigi singing loudly and drunkenly to meld drama and local color. He films not so much establishing shots as lengthy establishing sequences, which include material not absolutely necessary to the story, but enriching. For example, even before Leo has moved to Milan, the Carbone brothers and Nicola drive back to Africo. Gifted DP Vladan Radovic’s camera waltzes past hills, mountains, and sea, the light refracting on Luigi’s face, mournful violin heightening the effect. A sound bridge links them with another car in which Leo and Peppe are riding. The segue maintains the momentum. We get a fine aerial view of the white circular old section of the town before the second vehicle stops abruptly at the building housing Leo’s artillery.

Shadow-and-light effects nourish scenes, even those filmed in the dull interiors of the blandest buildings. It’s as if the Reggio Calabrian tourism authority insisted that Munzi capture the beauty not only of impressive spaces and enticing vistas, but also of the mundane and common. Continuing with the subjunctive, they could just as well have commanded him to engage fabulous composer Giuliano Taviani for the rich string and percussive score that alternates the whimsical and the melancholic.