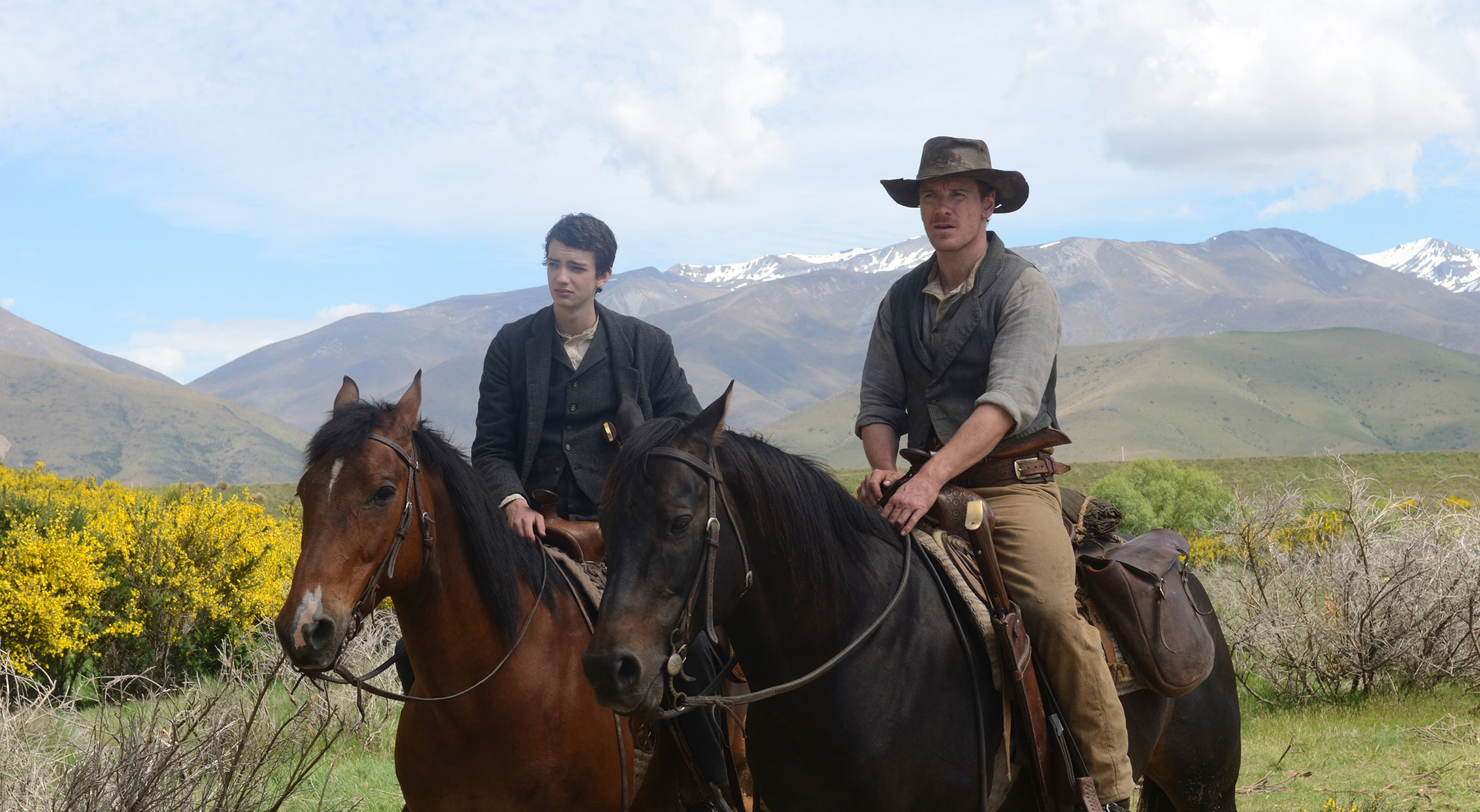 A trio of black musicians performs a Congolese song in a desolate area inhabited by relentless bounty hunters, surviving Native Americans, and individuals — enterprising or on-the-lam — seeking reinvention in the anonymous open frontier. A finely-choreographed triangular shootout puts both a general store and a starving family of German immigrants out of commission. Set in Colorado in 1870, five years after Lee’s surrender at Appomattox ended the Civil War, Slow West is positively — in every sense of the word — disconcerting.

Which is precisely Scottish filmmaker John Maclean’s ballsy aim. Wildly but meticulously blurring the boundaries between genres, he compels an adjustment of expectations. The western dominates the others, present but less palpable: coming-of-age drama, love story, road movie, bro-mance, satire and fairy tale. He does not imitate the classic Hollywood cowboy movie, nor does he transpose its most recognizable elements to a sci-fi (Westworld) or comedy scenario (Blazing Saddles, anyone?). He celebrates the differences between his revisions and the western’s inherent traditions. The postmodern film is a nutritious pastiche of distanced drama and affectionate humor.

Co-star Michael Fassbender is no “friend of Dorothy” (though one homoerotic scene grants him honorary status), but let’s overlook that fact and make analogous the old-school western and Auntie Em’s dull, black-and-white, rural Kansas in The Wizard of Oz. (How many aestheticians like John Ford were there, and how often was Monument Valley the singular location for indescribable beauty?) Stretching a bit, let’s draw a parallel between Maclean’s revamped version and the glorious Technicolor Land of Oz.

The spectacular beings, landscapes and events encountered in 1939 by the young Judy Garland after being felled by a tornado were all rooted in the familiar. Maclean so thoroughly studied the conventions of the Yanks’ favorite homegrown genre — including remixes by Sergio Leone, Sam Peckinpah, and Robert Altman — that he effectively maintains a consistent riff from beginning to end. Factoring into the equation is his resume as a brilliant musician (The Beta Band, The Aliens) and accomplished maker of shorts (Man on a Motorcycle and Pitch Black Heist, both starring Fassbender, for whom he wrote one of the two principal parts in Slow West, his first feature).

The film begins with the voiceover of Irish immigrant Silas Selleck (Fassbender, who as expected embodies the role), a rogue bounty hunter (no anomaly here) in pursuit of a young Scottish woman avoiding the law back home. He introduces with archaic, intentionally stilted prose an account of the adventures of naïve, bewitched 16-year-old Scottish aristocrat Jay Cavendish (co-star Kodi Smit-McPhee). (“Once up on a time…his name was Jay; her name was Rose”). The boy roams in search of the girl he considers his lost love, Rose Ross (South African-born Caren Pristorius, very promising), who just happens to be the object of Silas’s money-fueled hunt. World-weary Silas, who makes blase silent-screen icon Asta Nielsen seem downright enthusiastic, becomes Jay’s guide and protector — for a fee. The top of his agenda, however, remains the $2,000 dead-or-alive reward for Rose and her father, John (Rory McCann). They stand accused of murdering Jay’s father, Lord Cavendish, in the Highlands, the result of a freak accident precipitated by a shove after the pompous laird called the crofters “peasants” and smacked Rose in the kisser. (Maclean has said that he wanted to incorporate some of the class conflict in Scotland at the time into the film.) Silas is not the only one vying for what was then a large sum: eight members of the gang he split from shadow the two men. The angel-faced cub hasn’t a clue about the money and the frequent crossing of paths with these rough-edged, unkempt men. He’s too in love to be distracted. Facing obstacles every step of the way, he is on the kind of Hero’s Journey toward the prize described by Joseph Campbell. We know from the start that his love is unrequited, and may remain so. Add yet another genre to the list.

Maclean calls the film “an existential European road movie.” Fair enough. The duo rides across a wide swath of uncharted territory. The frontier is yet to be declared closed. Manifest Destiny is an ideological lure. The director gets a lot of play from successive uncanny incidents, sometimes like visual Cliff’s Notes, not unrelated to the old standards. Most are variants on business-as-usual for Silas, an old hand in these rituals and parts, but for cloistered Jay, they offer a foray into anthropology and history — updated, progressive lessons for us as well. He reassesses the era’s conventional wisdom. To frame his observations, he relies on sites that register as alternative. As if that were not enough, he opts for extremely low angles to film the protagonists and such natural formations as huge toadstools, a touch both macabre and surreal.

We glimpse a group of Native American women patiently weaving, another sadly walking the infamous Trail of Tears. Some of their men run from pistol-happy white folk, while others go on the offensive, shooting with bows and arrows while wearing greasepaint that acts as camouflage amidst the trees in a forest so dense that the bounty hunters are afraid to enter. (It provides a welcome refuge for Silas and Jay.) There was little empathy for Native Americans until the counterculture came about, but Maclean’s tableaus undercut the racism and xenophobia that were part and parcel of  the classic westerns.

It is implied that Kotori (Kalani Queypo), a handsome Native American who assists the Rosses, is, in Silas’s parlance, bedding Rose (something poor Jay has never done). Compare that to The Searchers, in which John Wayne is prepared to kill Natalie Wood for miscegenation, in that case a forced marriage with one of her captors. One bespectacled, vanilla-faced traveler is alone and seemingly decent and innocuous. He invites Jay, who has temporarily abandoned Silas, for dinner and a spot to sleep, and speaks eruditely of the book he is writing “recounting the destruction of aboriginal tribes…in the hope of preventing extinction or conversion to Christianity.” All the same, he is capable of enriching himself at the boy’s expense. Ordinary people in extraordinary situations. 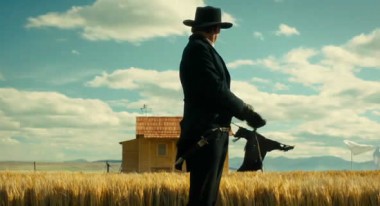 The landscape and buildings are hardly the stuff of Hollywood. (Production designer Kim Sinclair, a New Zealander, deserves special kudos. I’ll eat my Stetson if he and Maclean didn’t have fun making the movie — like stoners before dope became commonplace.) Excellent Irish d.p. Robbie Ryan, who has frequently collaborated with Andrea Arnold, filmed in what is known as McKenzie Country on New Zealand’s South Island — not in the vista-infested mountains and lakes beloved by tourists. The arid prairie and rocky crags of the American model are replaced by the region’s blooming flowers, tufts of tussock grasses, silver birch trees, and, in the distance, snow-capped peaks. It does not attempt to feign Colorado.

The general store Jay and Silas stumble onto is a blatantly fake rendition of its classic predecessor. It is pointedly isolated, with no other buildings in sight. The idea, of course, is to call attention to the inauthenticity of this important source of food and supplies. The interior does resemble those from the past, but the actions that take place there do not match anything in our collective memory bank. Neither does the blowback.

When Silas and Jay reach their destination, the boy exclaims, “Just like I imagined it!” Hold on. The smudge-free bungalow covered by perfectly-fitting light-colored planks is as foreign to the imagination as it is to the environment. A spaceship would be a better fit. Maclean plays with us. Outside are multiple signifiers of the western: scarecrow, weather vane, tall chaffs of wheat in organized rows. But these are, like the store, stand-alones that defy transparency. Like the house itself, they look like the props that they are, temporarily borrowed or built and placed undisguised on a patch of land, a theatrical last hope for the father-and-daughter renegades. He amps up the sound to further heighten incongruity: The sound of a hammer hitting nails is of volcanic magnitude. Can you keep making the leap of faith necessary to become immersed in a narrative that does not stop challenging your assumptions?

The characters are not the accustomed stereotypes. The bad guys are not so easily despised; they are interesting to look at and to listen to. They have back stories, a novelty in itself. One solo bounty hunter hides in the guise of a minister, having mastered the pleasantries expected by the gullible. He keeps up the pretense even among other men engaged in his real calling. The oldest member of the gang tells a long story around a campfire in which he and the subject he recalls exchange voices in scenes from different time periods, with sound bridges helping stitch the whole sequence together. One of his comrades (composer and Maclean regular Bryan Michael Mills) plays guitar and sings a ditty called “The Minstrel’s Song” directly to the camera. The most ominous, and enigmatic, is Payne (Ben Mendelsohn), decked out at all times in a huge fur coat, who tries to coax Silas, rather suggestively, to return to the fold after plying him and Jay with defense-diminishing absinthe.

And then there is Rose, a lead character even before we set eyes on her contemporary incarnation. We learn about her second-hand: in flashbacks to an adolescent’s crush in Scotland, in sketches on wanted posters, and more than anything else, through Jay’s oral recounts to the decreasingly bored Silas. We sense the latter’s growing obsession with his partner’s great love, someone he’s never met. The film cleverly details how his attraction plays itself out.

In the Scottish scenes, Rose dresses in patterned, girly peasant garb, which clashes with Jay’s dark, sober upper-crust suits. (The tinhorn wears a suit on horseback when we first meet him in the States.) When we finally see her in the film’s present, she is wearing men’s clothes, pants and a loose shirt, which make working the land and shooting encroachers easier than would a frock. Yet no matter what she has on, her beauty shines through. She is feminine, unlike the archetypal physically tough gals in the history of westerns, even when she’s firing round after round with a rifle. She is now hardened and exceedingly cautious.

Everything and everyone changes during the course of this marvelous artwork. The most marked transformation is Silas’s. The cool, quiet, and withdrawn burn-out credits his alteration to the same Jay whom he has always condescendingly referred to as kid, and whose unworldly optimism is the butt of his chuckles and jabs. Perhaps the film’s outstanding constants are the folksy plucking of guitar and the melancholy sound of violin in Jed Hurzel’s astonishing score.