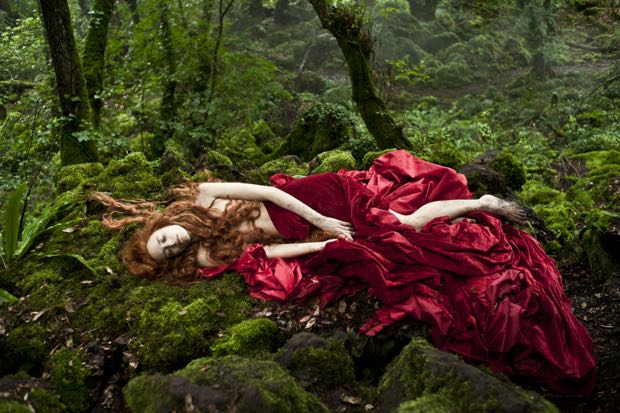 by Ariston Anderson
in Directors, Festivals & Events, Interviews
on May 18, 2015

Italian director Matteo Garrone is no stranger to Cannes. He picked up the Grand Prix twice for his previous films Gomorrah (2008), exploring the Camorra mafia, and Reality (2012), about society’s obsession with reality TV. With his third film in competition, Garrone has once again completely switched gears, debuting his first period piece and his first film shot in English, Tale of Tales.

Based on the fairytales of Giambattista Basile, the film has been the buzz of Cannes with its rich storytelling, outstanding performances, and lush cinematography. Going back to the raw and oftentimes brutal storytelling of early fairytales (Basile’s work influenced the Brothers Grimm and Hans Christian Andersen), Tale of Tales defies the typical genre film to deliver something completely unexpected.

Instead of casting first-time actors, as he has done in many of his previous films, Garrone cast Salma Hayek as a Spanish queen obsessed with having a son, John C. Reilly as her king who must slay a sea monster in order to fulfill her wish, Vincent Cassel as an oversexed king in search of love, Stacy Martin as a skin-changing queen, and Toby Jones as a delinquent king intent on raising a pet flea. Budgeted at 12 million Euros, the film is also Garrone’s biggest to date. Filmmaker sat down with Garrone in Cannes to discuss the rich source material and the common theme that runs throughout his work.

Filmmaker: What drew you to the fairytales of Giambattista Basile?

Garrone: First of all, I really fell in love with Basile’s stories. He is the origin of fairytales in Europe. I was struck also by the visual power and the originality of his stories and characters. I really started from Basile also because I wanted to get into trouble, as usual. I wanted to try this fantastic environment, the fantasy genre, which is not so common in Italy. I wanted to explore this genre while keeping a very personal look.

This is something I have experienced also in Gomorrah. There also I explored a genre in order then to give it my personal look. Whereas in my previous films I always started from reality and then I moved and I tried to transpose the reality into a sort of magical context, in this film I did the exact opposite. I started from magical elements and I tried to give them as much as realism as possible.

Filmmaker: You went from directing a real-life prison convict in your last film Reality to directing A-list actors in Tale of Tales. Did you have to change your directing style at all?

Garrone: My approach is always the same. I always ask my actors to be very creatively involved in defining their role. There is always a marriage between the person and the character. This film is based on the story of three women of three different ages, but it was written by four men. So I asked my actresses their opinion, how they felt about their characters, because I wanted them to customize their roles. My way of directing actors is based on creative exchanges, and this film aims at creating emotional impact. This is the way I work, which is always very instinctively.

Filmmaker: There are 50 tales in Basile’s book The Tale of Tales. How did you pick the three used in the film?

Garrone: It was a difficult choice, but we chose these three because they were these feminine characters that were interesting to us. I have to confess that there were two or three other stories which were interesting and we started to make the script for them. The same thing happened also with Gomorrah when we had to choose the story. There were four or five more which would have been interesting. But the structure is also the same, because we chose the stories and then we tried to intertwine them into one another. I’d like to have the opportunity to pick the stories I had to set aside and make either another film or maybe a TV series.

Filmmaker: Your film interprets fairytales in a much more graphic manner than, say, a Disney film. Do you have anything against the “Disneyfication” of stories?

Garrone: It depends which work you talk about, because inside Disney there is Pixar, which is my favorite filmmaker in this moment. They really do innovate. They’re genius. The Basile stories have something dark, because they come from popular stories which are of Medieval origin, and I was faithful to Basile. If you think about it, in the 17th century there was no literature specifically conceived for kids. These stories were written in order to entertain people, in general, adults and kids alike. This is the reason why they include some dark elements, horror and also violence: because at that time the society was violent, as is our society today. So they were like we are.

Calvino used to say that fairytales are true because fairytales contain archetypes and they’re universal and always modern. You have to think about the modernity of some passages, to think that in the 17th century Basile was anticipating aesthetic surgery because he was highlighting the fact that women want to look younger and they underwent some procedures, some sort of lifting of the tongue.

Filmmaker: How would you describe the filmmaking approach you take across your work?

Garrone: My approach is more instinctive and less cerebral because I approach the characters closely and I live with them in their adventure. In Gomorrah, you see the problem from outside. Instead, I always see it from inside, in order to see how an individual is contaminated by outside factors. In Reality, you had this man who lost his identity, following a sort of general contagion, because he was pushed by his family to do something with his life. In Tale of Tales, I also adopt this inside out approach. So if we have to see a common denominator throughout the film, this is the desire which turns into obsession and then has self-destroying consequences for them. This is a quite recurrent theme in my films.