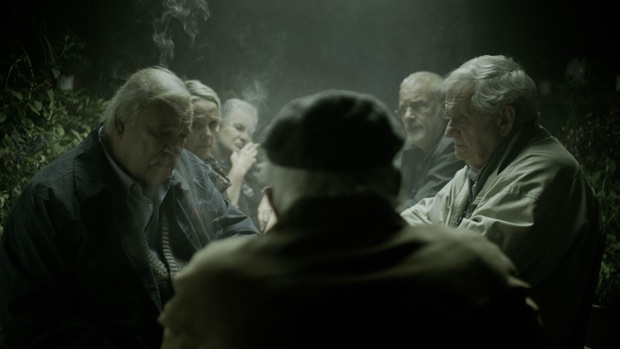 Such a rare thrill to see films with seniors who have credible back stories and channel a lifetime of experience toward the resolution of whatever issues they currently face. The lead characters in The Farewell Party, a delightfully dark Israeli comedy (perhaps adorable tragicomedy is more on point), are full-blooded humans, not vampiric nasties or one-dimensional goody two shoes. They converse with delight and share their joys, but they also threaten, backbite, and blackmail. Each has attachments, with ups and downs — not so different from young people, as it turns out.

At about the halfway point, a group of long-time friends in their mid- to upper-seventies are driving back from the suburbs to the modern Jerusalem retirement home where they have chosen to live — rather than die. This is not a facetious point: Their newfound mission is to aid a few of the willing suffering and unwell inside and outside the facility by expediting their departure — accelerating their shiva. They are returning from duty at the home of a pain-ravaged, terminally ill woman whose husband has worn them down with non-negotiable pleas for assistance when, all of a sudden, they break into a song called “In the Neverland,” a sweetly melancholic, resigned plea for passage to a paradisiacal state of relief. The passengers take turns, chanting lyrics of longing like “Take me there now/The land I am yearning for.” 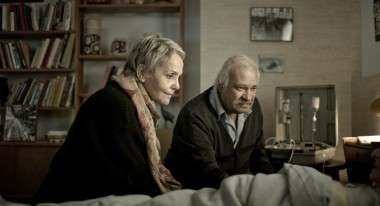 Co-directors Sharon Maymon and Tal Granit up the ante on this non-narrative commentary with additional lines sung by a few past recipients of their beneficent euthanasia, theoretically filmed just before checking out. Logic is not a factor here. The last we had seen them, they were deceased, a simple Kevorkianesque machine assembled by principal protagonist Yehezkel (iconic Israeli comic Ze’ev Revah) having efficiently fulfilled its purpose. The melody ends with the image of a body bag being thrown over the elderly lady they had visited just minutes before. This has been a pause: The plotline continues where it had left off.

The sequence toys with shifting temporality: for example, halting the action, moving into reverse. It is of necessity precise, disciplined. Maymon and Granit create a smooth, fairly seamless film, for the most part conventionally constructed, a slow dolly shot the most extreme formal strategy. But…they sprinkle perfectly timed moments along the way to evoke unconscious responses in the viewer. (The rhythm is so steady that when the filmmakers opt for a double jump cut at the funeral of one of the recipients of their missions of mercy, it has tremendous dramatic weight.) This is how humor functions: it’s a cliché, but comedy is the most difficult genre to direct, at least if you subscribe to Freud’s theories on jokes and the unconscious. In The Farewell Party, the abundant funny stuff might be verbal or physical. Even though the characters speak Hebrew, an outsider can discern a variety of accents, mostly Ashkenazic, from the same parts of Eastern Europe where Freud gathered jokes to elaborate upon his radical hypotheses.

Sometimes a joke is just a joke, like when one yenta sarcastically kvetches to a companion while she waits for the house physician (a retired veterinarian) to swim across the pool to talk to her, “By the time he gets here, my husband will be dead!” “We should sue this place for malpractice!” exclaims one of the death machine group, running through the lobby immediately following an administration of a lethal dose to a needy patient. Or with physical comedy, such as the recurring knocking over of a nurse’s tray table by one of the key principals — sometimes out of klutziness, at other times to purposely distract attention from the angels’ work. Repetition is, of course, a useful tool for building humor. But when redundancy is connected to absurd misunderstandings between characters, one’s mirth threshold simply disappears. A young cop gives the oldsters a speeding ticket and takes the uncontrollable tears they are shedding just after a mercy killing for financial anxiety. The scene is hilarious the first time it happens, belly-laughable the second.

There are related scenes, such as when a circuit breaker kicks in at the exact second one desperate woman has her thumb on the button of the electric mechanism that is intended to take her out. She calls the interruption of service a sign from God, enabling a humorous moment to become funnier. 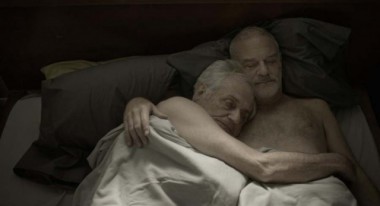 The filmmakers apply their keen sense of timing not only to the comic but to other aspects of Jewish culture and tradition, as if they were evaluating a small catalog’s worth of habits and behavior. The most apparent: argument and guilt. Disputing, contentious Jews are not merely stereotypes and objects of affectionate derision. Detailed debate over the minutiae of the Torah is a cornerstone of Talmudic (oral) tradition. In The Farewell Party, the central characters come up against authorities in the home, especially over care of their loved ones; and the close friends disagree with one another on just about everything. In line with the tone of the rest of the film, these nuggets are most often played for laughs, clockwork timing essential.

And guilt! Where do we begin? Imparting it is a weapon, a ploy for coming out on top when discord is in the air by reminding ourselves and others of our essentially sinful nature and its repercussions in our daily lives. Breaking it down, we have a lose-lose proposition with little or no wiggle room. Once again, to execute even an approximate dramatization of the process and its effects necessitates impeccable choreography, facial tics and gestures front and center.

These pals live at Achvat Vakim, a brick-and-glass edifice in a green setting where singles and couples have their own apartments but dine together and engage in group activities in the public areas. It’s more independent than what are called assisted living facilities in the U.S. The very long empty corridors that must be traversed every time a person walks to his or her unit sets the psychological and emotional tone for the home, no matter how luxe it appears from the exterior. One of the managers tactlessly notes that they do not have facilities for the mentally frail, so on paper the building is less an institution than a collection of condos or apartments for seniors who maintain sufficient energy and faculties.

At advanced age, life becomes more and more unpredictable. One spouse might be in relatively fine shape, while the other becomes ravaged by an incurable disease or begins to lose cognitive skills. This is where the secret gang enters the picture, to mediate with someone’s partner the degree of the ill person’s autonomy. The directors’ statement in the press notes opens with the following quotation from the section of the “Mishnah” (written law) known as “Ethics of the Fathers,” or “Chapters of the Fathers,” which deals with moral principles and interpersonal relationships: “For against your will you are formed, against your will you are born, against your will you live.” Maymon and Granit assume a position on the one choice you might have if autonomy predominates: when to die. 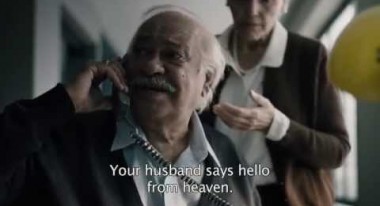 At the beginning of the movie, Yana (Aliza Rozen) pleads with some of her lifelong pals to help put her beloved husband Max (Shmuel Wolf) out of his constant pain. Yehezkel being a tinkerer and a man of compassion (he phones extremely sick residents pretending to be a sonorous God to coax them into keeping up the good fight), he becomes her only hope. They find supplies to build a machine that works by time-release and the opiates necessary to realize the task without leaving traces of foul play.

For this first application, Max testifies and grants authorization on video; after tools and meds change hands, he pushes the control button. Everyone else in attendance is absolved. As more cases arise, two more join the underground group: the new doctor, Daniel (Ilan Dar), who has just moved in; and his friend Raffi Segal (Rafael Tabor), a married former police detective. (Many of the actors, even in the more serious roles, are best known domestically as comedians — the result of a conscious effort to add a light touch to profound, dark social material.)

A major problem for the crowd is Levana (Levana Finkelshtein), Yehezkel’s lovely wife, who is vehemently against assisted suicide. Unfortunately for her, she is in the early stages of Alzheimer’s, in that uncomfortable space comparable to Julianne Moore’s early on in Still Alice when she recognizes her situation intellectually but nevertheless falls prey to its damage. A large chunk of plotline skillfully charts her vacillating position.

Maymon and Granit balance comedy with an appropriate degree of serious emotion. Every day at this juncture of life is critical: Sickness may strike you or someone you love with little or no warning. So many losses take their toll. The movie’s stand is that there are ways to help get through it all. After the uptight building manager chews out the clique for sitting naked on a patio at night, drinking and smoking dope, the slowly diminishing but still wise Levana walks over and whispers conspiratorially in her ear, “Inside they’re like kids. Only their bodies have aged.”