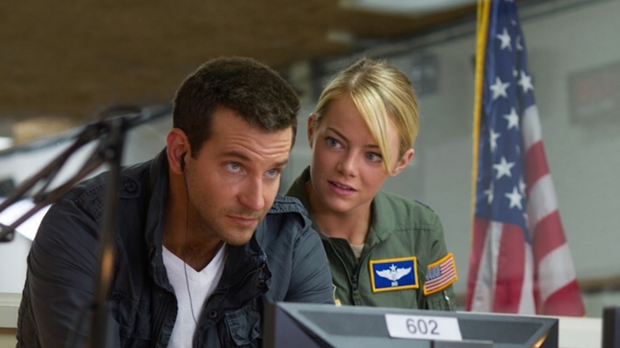 If you’re a dedicated Cameron Crowe fan, you may have been forced to spend part of the last 15 years repeatedly explaining why. Since Almost Famous, Crowe’s non-documentary feature output has included two movies instantly/violently rejected by both critics and the public (Vanilla Sky, Elizabethtown) and one semi-soft family film that got a parody Twitter account and endless derision months before release solely due to the admittedly risible title We Bought a Zoo. His latest, Aloha, also has a dumb title and arrives savaged by Amy Pascal in emails made public as part of the Sony hack and ominously unscreened for press until the week of release, with reviews (predictably, unimaginatively brutal) embargoed until three hours before the first showtime.

Aloha attempts to resolve two complex potential romances while simultaneously sounding the alarm against the military-industrial complex (!) and contemplating the ongoing marginalization of native Hawaiians. The starting point is a familiar Crowe formula: a promising former tyro talent whose success and/or morality has been compromised is stuck in some kind of downward depressive spiral and finds professional and personal redemption via a female catalyst. In this case the unlikely male object of desire is Brian Gilcrest (Bradley Cooper), a formerly NASA-employed idealist who wound up in post-invasion Afghanistan working for a contractor. “There was greatness in this guy,” muses Captain Allison Ng (Emma Stone), his armed forces liaison while in Hawaii to arrange a blessing from the natives for a routine Navy ceremony. (Unavoidable to note that every Crowe movie for a while now has seemed to not-so-obliquely be about public redemption after the last one’s poor reception.)

It will become Ng’s job to restore Gilcrest’s faith in himself, per his prototypically Crowe-ian formulation “I need you to believe in me.” Cooper and Stone’s early sparring seems too forcedly cute and rushed tempo-wise (perhaps a casualty of the 35ish minutes of cuts Pascal demanded), but the film hits a sustainable cruising altitude when Gilcrest arrives for dinner with ex Tracy Woodside (Rachel McAdams), the one who got away and was promptly snapped up by fellow pilot Woody (John Krasinski). “I’m stressed! I’m stressed!” she vents about her marriage, quickly spiraling downwards into long-suppressed anger: “I really loved you and you wrecked everything.” One budding romance over here, one potential love triangle over here, but the stage isn’t even close to set.

Assuredly Crowe’s hyper-aggressive tactics for generating warm-and-fuzzies is not to all tastes. His approach is the same as the one ZAZ used to take to gags: if you don’t like the magic moment he’s trying to achieve, another one will be along momentarily. And there’s no denying that Crowe’s ideas about romance (and his conception of female characters in general) is limited and (the word of the year) #problematic. Let’s note in passing that assigning to one’s partner the primary role of helpmate for the depressed is generally considered, at best, not very flattering. That dynamic is a preordained part of Crowe’s work, as are the constant prods towards an overwhelming moment of feeling: what’s surprising is how often he gets there. (Fair warning though: if you didn’t like Crowe before, you’re not going to start now.) Since the craft-wise frankly pedestrian Say Anything, Crowe’s camera movements have become increasingly bold, his colors aggressively saturated, characters’ behavior increasingly divorced from the real world. Where Jerry Maguire was merely emotionally heightened, Elizabethtown made a clean break altogether from recognizably naturalistic human behavior into the realm of the purely fantastical, which may have been part of the reception problem: people expect coherent dramatic logic and normal scenes when that’s not even close to the agenda anymore.

Part of the reason Aloha works is because Crowe never holds back: he is never less than 100% committed to really Going For It, which doesn’t necessarily mean an endless series of epiphanies, and it’s certainly not all about love. No one here speaks in a normal fashion: they’re always playing with each other and their phrasings, ramping up and slowing down their rhythms, performing elaborate verbal curlicues around each other. This is the bastardized legacy of Lubitsch transmitted to Crowe through his conversations with Billy Wilder, life as a constant state of performative play. Whether you find this charming, cloying or both is a little irrelevant: rote connective tissue is systematically rejected for something more aggressive.

Uninterested in merely repeatedly reshuffling the romantic deck, Crowe quickly introduces noted Hawaiian nationalist Dennis “Bumpy” KanAhele (as himself), and the film regularly returns to nagging mentions of Hawaii’s land-grab annexation and the military-native dynamic. (I’m not remotely qualified to evaluate how well Crowe does in dealing with this issue — for all I know he found the first native person willing to participate and doesn’t know a thing about the topic otherwise — but it’s certainly not quickly swept aside.) Aloha also turns its attention to Gilcrest’s time in Afghanistan; it’s unexpected that a Hollywood romantic dramedy would mark some kind of per-minute percentage high trying to come to some kind of terms with our recent overseas adventures in cynically justified warfare, but here we are.

In one of those zeitgeist-y confluences that means nothing but must surely speak to something, Aloha pairs oddly appositely with Tomorrowland. Both films use NASA’s decline as a stand-in for some kind of larger loss: in the latter, of national idealism, in the former as part of an oddly specific warning about government being appropriated by private businesses who do not have our best interests at heart. Venal capitalism is played by Bill Murray as a particularly dissolute-looking billionaire. In Crowe’s best party scene since Say Anything, he takes to the dancefloor with Stone, who kicks her heels off; they land exactly on a Christmas tree’s branches, another indication we’ve again left the realm of plausible naturalism.

Aloha builds to a rather unexpectedly nutsoid finale in which (put vaguely) the collective power of all of pop culture helps save the world. It’s the inverse of Vanilla Sky‘s climax, in which all of Tom Cruise’s memories are not of people in his own life but the albums, TV and movies he’s consumed here that’s reconfigured as a positive thing. Cameron Crowe’s gonna Cameron Crowe (there is, as usual, a pretty unimaginative soundtrack that wallpapers everything), and whether that’s a taste worth acquiring is very much up arguable. But it seems odd to charge him with simply repeating himself when few movies this year are going to try to cover this much ground that’s new for both him and us. The movie may be overstuffed (and my jaded eyes may be just over-responding to lunatic novelty), but it’s certainly not under-trying, and it never runs out of unexpected left turns. Not that idiosyncracy should necessarily be valued for its own sake, but this has more than enough delightful moments flowing into each other to justify itself. So I thought, but I’ve already read more than a few reviews claiming this as some kind of MST3K-worthy calamity, and all I can say is: enjoy your next 20 Marvel summers!