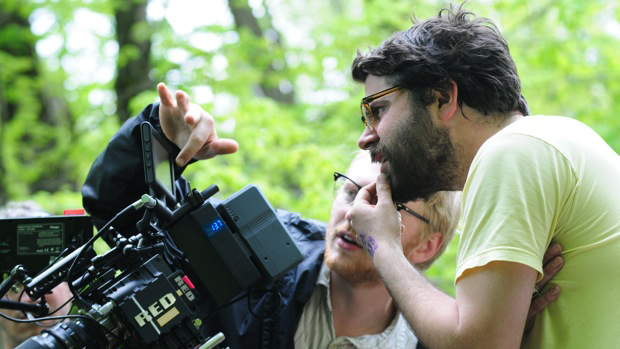 DP Cal Robertson and Eddie Mullins on the set of Doomsdays

by Eddie Mullins
in Filmmaking, Production
on Jun 1, 2015

Nobody ever comes out of a movie and says “great locations!” Unless the film is set someplace unusual like the Amazon or the UN or on an elaborately constructed set that makes locations a talking point, they’re largely taken for granted. But locations are nevertheless deeply felt by audiences whether they announce themselves or not, informing mood, camerawork, production design and performance. They’re also a cheap way to make an inexpensive film stand out, or at the very least make it look more expensive than it is.

Among the oft-repeated cardinal rules of low-/no-budge filmmaking, there are two that apply specifically to locations. The first is to capitalize on the ones you already have or can get for free. This seems obvious, yet it’s commonly ignored. I have a friend who set their first low-budget effort in a chateau. This was lunacy and, of course, had to be changed. I have another that set half their film in a New York City bar, not realizing that bars in NYC are one of the hardest and most expensive locations to lock down even for a day. I’m not suggesting you compromise your dreams, but it never hurts to think like a producer. Start small. Can you use your own apartment/house? Your neighbor’s? Who likes you enough to tolerate the full-on home invasion that is a film shoot? Ideally this line of questioning will begin at the writing stage. You want your big challenges to be creative, not logistical.

I live in a small Hudson Valley town and chose to set my debut feature Doomsdays there, using my house as both a production office and, naturally, a key location. I knew early on the story would require a lot of houses, so I started canvassing well before the script was finished. Some friends came through right away, but nowhere near enough. Then I reached out to a contractor friend. Bingo: he’d done work on half the places in town, and knew right off who’d be sympathetic to my plight. As an added bonus, he brokered some of the deals without my ever meeting the owners. It wasn’t until the last stages of pre-production that I finally resorted to rentals, and even then only in one or two cases. Almost all of the money I’d budgeted for locations went to other things.

The second cardinal rule about locations is to keep their number to a minimum, the logic being that company moves are expensive, time-consuming and often wasteful. The good news is that it’s not hard to make a virtue of this constraint. Plenty of brilliant filmmakers, regardless of budget, have gone so far as to confine themselves to a single location. My favorite recent example is Dogtooth, but Hitchcock experimented with idea multiple times (Rear Window, Rope), as did Polanski (Repulsion, The Tenant). A limited number of locations doesn’t have to mean a cheap, gimmicky movie.

Having said that, I have to confess that I completely ignored this rule on my own production. Doomsdays is about squatters moving from house to house and there was no getting around it. I may not have spent much money, but I had a thoroughly unrealistic ratio of locations (40) to shooting days (18). No practical producer would’ve allowed this, but since I was producing myself, there was no one to reign me in. My confidence that this would work was based on my shooting strategy. I wanted to make a film without standard coverage and continuity editing. Instead, the idea was to shoot single-shot scenes and try to maintain visual interest through choreography and staging rather than cutting. This meant that there was only one set-up per scene — no close-ups, medium shots, over-the-shoulders, or tracking. Because of the time this saved, and the close proximity of the locations, we were often able to hit three a day. Still, it was something of a high-wire act that I don’t recommend.

In addition to the two biggies, there are a few more fine-grained strategies that will help your management of locations go smoothly. Chief among them is familiarizing your crew with the locations prior to the shoot. It’s self-evident that you want your director of photography and gaffer to see them beforehand, but you should also include your line producer, unit production manager, and whoever else you have running the show behind-the-scenes. While you’re pre-planning the shots, they can apply themselves to problems of staging areas, parking, craft services, et al. Being able to hit the ground running on shoot days is invaluable.

It’s also a wise idea to designate a location manager, even if it’s just a production assistant or a friend with no experience. What you want is someone ultra-well-mannered and polite that will be in regular communication with the various property owners who’ve volunteered. At the very minimum, these people need to be called a few days before the shoot to confirm, then again the day before, and still again the day after in order to thank them earnestly and copiously. One of the reasons it’s so hard to shoot in New York is that too many property owners have already been burned by inconsiderate filmmakers. As in all things, be gracious and respectful — you may want to shoot there again.

Lastly, a few words on location agreements. Agreement forms tend to be fairly boilerplate and you can easily download one from the internet, but beware. Several times I’ve encountered a template that includes a blank space for the amount of compensation provided. I don’t recommend using this, as it will naturally lead the property owner to think that some kind of payment is standard. Even if you’ve already verbally negotiated a location for free, there’s still the potential that the owner will see this upon signing and feel swindled. This can become an even more troublesome issue if the signing happens after the shoot rather than before. If you’ve run over schedule, broken something, or just generally worn out someone’s patience, you may find yourself having to renegotiate.

That’s what I know about locations. Please put it to good use!

Doomsdays opens in theaters and hits VOD on Friday, June 5. For more information on cities and theatrical venues, click here.