Pain, Gain: The Sublime Stations of the Cross 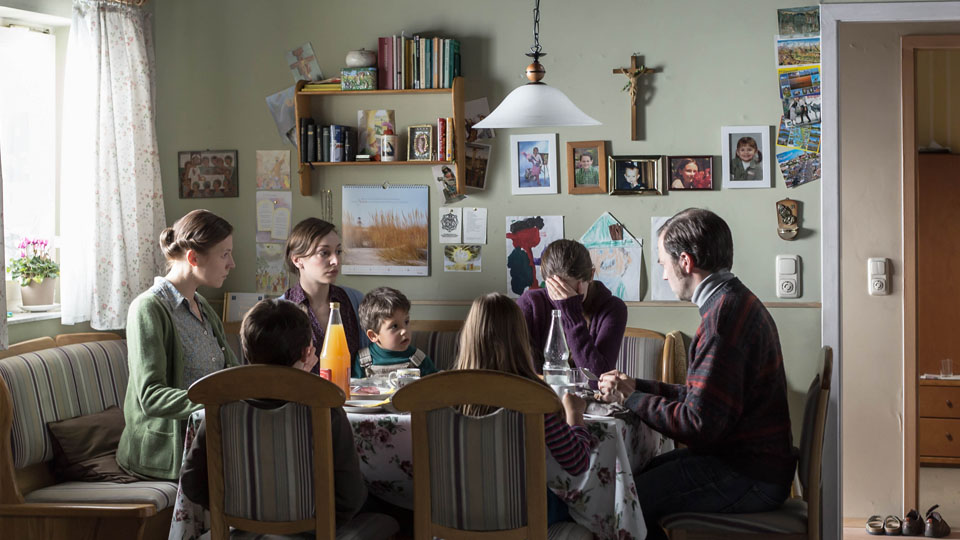 by Howard Feinstein
in Filmmaking
on Jul 9, 2015

How would you transpose 14 sequential artworks on canvas that hail back to the 15th century to contemporary technology and artistic sensibilities? The closest approximation might be a group of photographs, or a film comprised only of a series of fixed shots. Stringing together the individual tableaux would create a slightly disjointed narrative disregarding conventions that have been in effect for sequences for over a century. Even though each shot could stand on its own, there is a flow to the whole. Continuity is implicit, not laid out neatly with eye-line matches, shot-reverse shot set-ups, and cutting from establishing shots to more detailed, perhaps closer ones.

Classical continuity editing does not offer much scanning time. Scenes are cut for relatively rapid consumption. In the tableau scenario, you become glued to a solitary image until its impact is depleted, the information it conveys, exhausted. This is the approach deftly deployed by German director Dietrich Brüggemann in the haunting Stations of the Cross, complemented by the precision cinematography of Alexander Sass, which, though widescreen, remains within the parameters of an extremely spare aesthetic. 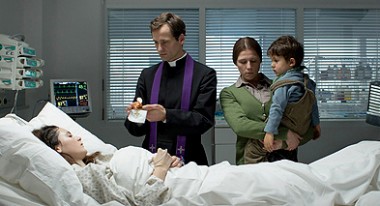 The film fits into what director Paul Schrader, who was raised in the Calvinist Christian Reformed Church, calls transcendental style in the films of Bresson, Dreyer, and Ozu, who embraced minimalism to evoke the spiritual. Writer Scott Jeffery calls it an ascetic aesthetic. For the flipside, Jeffery has coined the term ecstatic aesthetic, which applies more to states of ecstasy, closer to psychedelia. His examples: Darren Aronofsky’s The Fountain and Gaspar Noé’s Enter the Void. For him, Stanley Kubrick’s 2001: A Space Odyssey bridges the gap between the two opposite artistic styles, but that is a whole other story.

In Christianity, the Stations of the Cross are frozen images of Christ walking toward the site of his crucifixion — people he encounters, moments when he stumbles and falls — and the event itself. They are found in places like the walls of a nave. The premise is that the reflective viewer accompanies Jesus through his final journey, mimicking his path to salvation.

Each has a number and a title going back eight centuries. Brüggemann, who co-wrote the screenplay with his sister Anna, retains the labels for his film’s contemporary images: home, church, library, classroom, car, gym, hospital, cemetery. The spirit and the emotional resonance of the visual are constants. A teen-aged girl strives for sainthood just as an ancestor might have. The tools are perhaps different, but the ideology, the power of belief is the same.

The modern girl’s misguided mission stems from the retrograde stance of the Society of St. Pius X (in the film, the Society of St. Paul), a sect of Catholics who reject Vatican II and the changes it implemented. Severely legalistic, with nearly blind adherence to rules, the fringe group is more about strictures than faith. It denies much of what most of us consider pleasurable. The devil lurks behind rhythmic music, colorful billboards, makeup. Conceit and vanity are mortal sins. Symbols outweigh what they represent. Like other fundamentalist, exclusivist Abrahamic religious groups, it considers itself the only way. The offshoot promotes separateness from other factions, but complete commitment to its own authority figures. Questioning a parent or priest is out of the question. Accept what’s shoved down your throat. Obey, obey, obey. 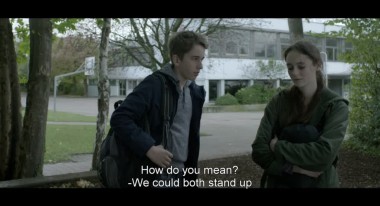 Few characters emit anything positive toward anyone else. Father Weber (Florian Stetter) instructs at the church school less out of genuine care than didacticism, the passing on of constraints perpetrating an anachronistic order that holdouts refuse to relinquish. The religion is one of control, contempt, and fear, as well as paranoia that extinction is just around the corner if you’re not vigilant. Its legalism is far from natural, even further from affectionate. It is much more insidious than the well-known insistence on reciting mass in Latin.

The members of the sect are so obsessed with evil that the invisible Satan could well be the film’s principal character. He and his manifestations in the threatening secular world are frequently mentioned. If something does not fit snugly into the religion’s limited set of beliefs, it is termed satanic, a must to avoid.

Maria Gottler (a marvelous Lea van Acken), the film’s 14-year-old protagonist, misinterprets the church’s extreme dogmatic teachings, and what it means to be, as Father Weber defines it, a warrior for Christ. She is bullied tactfully by the priest, not so graciously by her classmates and dictatorial mother (a superb, frightening Franziska Weisz). Maria can’t fathom that God might not have a plan for her, something she expects from her lessons, but those in power around her on earth just might. The process translates into running a perfectly sweet innocent into the ground, filling her with self-loathing, and pushing her into a state in which her body and psyche are unable to meet the exaggerated demands she has made on herself.

Maria’s stations of the cross are of an era and culture far different from those of Christ, but they are congruent enough with the originals to elicit the same empathy felt by viewers in front of the church art. Film spectator and worshipper suffer through a similar nightmare.

Brüggemann does not make her transformation facile or predictable. Just when we think the browbeaten girl has hit rock bottom, an event — perhaps a miracle — takes place, one which in some ways compensates for her deterioration. It offers the possibility that what she has internalized from the rigid dogma might be rooted in some version of truth. She wanted to sacrifice herself in an exchange that would insure that her four-year-old mute brother, Johannes (Linus Fluhr), would begin to speak. Can malnutrition and self-induced pneumonia alter the course of nature? How do you explain it when it actually happens?

The director is an exceptional stylist of the less-is-more school. Although many of his frames are symmetrical, others are not — but they are all balanced. Shelves full of colored books resting diagonally on one side of the frame work in tandem with evenly placed rectangular tables on the other. The characters occupy spaces within these carefully measured and calculated settings, which do not distract from them and their messages. The rigorous placement enables the three shots in which there is some camera movement to exert particularly strong dramatic force. In fact, the missing fifteenth station (Christ’s ascension) is present not as a tableau but as a single camera sweep, a swirl and an upward tilt that wraps up with grace (in all its variations) everything that has taken place before it.

Brüggemann inserts welcome relief humor into the severe narrative. There are many odd and funny scenes, in part because the ideas of the congregants sound so absurd, and often quaint, when spoken aloud. “Your alarm clock went off in time!” Father Weber tells Maria at pre-Communion confession, where he confuses her into thinking that all her interaction with gentle student Christian (Moritz Knapp) is motivated by carnal desire — even if that would mean his come-on would be, “Are you working on the quadratic equations?”

I’m not sure which is worse: Christian attends the liberal church Don Bosco and sings in a choir there that includes both Bach and gospel music in its repertoire, whereas Maria’s sect prays at the reactionary St. Athanius, which is choirless; or the realization that Father Weber’s take on the encounter is an out-of-fashion explanation of rape, in which the female is automatically a guilty vamp.

Maria’s shrewish mother is a one-dimensional clown figure. She imposes her constrained worldview vehemently on everyone, including scientists and her own family members. Sadly, Maria begins to out-legalize Mutter the further she progresses along her own via Dolorosa.

The Gottler home is neither happy nor pleasant. Servitude replaces love and warmth. For reasons we ultimately put together, Maria bears the brunt of the nastiness. Forget her father (Klaus Michael Kamp): He gave up long ago and retreated into a shell that he thinks protects him from his wife.

The only family member who maintains any kind of equilibrium is Bernadette (Lucie Aron), the French au pair. She subscribes to a much more moderate form of Christianity, one based on valuing others and expressing love and concern. It is she Maria turns to when she feels most alone, defeated. She comforts the troubled girl, in spite of the mother’s snotty reprimands.

Bernadette has the most ludicrous — and understated — line in the film. While pale, rail-thin Maria lies in a hospital bed fantasizing about the upcoming ritual marking entrance to adulthood, the normally soft-spoken nanny barks, “You don’t need Holy Communion! You need food!”