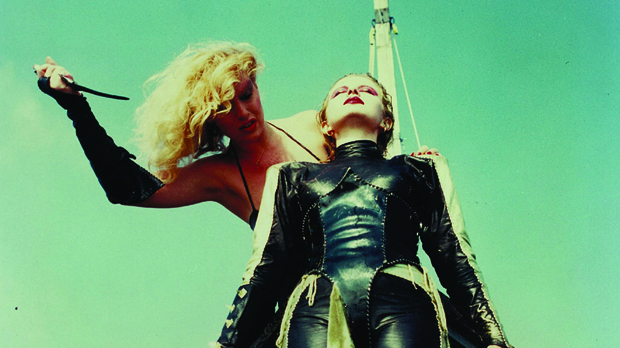 Patricia White, a scholar of feminist film and professor in the Film and Media Studies program at Swarthmore College, recently published a book titled Women’s Cinema, World Cinema: Projecting Contemporary Feminisms (Duke University Press, 2015). The book explores the work of women directors globally, arguing that not only are many of these directors shaping a 21st-century arthouse aesthetic, but also that they are transforming film politics and projecting “a transnational feminist social vision.” The book invites us to rethink both women’s cinema and world cinema and uses the notion of projection as a “vision of futurity.” Writing in the introduction, White claims, “Women’s access to these influential forms of social vision — cinema and feminism — has already transformed the future.”

This idea of transforming the future applies as well to the teaching of feminist cinema in the university classroom, and indeed, White teaches an undergraduate course titled “Feminist Film and Media Studies.” The course begins with Laura Mulvey’s iconic 1975 essay, “Visual Pleasure and Narrative Cinema,” which calls for a radical analysis of the entire apparatus of cinema as a machine for sustaining male power. Feminist film studies carried this critique forward for three decades, while also engaging in the reclamation of lost work by women from the past and the inclusion of critically neglected work by women in the present. Overall, the scholarship produced under the umbrella of feminist film studies has had a profound impact both on the field and on teaching. However, as White readily agrees, it is getting difficult to continue teaching the traditional feminist film class as it’s been taught in the past.

White says that she’s currently retooling her course for its fall 2015 iteration. Earlier versions of the course emphasized women filmmakers and folded together issues of the gaze, intersectionality and sexuality within that rubric. This framework allowed lots of variations, so White could also address global women directors, indie women directors, historical scope, generic range and more. But for the next version, White is addressing a few questions. “First, my course is film and media studies,” she says. “What is my obligation to the ‘and media’ component? I feel I have an obligation to include online media.” This obligation comes in part from her students, who, as a generation, deal more with non-cinematic formats. “However, this work is often in the realm of fan culture,” White explains. “So the questions of ownership are keenly feminist there, but at the same time, they’re gutting all of the things that I care about in terms of an independent, sustainable cultural sphere. So that’s where I’m rethinking the course.”

White, who is on the board of Women Make Movies and has served for many years as part of the editorial collective for the feminist film journal Camera Obscura, takes questions of the material circulation of films, videos and media very seriously. “How are artists sustained by their practice?” she asks, questioning the role colleges and universities can play in supporting independent work at a time when videos are increasingly shared online.

White is also intrigued by the question of how best to address issues of sexuality so often raised by feminist media. “Interestingly, the units on fan vids or feminist remix culture are where students really start to open up and talk about sex, often in a vernacular that I don’t even know,” White says. White’s syllabus includes a week titled “Reclaiming Popular Culture” with several essays by Francesca Coppa on feminist remix.

“Gamergate, flame wars and trigger warnings: students have a new way of structuring their sexual permissions and a new framework of labels and institutional protections,” White says. “Part of my interest in teaching this course is in addressing student amnesia. I want to say, ‘Look at Carolee Schneemann, look at Ulrike Ottinger, look at Shu Lea Cheang! Look at ways of claiming sexuality, of feminist, queer and trans positions that are going to surprise you, and they won’t come with warnings, and they won’t come with any discursive barriers.’”

White is also interested in having students reflect on how different kinds of work circulate. “My classes have always had an emphasis on production, distribution, criticism and other kinds of networks, but seen through specific film texts. For example, I like to come back to Miranda July’s Me and You and Everyone We Know, which to me is a good way to start a conversation about why we fetishize the feature film format, and how you can undermine it. So we discuss the ways that the film relates to July’s oeuvre and all the other work that she does, but also how it allows her to be put on the list of women directors. I use that to open up for students how their knowledge of media can inform ideas of canon construction. With a canon, there are filmmakers, and we should know them, they should be held in common, and we should be able to position them in different contexts. So, when is a work a work? When is it sanctioned?” For White, these are vital questions that change in the context of online media and fan culture, where work is far more ephemeral and transient.

Given her research for Women’s Cinema, World Cinema, White also suggests that feminist film courses might be stronger if they adopted a global perspective. “What a difference it would make if people saw world cinema,” she says. “Feminism has established this very solid terrain, but we’re resting on our laurels in not reaching out to people who are making movies now,” she says. “There is so much out there globally, and it raises different questions. It raises questions about how women are professionalized elsewhere; it raises questions about the impact of the explosion of film schools in the wake of international film festivals. Also, there are lots and lots of women from advertising, commercials and music videos in Asia and the Middle East with strong careers delivering entertainment moving on to make feminist features. That is very cool.”