Meet Me in Montenegro at the Munich Film Festival 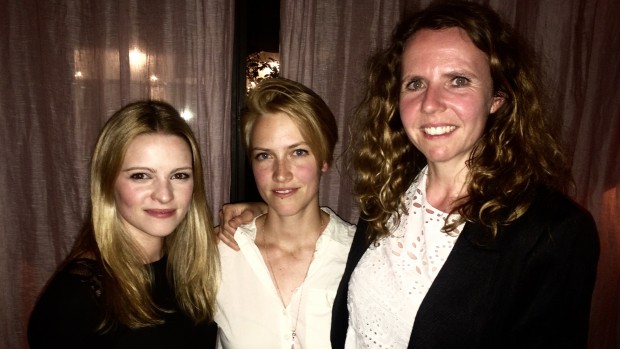 Meet Me in Montenegro is a romantic comedy about two lovers, a Norwegian dancer and an American filmmaker, who meet by chance during a visit to Berlin. The film is based on the real-life romance between co-writers, producers, and editors Linnea Saasen and Alex Holdridge, who both also star in the film as the fictional portrayals of their real-life characters. On the eve of the German premiere in Munich, I sat down with Saasen, her co-producer Ineke Hagedorn, and co-actress Jenny Ulrich. The Orchard has recently released the film in the U.S. and Canada, and it’s also available on digital platforms.

Filmmaker: Do you think your German premiere will feel different from other festival screenings?

Hagedorn: Because the film is English speaking and we aren’t in the German section of the festival, we are under the radar in a sense. The film doesn’t feel totally German even though almost 99% of it takes place in Berlin. But, as Germans, this Munich premiere is a great moment for us.

Saasen: We started the film four years ago, so it definitely feels special to finally show it here.

Ulrich: Before, it was just the film we always talked about. Now, we get to invite our friends to see it after having heard about it for so long.

Filmmaker: Are your collaborators and film communities based in Berlin, where you all live?

Saasen: I feel like I’m just meeting the film community for the first time now.

Hagedorn: My community is mostly the people I went to film school with at Filmakademie Baden – Württemberg in Ludwigsburg, which is one of four, maybe six, film schools in Germany. It’s a supportive group of people, but it’s hard now that we are all competing for the same jobs and the same funding that goes mostly to big productions. This film was financed with private equity, which is not how it usually works in Germany, but it reminded me of the New York spirit, which felt very exciting for me.

Hagedorn: I lived in New York for two years after film school and worked at IFP and an independent production company. The American way of working is something you maybe have to grow up with. There are some people who adjust, but it’s not the way I’d ultimately choose to work or how I’m used to working. Everyone is pouring in with the same dream so it’s exciting because success is so close, but it can also feel frustrating when it’s so close but just out of reach.

Saasen: I love New York – it’s alive and hectic with so much energy. Berlin is different — very transient. It’s great because it’s so open but hard when people move away so often.

Filmmaker: You’ve been living there since meeting your co-creator and real-life partner, Alex Holdridge?

Saasen: Right, the movie is based on our true story. Like the characters in the film, I was a dancer and he a filmmaker, we met one night, and our life plans collapsed at the same time. Writing the movie was never really a discussion. We just started writing it. And then it all happened really fast. We met in June and started shooting in October. I was still so new to Berlin so it was all very exciting — shooting in the amusement park, the buildings…so much to explore!

Saasen: Yes, parts of the amusement park are gone. A lot of what we shot in Berlin is already gone, which makes the film so much more special. At the time, it maybe felt as though we were shooting a cliché Berlin, but Berlin changes so fast, so anything that might have been a cliché as we were shooting, doesn’t feel like that anymore.

Filmmaker: Now that your story is public, how has it changed for you?

Saasen: It’s hard when something is so personal, so close to home. And even though we changed the story a bit, I feel very exposed that our story is out there. It’s as if we are out there to be judged by everyone. Hopefully, our next project won’t be so personal.

Filmmaker: Why did you cast yourselves?

Saasen: At some point while writing, we decided to put ourselves in the roles because it gave us the opportunity to shoot everywhere — Montenegro, Berlin, LA — without having to fly actors back and forth. We could shoot in all these locations because we were already there as the directors. It happened out of necessity really. I hadn’t acted in a movie before, but I had done a little bit of amateur theater and I have a background in dance so I’m used to performing.

Filmmaker: Jenny, how would you describe the acting community in Berlin?

Ulrich: I think our generation has really grown together in a way that previous generations maybe haven’t. The 90’s were wealthy times for German film, but now it’s more up and down. There are more actors but less jobs with satisfying conditions, so I have the feeling that our generation is more kind to one another because we feel some problems can only be solved if we unite. I have a lot of friends who are actors, but I also like to keep my private life free from all this film business. I work at a beach volleyball club every summer where it’s great just to meet people who aren’t connected to film.

Filmmaker: Do you have an interest to work in film besides as an actor?

Ulrich: I want to stick with what I do because I feel comfortable with it and I love it. I could maybe see myself doing something more on the production side, maybe producing.

Hagedorn: We only had two people handling the Berlin production needs so Jenny was basically a production manager on the film. She even brought soup to set!

Ulrich: Well it’s really so important for everyone to get along and feel that sense of harmony on a set.

Saasen: You have to work together with the same people everyday, and even when people are getting along, it’s an inherently stressful environment. I don’t understand how people could be demanding or unfriendly.

Ulrich: There are people who tend to use the attention on set as a platform for their vanity or a way to abuse their power. You can choose to use this attention as a platform to behave poorly or you can dip into it in a positive way. I try to treat people the way I’d like to be treated. I don’t walk onto set telling people what to do or demanding things —

Hagedorn: Everyone knows not to do this, but still, a lot of people are assholes anyway. You are a likable person and you have such a presence on screen, which is a rare balance for an actor I think.

Filmmaker: Ineke, how do you manage stress on set?

Hagedorn: Well, what helps when it’s stressful for me is humor. Funnily enough, I always laugh a lot in the most stressful situations. With this film in particular, I remember a lot of laughter, mostly because Jenny and another actor on set, Rupert Friend, are so funny. And when you are waking up for 4AM shoots, you get a bit hysterical, so I use that to my advantage. Everyone has a lot of anxiety because there is money at stake and so many people need so much. But everyone wants the best result, so it’s my job to make sure that everyone on set, from the actors to the makeup person, has an equal voice.

Ulrich: What is hard about film funding in Germany is that even though it’s officially cultural funding, it feels as if it’s economic funding in the end. Who gets the funding is so often determined by the potential commercial success of the film. Cultural money shouldn’t behave this way.

Saasen: It’s like this in any European country. And, once you get your foot in the system, you are in, while others are repeatedly kept out. And the films that are funded are often so similar — in Norway right now, many films seem to be about middle-aged men who feel like outsiders.

Filmmaker: What will you do differently on the next film?

Hagedorn: I hope to get smarter about where I put my energy and where I let go, which I think is the challenge for every working person.

Saasen: I think that even if you make many movies you will continue to make many mistakes and learn lessons the hard way. I’m glad everything happened the way it did, but next time, a bit more structure would be nice, and of course more security in the funding.