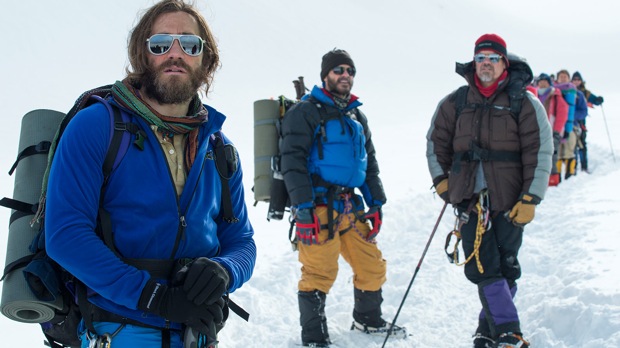 by Giovanni Marchini Camia
in Festivals & Events
on Sep 8, 2015

In its first half, the Competition of the 72nd Venice Film Festival has been a let-down, failing to present a single truly great title. The Orizzonti and Out of Competition selections have generally proved a safer bet, and of course the excellent Venice Classics program, which so far included screenings of restored masterpieces by the likes of Fellini, Melville and Hou Hsiao-hsien, has been a reliable and most welcome morale boost whenever necessary.

Following Birdman and Gravity in the last two years, the festival extended its string of star-studded, big-spectacle openers with Baltasar Kormákur’s Everest, a fictionalization of an infamous 1996 commercial Mount Everest expedition that left several people dead. Unlikely to match its predecessors’ tremendous post-Venice success, Everest is pretty much what you’d expect from its IMAX-friendly poster. The adventure-turned-disaster script is as conventional as they come, while the spectacular Himalayan scenery and an effective use of 3D to convey vertigo (though not much else) make for a thrilling ride, especially in the nerve-wrackingly intense second half, which sees the mountaineers caught in a raging blizzard just after reaching the summit.

Disappointing if not exactly surprising is the scant attention given to the weighty moral and philosophical questions raised by the fact-based story. The ethics of offering such a peril-laden experience in exchange for financial gain ($65,000 a head, multiplied by eight) are glossed over in order to paint an unsullied portrait of the expedition leaders, played by top-billing stars Jason Clarke and Jake Gyllenhaal. And while the baffling hubris involved in voluntarily suffering weeks of elemental torture and risking life and limb to simply reach the top of a very tall mountain is quickly addressed, the most articulate insight offered is, “Because it’s there!” – cue roaring laughter and high fives.

One of the most eagerly anticipated Competition titles was Alexander Sokurov’s Francofonia, which was billed as a companion piece to his prodigious Russian Ark that explores the Louvre instead of the Hermitage Museum. If such a description applies at all, then it’s only on a thematic level, as Francofonia actually spends less time inside the Louvre than in the depths of its maker’s navel. Rather than a 96-minute, continuous travelling shot, Sokurov’s second museum film offers an 87-minute, uninterrupted voice-over monologue. The director shares his rambling Louvre-inspired ruminations on art’s place within history, with particular focus on France’s period of occupation during WWII (funny that he should zero in on one of the more embarrassing chapters in the nation’s history when he only addressed the glory of his own country’s less-than-immaculate past in Russian Ark).

The interest kindled by this discursive exercise and the appeal of its visual realization fluctuate wildly. Some ideas put forward are intriguing, such as the paradoxical notion of war as art’s antithesis as well as symbiont, and recurring footage of two actors impersonating the French civil servant and Nazi officer who jointly rescued France’s artistic patrimony, rendered in the gorgeous bleached-out aesthetic of Sokurov’s narrative features, suggests that a more captivating film might have sprung from this premise. These are offset by clips of archive footage edited together with graphics, images and photographs in a rudimentary presentation — the superimpositions and fades are worthy of the History Channel. The sparse original material shot within the Louvre mostly portrays actors dressed up as Napoleon and Marianne prancing through the museum’s halls, respectively repeating “C’est moi!” and “Liberté, égalité, fraternité!” over and over. The sight of the twosome looking like Raphael’s cherubim as they gaze up at the Mona Lisa in adoring admiration, which serves as Francofonia’s equivalent of a climax, is cloyingly twee.

Luca Guadagnino’s Competition entry A Bigger Splash, his first fictional feature since the vastly overrated I Am Love, proved deeply divisive, with critics hailing it as either a triumph or a travesty and little in between. It’s not surprising that one of Guadagnino’s recent films is a documentary on Bertolucci, as A Bigger Splash feels like a composite of the latter’s worst qualities, as exhibited in Stealing Beauty and The Dreamers. The film aims to probe the crippling passions that torment its four uniformly photogenic and obscenely vacuous protagonists – played by Tilda Swinton, Ralph Fiennes, Matthias Schoenaerts and Dakota Johnson – as they vacation in a stunning villa on an idyllic Sicilian island. It’s certainly pleasing to the eye, and Yorick Le Saux’s lush cinematography imbues every frame with a simmering sensuality that would have been perfect in the service of another script. The present one, however, gives the impression that its author, David Kajganich, has never met an actual human being. Apart from being odious, none of the characters is in any way believable. Their every action is contrived and each sentence uttered is so loaded with suggestion, they more often seem to be addressing the audience than one another.

Then, in the finale, Guadagnino has the gall to turn A Bigger Splash into a comment on the decades-long migrant crisis in the Mediterranean, as if to say: look, here are people with real problems. The manner in which this dimension is integrated is perfunctory to the point of incongruity and the aspired elevation completely undeserved. For a director who has dedicated his last two fictional features to romanticizing the self-absorption of the super-privileged, it’s also glaringly hypocritical.

Differently inappropriate treatment of human tragedy was the fundamental fault of another Competition film: Beasts of No Nation by Cary Joji Fukunaga, who also acted as scriptwriter, producer and DP. [Editor’s note: Beasts of No Nation was adapted by Fukunaga from Uzodinma Iweala’s novel.] By depicting the horrors of war through the eyes of a child soldier, Beasts of No Nation aspires to be the African civil war Come and See. The impressive 14-year-old lead, first-timer Abraham Attah, would have been up to the task, but for all its visual prowess and visceral power, both of which are substantial, the film smacks of appropriation. Like in Kim Nguyen’s very similar – and similarly problematic – War Witch, the conflict in Beasts of No Nation is fictional and the national setting remains unspecified. Beyond the ostensibly laudable purpose of endowing the story with universality, such forsaking of specificity also lifts significant responsibility from the filmmaker, who’s rendered virtually unimpeachable by being on the right side of an abstract yet strictly unambiguous moral issue. Taking ample advantage of this leeway, Fukunaga’s direction consistently employs manipulative tactics that range from cheap to reprehensible.

Take the pivotal scene in which the Commander – Idris Elba, trying his best at a Kurtz approximation – forces Agu (Attah) to commit his first murder by ordering him to execute an unarmed prisoner with a machete. Fukunaga first ratchets up tension by rapidly intercutting between direct facial close-ups of the petrified Agu, the barking Commander and the prisoner desperately pleading for his life. Then, after he’s cleaved the man’s forehead, Agu is joined by fellow child soldier Strika and the two hack away at the man’s corpse as if possessed. The horrifying, seemingly interminable frenzy is captured from a handful of different camera positions, switching to slow-motion halfway through and culminating with blood spraying all over the lens. By resorting to such extreme overemphasis, does Fukunaga consider the viewer too stupid to recognize blatant atrocity, or is he abusing his effective carte blanche to indulge in a revolting stylization of violence?

With Tobias Lindholm’s outstanding A War, the festival’s Orizzonti sidebar presented a film that ventured a more nuanced representation of war. In its first half, A War depicts the day-to-day of a Danish military unit stationed in the Afghani desert. Working on a modest scale and benefiting from the collaboration of actual soldiers (a large part of the cast served in Afghanistan and acted as consultants to the production), Lindholm skillfully evokes the same edgy paranoia that was an essential component of The Hurt Locker. Fighting an invisible enemy, here both literally and figuratively, and with every civilian a potential threat, the soldiers are subject to acute and constant psychological oppression. When the unit is caught in an ambush, the commanding officer orders an air strike that leaves eleven civilians dead, including eight children. As the decision to call an air strike breached the Rules of Engagement, the officer is put on trial and A War relocates to Denmark, turning into a courtroom drama for the remainder of its running time.

Lindholm’s unfalteringly impartial handling of the central ethical dilemma is remarkable. Although the soldiers are portrayed in a favorable light and the officer’s action makes perfect sense, no doubt is ever cast over the vital legitimacy of the Rules of Engagement. Tightly scripted and resolutely realistic, A War is one of those rare films capable of inspiring genuine reflection on the vast complexities of war and its manifold victims, not least by recognizing the purely detrimental role of polemics in such an endeavor.

Another Orizzonti highlight was Neon Bull, a beautiful and unique road movie by Gabriel Mascaro. Neon Bull tags along with an itinerant “family” of cowhands as they travel through the hinterland of northeastern Brazil, supplying bulls for vaquejadas, a rodeo variant in which two horseback riders wrestle a racing bull to the ground. Largely eschewing narrative and maintaining a languid pace similar to that of his previous feature August Winds, Mascaro quietly yet piercingly observes the power dynamics between his characters. Each harbors individual aspirations – the protagonist, for example, dreams of being a fashion designer – and while the impossibility of their fulfillment is suggested, the film doesn’t overstate the social forces at hand nor wallow in tragedy, preferring to celebrate the characters’ tenacity by offering them the possibility of private transcendence.

The exactingly precise cinematography by Diego García, who also shot Apichatpong Weerasethakul’s Cemetery of Splendour, is breathtaking, particularly in the outdoor shots that arrange persons and bulls in the sun-drenched, arid landscapes to create stunning bucolic tableaux. Though in a few instances Mascaro lets his careful calibration of mood and tone slip in favor of unfortunate provocation, as in the excessive and overlong sexual climax, Neon Bull is by and large a striking achievement in evocative understatement.

At every press screening, the film’s closing shot is followed by applause and/or boos (and, not infrequently, obscenities shouted in Italian). Thus far, the only film that was also applauded during its opening credits was Frederick Wiseman’s Out of Competition entry In Jackson Heights – deservedly, as it transpired. Using the direct documentary mode he’s been faithful to for the last 48 years, Wiseman patiently constructs an extraordinarily rich mosaic portrait of titular Queens neighborhood. Longer, speech-filled scenes – round-table discussions at a gay seniors’ association; a lesson at a taxi school for South Asian immigrants; transsexuals sharing their experiences of intolerance at a support group  – alternate with shorter sequences that wordlessly capture the rhythms and atmosphere of specific places: men at work in a halal slaughter-house; a concert held in a laundromat; Indian women running a cosmetics saloon.

Though the breadth of Wiseman’s subjects is staggering, the looming threat of gentrification is a topic that keeps reappearing throughout, emerging as the overarching theme and injecting the film with an activist urgency. In Jackson Heights does feature some repetition, scattered instances of longueur, and a few arguably superfluous scenes like the one set in a tattoo parlor-cum-headshop of the type found in any neighborhood or one depicting the pedicure of off-puttingly calloused feet. These could have been cut to shave off some of the potentially forbidding 190-minute running time. Nevertheless, the overall cumulative effect is astounding, making it impossible not to fall in love with this beautifully vibrant neighborhood that epitomizes the concept of a melting pot. Here’s to hoping In Jackson Heights never becomes an ethnographic document of an extinct community.