“I Am Completely Oblivious to Risk When I Film”: Five Questions for The Other Side Director Roberto Minervini 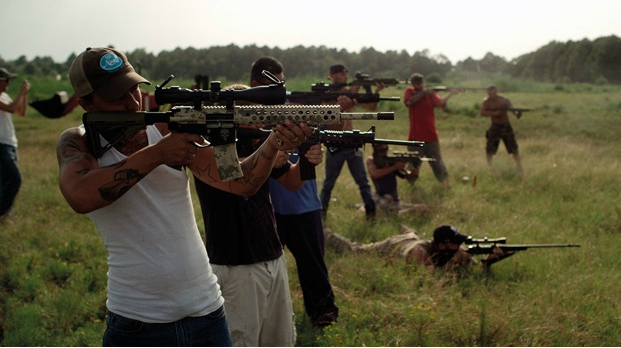 by Vadim Rizov
in Directors, Festivals & Events, Interviews
on Sep 10, 2015

Roberto Minervini, Stop the Pounding Heart, The Other Side, Toronto International Film Festival 2015

Italian-born, American-based Roberto Minervini’s fourth feature The Other Side grew out of his previous film, 2013’s Stop the Pounding Heart. That hybrid documentary followed the (fictionalized) romance between Colby Trichell, a teen rodeo rider, and Sara Carlson, a young girl in a devoutly Christian family. Moving from Texas to West Monroe, Louisiana, Minervini’s new documentary starts by following Lisa, the sister of Colby’s dad Todd, and her boyfriend Mark. This is a dark story, one of drug abuse and disenfranchisement, and the second half plunges further into the backwoods, riding along with a virulently anti-Obama militia as they train and prepare to confront their perceived enemies. The film premiered at Cannes and is making its North American premiere at TIFF. Beforehand, Minervini sent along his recorded answers to email questions about his new film’s making.

Filmmaker: When I interviewed you last summer, you mentioned that your own upbringing was difficult in some ways, since you came from “a little town full of drugs and alcohol and uneducated people, a lot of violence and abuse.” You found echoes of the masculine culture you were raised in while filming the Trichells. How did your past resonate while filming The Other Side?

Minervini: Drugs, alcohol and violence are some of the most effective primordial ways of self-defense, of protecting oneself. Of course, they all stem from fear. In my past, I lived in fear and developed my own defense mechanisms. It is inevitable at this point for me, as a filmmaker, to go and look obsessively for my past in other realities. There is something very cathartic about it, but there is also something very co-dependent about it. That’s what makes these films very personal. The Other Side is no exception to that. You asked me this question; I think you already imagined this would be my answer.

The drugs and alcohol that we see — mostly in the first part, in the story of Mark and Lisa — and the violence that we see in the second part with the militia, they trigger in me an extreme and very profound sense of empathy and pain. The fact that people have to take action, no matter how destructive or self-destructive those actions can be, is such a desperate act that it pains me. In this case, I needed this discourse to step up from the individual human level to the sociopolitical one. I’ve already approached the topics of pain and fear, and I needed to dig into the sociopolitical causes of it. I think my intentions are very clear with The Other Side, more than in Low Tide or Stop the Pounding Heart. This time, it is the angry me that takes over while filming, who wants to look for who’s responsible for this self-destructive, violent social behavior. It was time for me as an American filmmaker, living and working in America, to look for the responsibility at an institutional level. The fact that people need to find a shield in violence and drugs, behind weapons — no matter if they are syringes, AR-15s or assault rifles — the fact that people feel the need to protect themselves in America is something that’s not only anachronistic but it’s brutal. So for me, the brutality of the film is actually the other side of what we don’t see of institutionalized brutality that is happening in areas and states that I know very well.

Filmmaker: This is the first film you’ve made with co-producers and financiers, meaning you didn’t have to spend your own money. Did this affect the way you work significantly and free you up to focus more on filming, or was the process essentially the same?

Minervini: I wouldn’t say my way of working changed; I am very, very protective of the way I work, and was very selective in choosing the people who came on board for this venture. None of the producers and investors came during the shoot. The shoot is something that concerns me, my very few collaborators (who haven’t changed), and the characters involved. We handle that very privately. My producers and investors totally understood that. They wanted my way of working to be intact and unchanged. So they were allies, and I was happy about it.

Their positive impact came, of course, in the post-production phase. Creatively, they supported me. They saw my strengths and weaknesses, when I had a crisis and thought I wouldn’t be able to finish this project. They embraced success and failure with me, so I felt supported and nurtured. The fact that I didn’t spend my own money — well, it’s hard to say. I think after the fact, I can say, yes, it did affect me. I did feel some freedom. I’d already taken a lot of personal risks and felt very exposed while making this film, and I don’t think I need financial exposure to be added to my creative and personal exposure.

However, my approach and focus while filming has nothing to do with financial exposure. When I film, I’m gambling it all. There is something very positive that happens to me when I film: the fear that I have when I embrace these projects makes me react with fearlessness. I just go head-first and don’t think about the risks. I think this reckless way of filmmaking shows in the film itself. So when I filmed, the focus was the same, but after the fact, when I realized I didn’t have the financial burden, that helped. And frankly, I don’t think I could have gone much further spending my money. I think my career would have been over by now.

Filmmaker: The subjects of this film are the family of Todd Trichell, who you’ve said he’s estranged from. How did you get in touch with them initially? Did Todd come with you or provide any kind of introduction?

Minervini: Lisa is Todd Trichell’s sister. Todd is the only one of the Trichell family that was able to escape that doomed environment, but he didn’t do it intentionally. He escaped because he was hunted by the police when he was a drug dealer when he was a teemager. So he escaped, laid low for a few years in northern Texas, until he reinvented himself as a blue-collar worker in the oil and gas industry in south Texas. He made a career out of it and now he’s a very successful supervisor in the gas industry.

Todd isn’t estranged, he’s just distant from it all. He put me in touch with Lisa. But that wouldn’t have enough for me to gain the trust of Lisa, Mark and the whole family. Linda Trichell, Todd’s wife, called me and became my production manager. She was always with me; we traveled and worked together. Linda is continuing to work with me right now on many projects. She was also our bodyguard. She’s a very skilled shooter, and she always carried a loaded gun in her purse. She had to take it out a couple of times. She was our access point, but she was also our safety net in a way.

Some of the people in the militia are related to the people in the first part. I won’t go any deeper, because there is a certain anonymity that has to be granted there, but there are family ties between the two worlds.

Filmmaker: For Stop the Pounding Heart, you sent the Carlson family to Q&As in your place. It’s hard to imagine the same thing happening with this film, but are you planning to ask the Trichells to do the same? Have you raised the possibility with them?

Minervini: Mark and Lisa and their families can’t travel on my behalf this time. That happened mostly for legal reasons. Mark, Lisa and all the other characters in the film couldn’t come to Cannes; they couldn’t get a passport, because most of them have a warrant for their interest. From the second part, one of the militia guys came to Cannes, and was very willing and open to talk about his views. He entertained a lot of people in Cannes.

I wouldn’t have any problems sending people to do Q&As on my behalf. It’s their movie as much as it is mine. It would be necessary to hear firsthand their experience being part of the film and also their views and lifestyle. My films are a depiction of their lives; the language I use is my language. Here we get into the neverending debate that started for me with Stop the Pounding Heart, about the fine line between documentary and fiction, but The Other Side is a testament to their lives. There is no screenplay, there are no fake characters. People aren’t playing themselves, they are themselves. Re-enactment or direction I still consider a necessary tool to successfully to complete a project with such a high degree of difficulty.

Filmmaker: In our conversation last year, you mentioned that the shoot was difficult, and it certainly seems like the threat of physical danger was greater on this film than in your previous ones. What were some of the more unnerving moments?

Minervini: The degree of physical danger was certainly greater. Even for the first part of the film, some people let us know they were armed. We all took a risk. I knew I was taking a risk, mostly concerning the physical danger, and they took a risk because they were exposing themselves, including concerning the legal aspects. Doing work like this, which says a lot about their stories and also my own, always implies taking a risk. In that sense, the amount of risk hasn’t changed from Stop the Pounding Heart.

But you asked about the physical danger. Of course there’s been physical danger. There’s been instances where we’ve been locked in a trailer from 9 PM to 5 AM, filming scenes — I mention in particular the scene of Lisa, you see someone shooting drugs into her vein with Mark looking. It was a very tense situation, with the fear of police showing up and people not wanting their faces to be filmed. That’s why we only see arms. People ready to do something realize the camera might tilt up and see their faces. So it was a very tense night shoot. That’s the moment when we all felt something dangerous or harmful might have happened. In the second part, I didn’t feel physical danger, except from the dangerous accidents of going through the forest. We filmed a group of people moving with the militia guys through training and shooting, and except for the stray bullet danger, for me there was no real danger.

I am known in these communities, and I built my reputation, which is very well-documented now, of someone who is there to depict such communities with empathy, because I care about them, and with a point of view that is as impartial as possible. So I didn’t feel in danger, but there was something else. I am completely obvious to risk when I film. There is something very pathetically heroic — I’m very attracted to martyrdom, to this romanticized idea of dying for art. That’s what I wanted to be a war photojournalist. In a way, sometimes I feel like it would be perhaps the best way to go: to die during a film shoot, to die for a film. Perhaps if that happened, I’d be more credible as a filmmaker who’s willing to risk it all for film. But that’s very romanticized; I’m very happy to be here, answering your questions, alive and well.

The Other Side makes its North American premiere at TIFF. Screening and ticket info here.