Shooting on Film? At IFP Screen Forward, Debating the Merits and Pitfalls in a Digital Age 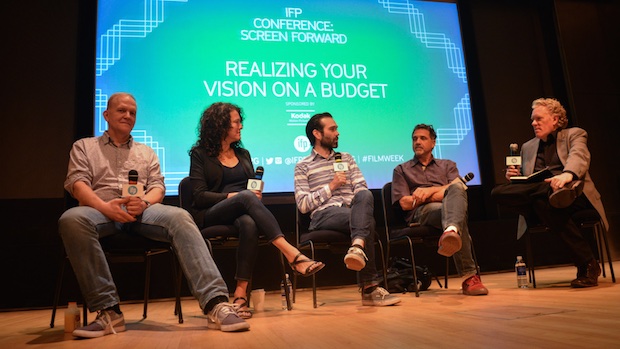 In this era of digital projectors, ALEXA cameras and minimal, DSLR-enabled budgets, the art of loading rolls of film into a magazine and shooting with a 16 or 35mm lens is fast becoming a fading practice. And yet, there are those determined storytellers who dare to pull it off. But is shooting on film on a low budget even possible these days? A Wednesday morning panel at the IFP’s Screen Forward conference comprised of cinematographer Frank DeMarco (All is Lost, Margin Call), producer Adam Piotrowicz (Listen Up Phillip, Queen of Earth). cinematographer/producer/director/editor Ferne Pearlstein (Imelda) and director/producer Ari Taub (79 Parts, The Fallen), and moderated by Filmmaker Magazine’s own Scott Macaulay, offered its panelists’ respective experiences of taking on the challenge. Listening to their perspectives, I realized that while it can be increasingly difficult to shoot on film in a digital age, the aesthetic rewards make it worth it for the shrinking pool of filmmakers who still choose to do so.

The decision to shoot on film can be driven by a multitude of reasons. For DeMarco, going the Super 16mm route for the currently-in-preproduction How to Talk to Girls at Parties is the result of director John Cameron Mitchell’s desire to remain true to the look and feel of the film’s 1977 punk rock period setting, and the decision is enabled by an affordable deal on stock with Kodak. DeMarco, who said that the decision to shoot digital over film is often made by producers against the wishes of D.P.s and directors, pointed out that film is a much more forgiving and flattering format for actors. Indeed, he said he’s been on films where the lead actress was behind the decision to shoot on film.

Piotrowicz collaborates consistently with director Alex Ross Perry, who shoots only on film. Thus, lensing the recently released Queen of Earth on Super 16mm was never even a question, despite a budget one-tenth the size of their previous film, Listen Up Philip. “We didn’t want to explore any other option, so it was about backing ourselves into a corner and building our budget from there,” he explained, a move that necessitated scavenging for leftover film from other productions as well as, again, discounts from Kodak. In Pearlstein’s case, shooting Super 16mm on films like her current The Last Laugh is enabled by the fact that she’s her own D.P. and she owns her own camera. For Taub, the desire to shoot solely on film stems from a childhood passion when he gravitated towards the heady scent of film canisters. As he described it, he is literally addicted to film.

Yet, the panelists all acknowledged, the decision to shoot on film doesn’t come without roadblocks. Support systems for shooting on film, as Pearlstein and Taub both bemoaned, are beginning to disintegrate, with lack of training in film schools leaving newer, younger camera crew less prepared to work with the appropriate equipment. Those who are belong to a modest pool whose availability is unpredictable and many times incongruent with a low-budget film’s schedule, as Pearlstein described while recounting the making of her current documentary, The Last Laugh. When comedian Sarah Silverman agreed on short notice to be interviewed, Pearlstein had to scramble to find an A.C. immediately available and who actually remembered how to handle celluloid.

The struggle doesn’t end with principal photography. A further hindrance is the dwindling number of labs to which film can be sent for processing, evidenced by the mere handful of locations — FotoKem in L.A.; Colorlab in Rockville, MD — the panelists named as their preferred options. Several of the panelists remained saddened by the closure of New York Film Lab last December. Macaulay pointed out one bright spot: the emergence of mobile film labs like the Alpha1, which brings film processing directly to set or to underserved locations.

But despite all the reasons to opt for digital, there remain undeniable benefits to shooting on film, the greatest of which are, of course, aesthetic. DeMarco was particularly emphatic about the comparatively layered look and texture of film as being preferable to digital. It allows for, he said, gradients of color and focus as opposed to digital’s narrower range. While digital can simulate the look and graininess, he maintained that at the end of the day, it isn’t the same as what he called the “chemical mélange” that is film; that is, its kaleidoscopic ability to emulate nature and produce more than simply a static image, thus affecting audience’s perception of what they see.

There remain a few allies in the mission to shoot affordably on film, chief among them Kodak, the panel’s sponsor. New York post-production facility Metropolis Post got a shout-out from Piotrowicz, who dubbed it his longtime go-to house for scanning, color-correcting, dustbusting, and deliverables. Speaking of deliverables, Taub mentioned the ephemerality of tape and digital formats, pointing out that properly vaulted celluloid negatives outlast the various archive mediums of the last two decades.

After 45 minutes of listening to pros and cons, personal anecdotes and future projections, I returned to the question of whether the results of shooting on film validate the challenges. From what I gleaned, the answer can vary depending on the filmmaker, but it comes down to one’s commitment level. In a climate where even films without financial constraints opt for the convenience and cost of digital over film lenses, to shoot on film when budgets are tight is straining an already-arduous process. One must rely on drive, resourcefulness, and an equally passionate team in order to take the leap. If the dedication to overcoming the odds for a 16mm experience is there to begin with, chances are high that the decision won’t be regretted, even when it means swimming against a current that seems to be getting ever stronger.