Stories about Others: Inside (and Outside) Crimson Peak 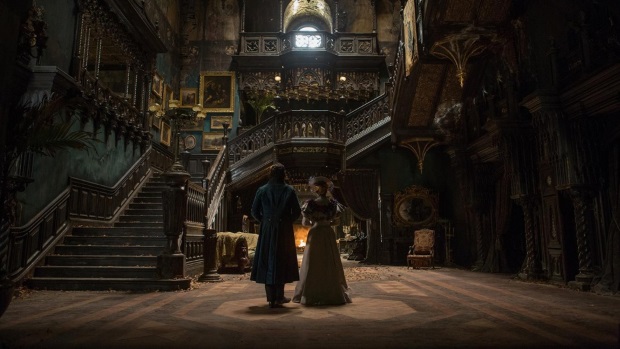 The man in front of me at the ticket booth didn’t understand the new system at the theater. It was news to him that he had to pick a seat. He had never heard of such a thing, and an alcoholic beverage being an option just about blew his gasket. I was going to be missing some trailers, there was no doubt about that. This guy wanted a full verbal tour of all the recent developments at his local Cineplex. And he wasn’t going anywhere till he was satisfied and clear. I started saying underneath my breath, louder and louder things like, “Wow,” “Jesus Christ,” “holy shit,” “for real?” and “is this a fucking joke?” It was the fucking joke that got him to turn around. “I’m sorry,” he said, “I’ll just be a minute.”

“Yeah, but, you’ve been a minute.” I said. He stared at me for a moment, then went back into his new obsession about the reclining seats. How, he wanted to know, did it all work.

I didn’t pay for my ticket, I admit. It was a midnight showing, and the ushers were all tired and I just wandered over to the popcorn acting like I had a ticket, and no one stopped me. It was an immoral move and I guess you could call it stealing, but what choice did I have? That guy was still investigating at the ticket booth. Anyways, I bought a large overpriced bottle of Dasani water, out of guilt. Dasani water tastes worse than any tap water. I don’t know where they find Dasani water. Perhaps they make it. It’s as if they bottled the tap water — not good New York tap water, more like California tap water — and then they poured dry chalk powder into the California tap. Then they shake it.

The feature presentation comes on and you immediately wish it was in 3D. And that your Dasani was Cherry Coke. You mildly enjoyed this director’s comic book movies, those Hellboy movies. And that’s all you’re looking for tonight — to be mildly entertained. But it becomes clear that the director, on this one, he’s taking himself a little more seriously. So the movie doesn’t exactly move. And you start to wonder if you might fall asleep. Midnight shows are not as easy to do as they were when you were a kid. You might just be that guy who comes to the late movie and ruins the movie for everyone by snoring really loudly on and off throughout the whole show.

You stay awake. The lavishness of the sets, the ornateness of the costumes, it’s all just barely compelling enough that you stay awake. You don’t give a shit about Victorian jewelry or gothic tethers, but it’s nice to see a healthy budget spent on something other than guns and explosions and superhero FX.

The plot flies over your head, as plots often do with you. You watch Mia Wasikowska crying over her father’s corpse and think of how some people, even when they’re young, it’s hard not to just see them as an old person. Mia Waseewasseeelowkaski, every time you look at her, you see her at 85 years old. And it takes away none of her charm. In fact, it only increases her charm.

Jessica Chastain seems to always be aware that she’s great looking, and watching herself. Is that why it feels like she’s doing stuff for the camera? Performing for the camera? Posing? Her acting is meticulous, laser-like… But you can never really feel her. As if she is watching herself too much for anyone else to have space to watch her. And there’s Tom Hiddleston. He played a vampire in that Jarmusch movie, seems he’s playing a vampire in this one too. He and Chastain talk in closeups, on the huge screen, and you think of Denis Johnson’s description of a drive-in movie: “Famous movie stars rode bicycles beside a river, laughing out of their gigantic, lovely mouths.” This movie, you think, is a bunch of gigantic, lovely mouths.

A guy gets his head smashed into a sink, and it’s gruesome enough that you turn from the screen. You’re sitting in the front row of the theater, right up there, and as you turn, you see the dozen people in the theater watching the violence on screen blankly, while eating popcorn. You turn back, thinking maybe it’s not that violent, only to catch a last glimpse of a skull caved in on itself, pouring blood. You close your eyes.

The reclining seat. Do people want to go to the movies and feel like they’re in their living room? Well, the guy in your row clearly does. He’s brought in two hamburgers and is wolfing them down while making a big racket with the burger wrapping and he’s got his feet up and he’s laying back and it’s actually quite something. Normally someone crumpling their hamburger wrapper for an entire minute during a quiet funeral scene would get a “shhhhh” from me. But this movie wasn’t making me feel all that protective, and the guy, this young guy with the burgers, he really was something. He even had his shoes off.

Mia and Chastain and ol’ Tom Hiddleston all end up going to this castle on a hill type place called Crimson Peak. It’s a beautiful set, with dead leaves on the stairs, and red clay bubbling through the floor. You get engrossed in the movie maybe for the first time. The judgements that you have about the actors and the director, they start to melt away a little. Maybe what you’re watching is good, maybe what you’re watching is bad, but you’re no longer watching it like that. It’s not your concern, whether it’s good or bad. Either it’s the lateness of the evening, or the tiredness of your body, or maybe the power of the filmmakers, but finally you’re just sitting in the theater and absorbing the movie. And it goes like that for the next 45 minutes or so and then the movie is over. And you get up and leave.

Outside the movie theater, you walk to your rental car, in the crisp fall night. You sit down in the driver’s seat. But before you turn the key, you stare out at the empty parking lot in front of you. You notice you’re still in the movie. Or the movie is in you. At any rate, the empty parking lot, in Mountain View California, feels and, even somehow looks, like the movie Crimson Peak. It’s all polished and slick and gauche and gleaming. The trees glisten. The cement sparkles. It’s eerily quiet and halcyon.

A friend of yours has texted you, asked you how the movie was. But you don’t have any answer. You don’t have a review. You don’t know how it was, and you’re still in it. And you don’t really know what movies are or how they work.

All those stories we have about others. That actor sucks. That director is okay. So and so is an asshole. So and so is amazing. She’s crazy. He’s nice. All those stories… And none of them real. Sitting in the empty parking lot, outside Crimson Peak, inside Crimson Peak. That shitty great movie made by that shitty great director. Who knows, I may just come back again.