DOC NYC: Lessons and Takeaways from a Week of Masterclasses 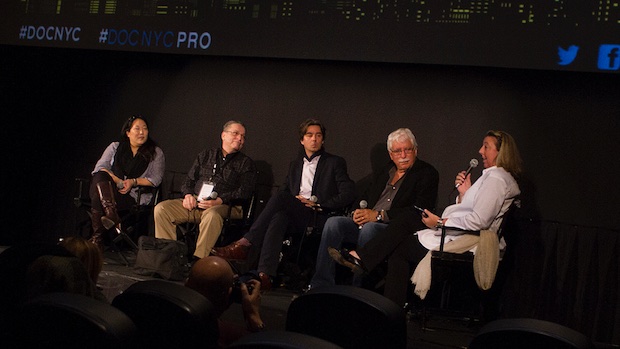 An added feature of the 2015 DOC NYC festival was the DOC NYC PRO Conference, which included a weekend of masterclasses dedicated to the work process in cinematography, animation, editing, and building your film’s sound with the composer. Over 20 professionals touched upon the nuts and bolts of each craft while dialing into the importance of building the relationship with their director as a key element in serving the story. Below are some of the highlights the professionals shared with the audience.

Use Your Camera with Intention.
Mira Chang of Half The Sky said she always has a checklist of what she needs to shoot before going on location: “I need to get a wide shot to set up the scene, I need to get enough cutaways for the editor, and then the rest is a type of dance; when is the right time to move, and when do I shoot the reaction shots.”

“In docs there is a script but you don’t know it yet,” said Axel Baumann (Mission Blue). “So for me it’s the magic of seeing ‘the moment’; it may not be a sentence uttered but you capture an emotion in the character’s face that becomes the scene.” He pointed out that this is the beauty of collaborating with your director and discussing story ideas. You can then be present in the scene and, knowing your character and story, can find those moments.

“It’s what I call ‘the articulate image,'” said Tom Hurwitz (Tiger Tiger). “Our job is to tell the story in the most clear and effective way possible, and we mention it in our classrooms at The School of Visual Arts (SVA) all the time.”

“You try to plan as much as possible, but there is always the unexpected,” said Chang. She went on to describe her experience of going on a location scout while the DP was following some distance behind them with their A-list equipment. Chang and her driver came upon a woman in labor, suffering from preeclampsia, and rushed her to the hospital as the rest of the crew tried to catch up to them. “I was holding an IV at some point while I was shooting. The ability to be nimble enough to capture that story was amazing…it was so touching to be there in the moment.”

Hurwitz expanded on this story to say, “Content is king; you may need to give up quality of image — you do it immediately, though reluctantly — to follow the heart of the story.”

Baumann added, “The vulnerability of life is overwhelming, so to have people trust you to tell their story…I’m so grateful; to be entrusted to tell that story is magical.”

Animation Should Support, not Overwhelm the Film

Often the director will give an animator their film with black holes and say “put something here,” so the task at hand becomes about building imagery that’s more than just eye-candy. First and foremost, the imagery needs to be story-driven.

Said Allison Brownmoore (The Sunshine Makers), “My first thought as an animator is to leave my own personal aesthetics at the door and look at the film. What does it need?”

Ryan Wehner (I Am Sun Mu) described this delicate balance of creating graphics in his film. Artist Sun Mu had shown the filmmakers a sketchbook of drawings he made during his multiple escapes from North Korea, and they wanted to make it part of the story. “I wanted to find a way to animate it, but I didn’t want to be the one drawing it, so we had Sun Mu create new artwork,” Wehner said. “I went with him to Korea for a week, and I photographed him sketching those scenes as he described them in a stop-motion technique which I could then use in the film.”

Molly Schwartz (Watchers of the Sky) said, “The more clear you are with what the animation is communicating, as opposed to using footage that has been shot, the better; I always say to the director, ‘Let’s use nouns and verbs, not just adjectives.’”

All of the panelists referred to the variety of elements they’ve received from filmmakers to help them build the animations. Be it an extra film clip, photo references, VO, animatics, or laying down a piece of music to set the tone, more information from the director is key. Also, animation is super labor-intensive work and you don’t want to spend time and resources that won’t get used in film. So, working with an animator can be more about finding a minimal effect an editor can use in their exploration of the story.

Editing is Cutting to the Truth
The moderator, Jeanne Jordan (Troublesome Creek), began the panel with a discussion of the role played by the opening scene in a documentary film. It can be the trickiest element of the film and sometimes the last thing you find. Also, the opening is vital for understanding the language of the film and sets the tone for your audience’s journey. Then the panelists screened their opening scenes — once from an early stage of the edit, then the final version.

Fiona Otway (Hell and Back Again) brought an early version of the open from her current edit on Brick. She and the two co-directors were invited to the 2015 Sundance Story and Edit Lab, and they used it as a way to crack the nut that was their film. “Editing is building a relationship with the director, and for so long it was just the three of us. Then you put the story out in raw form and you open yourself to critique from insightful people. It was overwhelming, but we talked about what we agreed with or didn’t and then leaned on each other to find what we could accomplish with the film.”

Karen K.H. Sim (Back on Board: Greg Louganis) discussed her process of tweaking the early version and crafting a more nuanced open after finishing the rest of the film: “We liked the juxtaposition of present and past along with the conflict of coming out for him, but it was a constant balancing act of how much to tell and what to share if people didn’t know him.” She revealed that it was a long process of scaling back more and more information until they got to this final version of the open. “And by doing so,” Sim continues, “it gives the audience the space to appreciate the beautiful slow-motion diving shot that is used for the title of the film.”

Jordan then talked about the experience of sharing these elements, and the film in its entirety, with the characters in the film. “Sometimes that is the most nerve-wracking experience of working with character-driven films. The question becomes, when do you reveal the film to your characters…and how?”

Otway said, “I’ve worked on a lot of intimate films where the director created a strong relationship with the characters but in edit room it’s a constant question for ourselves: ‘Are we portraying them honestly?’” Sim added, “There are different kinds of truth, emotional and factual, and the process of editing is heightening emotions in the film. It’s tricky, but we have to feel like we’ve done the research and have done due diligence to the story.”

Building the Sound of Your Film
Todd Griffin (The Overnighters) elaborated on the collaborations he’s had working on various films as a composer. “It’s like being a sculptor chipping away at a stone; we are finding the sound the director wants and learning the little details that move them.”

Danny Bensi (The Wolfpack) showed us a clip from the open of that film in which we meet the boys for first time as they describe their life, but more importantly, their father. “We weren’t allowed to comment too strongly with the music so we wouldn’t overshadow the story.” His partner in composing the music, Saunder Jurriaans, expanded on that idea. “It was more for us to describe in the tone of the music what isn’t said in the scenes.”

Griffin then described his experience working with Bernado Ruiz (Kingdom of Shadows) who sent him a CD of music that he liked for the film. “He had a very [specific] sonic palette he wanted; it was ambient, not conventionally designed. I didn’t think it was going to work, but he then came to talk about his point of view and the journey began.” Ruiz added, “You can see how exciting this process can be; the music was a third or fourth character in film. For me it was new to have such a fluid conversation throughout the building of the film.”

A member in the audience asked Bensi and Jurriaans about their recommendation for working with musicians as opposed to a composer, since they both were members of a band before picking up the composer hat. “We’ve had several directors come to us after hiring musicians,” Jurriaans answered. “Composing requires more organization as you’re mixing around tracks and instruments, then building an assemblage of the whole sound. Being in a band is totally different skill set and we built those skills early by getting involved in the mixing of our own band’s music.” Griffin summed up the discussion by saying, “Even composers need to spend some time throwing pasta at the wall to find the musical voice for the story.”

Cheree Dillon is a film editor and a member of The D-Word (where you can read the complete transcript of the DOC NYC panels). She has over ten years cutting award-winning feature docs for PBS and theatrical release, along with non-fiction programming broadcast on NBC Sports, Discovery Science, The Weather Channel, NBC and TSR (Swiss French-Language TV). You can follow her work at www.chereedillon.com and on Twitter @ChereeNews.