“As Far as I’m Concerned, We Are Making the Movie Version”: Sam Esmail on Mr. Robot 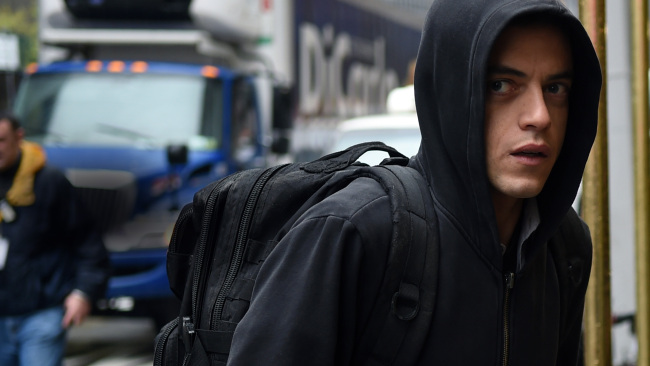 It remains unclear at what point this century cyberpunk — a science-fiction subgenre that emerged largely from the pens of William Gibson and Philip K. Dick — leapt from the realm of speculative to historical fiction; everywhere one looks, it seems that moment has arrived. Many (if not most) westerners live connected to a cyberpunk meta-narrative of their own making these days. We can all be certain, in the era of Edward Snowden, that our digital lives are being recorded. A dystopian view of computing and information technology’s potential, along with a skeptical eye toward vision of “technological as social progress” that corporate propagandists hurl at us in television marketing campaigns, has always been at the heart of the cyberunk genre. So it is with Mr. Robot, NBC Universal’s landmark episodic and an inaugural nominee for the heretofore feature-motion-picture-focused Gothams’ Breakthrough Series Award.

As tapped into the zeitgeist of our paranoiac times as anything on cable, Mr. Robot‘s earliest episodes find Elliot (Rami Malek), a brilliant, socially awkward hacker, leveraging his hacking skills to confront child pornographers while bemoaning, in a constant, sardonic voiceover, the corrupt system of global finance and corporate skulldrudgery. He works for a software firm that protects networks for, wait for it… “Evil Corp.” That their logo recalls Enron’s shouldn’t come as a surprise. Elliot is soon contacted by Mr. Robot (Christian Slater),  an anarchic hacker who, a la Tyler Durden of Fight Club (a film the show was obviously influenced by), wants to bring down the western system of credit and debt, consumerism and greed. The title character and his small team of cyber bandits try to enlist Elliot’s help, but as the season unfolds, it becomes clear that Elliot might not be the most stable of personas, nor the most reliable of narrators.

The pilot for Mr. Robot premiered at the SXSW Film Festival before its much-bandied-about season one run on USA Network. Filmmaker caught up with show runner Sam Esmail at this year’s Zurich Film Festival to talk about the show’s origins, its impact and where he plans to take it next. 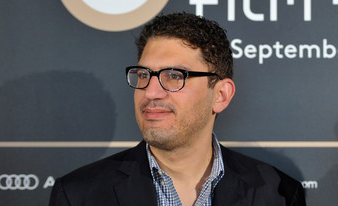 Filmmaker: You gave an interview to The New Yorker where you talked about how this show grew out of watching the Arab Spring, in particular the way in which young people and young activists use technology to ostensibly change their government and win some freedoms that they didn’t have. Can you elaborate on that a little bit and how the germ of this show leads back to then and how it grew into what it is?

Esmail: I think specifically I was thinking about the character of Elliot. I always had pictured him as a guy with a lot of anger and a lot of that kind of angst from youth that you have against authority. I was wondering how to characterize that or humanize that in a way that wasn’t going to feel overbearing or too negative. I actually don’t think anger necessarily has to be a negative emotion. In the case of my cousins — I’m Egyptian and that’s the reason why I went to Egypt right after the Arab Spring. A lot of my cousins were angry at the government, but they channeled that for this really positive change. There was something I found profoundly beautiful about that, and that sort of clicked for me — that I have to make that part of Elliot’s makeup.

Filmmaker: What other things were you drawing upon when creating the aesthetic and tone of this show? I couldn’t help but think of David Fincher’s Fight Club in the way in which it takes place in a similar sterile corporate environment, one that the protagonist satirizes in a running voiceover and eventually attempts to violently overthrow.

Esmail: I’m very much a film buff. I’ve watched a million movies and TV shows and I’ve probably borrowed from every single one of them. A lot of people say when they come up with a movie or come up with a story they use their real life, their family members or an article they read in the paper. That’s what’s gives them inspiration. For me it was the movies and shows. I would say specifically Pulp Fiction in terms of the way Tarantino uses music and A Clockwork Orange in terms of our aesthetic, our composition, our lighting, our sort of off-kilter angles. I borrowed a lot from Kubrick in general. And then you have Taxi Driver. I would say Taxi Driver is a huge influence specifically with the VO. I mean, A Clockwork Orange as well. But the way Taxi Driver gets you so inside the head of Bickle, it’s probably one of the best character pieces in cinema. It gets you so inside Travis Bickle’s head and I really wanted to do that with Elliot.

Filmmaker: How would you characterize the politics of the show? I can’t imagine this is the type of thing that NBC Universal greenlights very easily. Did it take convincing to get them to get on board with something that’s as unusual and potentially subversive?

Esmail: Honestly, I think if it makes money they’re all good with it. [laughter] I think that’s their number one priority.

Filmmaker: Was it part of your desire to have an Egyptian American or a North African American actor to play the lead role?

Esmail: Um, no, it wasn’t. It was just my desire to cast the part with a great actor. And he played the part really well. Did I have any trouble with the network because Rami is Egyptian? No. Look, Rami is on a different level and when they saw his audition there was absolutely no question that he was perfect for the part.

Filmmaker: Is technology driving not just social and political change, as we’ve seen in Egypt and elsewhere, but the types of stories that people are telling? Your series is unimaginable in any other era than ours but it’s also built an audience through discussion online, think pieces and the like. That seems equally important to ratings these days.

Esmail:  I wouldn’t put the onus on technology. I think at the end of the day, it’s about a real person that you connect with. I remember there was this whole thing when when internet videos came around and people wanted to do interactive movies where you could choose your own adventure. I kind of always thought that that was a pretty dumb idea and it never really happened. Maybe it will, I don’t know. For me, what a show like Lost did, and a little bit like what’s happening with our show, is [that] there is a level of interactivity. People are guessing about what the show’s about, the mystery of the show and they’re going online and they’re talking about it with friends. People did that a lot and people have done that for years. That to me is a level of engagement that’s just out of pure storytelling and a character and actors that fully realize their characters, that make them feel real and make them feel like part of your life. Ultimately, to me that’s the most empathetic you can get as a storyteller, and that’s beyond the barriers of the type of technology you use.

Filmmaker: Have any sort of hacker groups or organizations have reached out to you since the show ran this summer on USA?

Esmail: Yes, they have reached out. But it was all very friendly. Thank god.

Filmmaker: Can you say who?

Esmail: I don’t want to say who. But it was very friendly, and I think that’s also a testament to our production team, who went to great lengths to really authentically reflect what hacking is all about. Because let’s face it, it didn’t happen too much in Hollywood. Most movies and TV shows about hacking —

Filmmaker: Iain’s Softley’s Hackers is a favorite of mine.

Esmail: It holds a dear spot in my heart, but no. It did a pretty poor job of reflecting that.

Filmmaker: You originally wrote Mr. Robot as a feature film. Would you ever considering returning to that format for this particular world you’ve created?

Esmail: As far as I’m concerned we are making the movie version, it just happens to be on a streaming and television and all of that. I don’t see the difference. It goes back to that other question about TV becoming great, the golden age of television or whatever. At a certain point, other than the compression of time,  it’s the same thing. You have films that are two hours long and you have TV shows that go on for twenty, thirty minutes or whatever. So that does obviously affect your storytelling. But if it’s right for that story, I don’t see the difference. I’m not shooting the show any differently, because I had intended it to be a film. We’re executing it in the same manner. I just got a lot more longwinded. But I do want to make films, yes.

Filmmaker: Assuming the show continues to be the pop cultural phenomenon it’s been this summer, how long do you see it going on? Certainly I feel like there’s a number—

Filmmaker: Have you already designed that entire apparatus of the show’s trajectory?

Esmail: Very generally. I don’t know every detail. But there is an ending, the original ending that I had in mind when I wrote the feature or when I was starting to write the feature that we’re building towards. I’m not going to drag it out or any of that just to get it to go on. In my opinion we’re in a rush to get to that ending because that’s what you do with storytelling. You’re not trying to belabor anything. You’re trying to get to that ending. You’re trying to be economical in how you tell your story and I think it’s going to be about forty to fifty hours.

Filmmaker: Many of the great television shows in this golden era it feels like around season five or six perhaps begin to fade in a way.

Esmail: Yeah, because if you look at like The Wire, it finished its run in five. Breaking Bad about five, right? It does seem to be a magic number there.

Filmmaker: Do you find what you’re trying to say with the show, now that its a recognized success, to be any different than what you were trying to get across when you first sat at your computer and started writing it?

Esmail:  I went to the Arab Spring and there was something powerful happening. There was something that got all my cousins and their parents and my uncles and aunts involved. There is that revolutionary spirit that I think is universal. I do think there’s something inside each of us that yearns for that change making society better in whatever way. And I do think maybe this show has tapped into that from the start and hope it continues to.