To Protect and Preserve 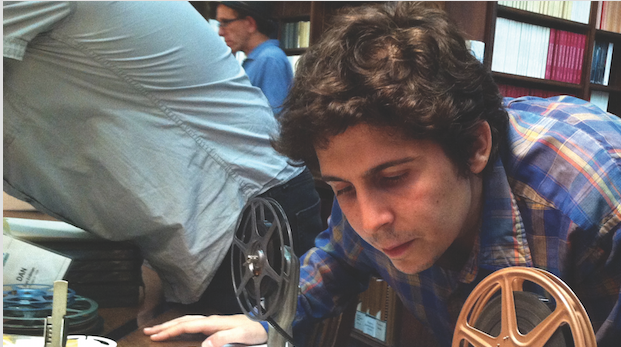 How’s this for the elements of an amazing education: an internship at the studio of David Byrne, independent study with experimental filmmaker Jem Cohen and a thesis project dedicated to assessing and organizing all of the videos documenting the live shows of the band Fugazi? The education then results in a freelance gig organizing Sonic Youth’s archive, which eventually leads to a position as a media conservator at the Museum of Modern Art, where, on any given day, you might be reviewing the museum’s video collection or prepping for an expansive survey of the incredible work of Bruce Conner.

This line-up sketches the dreamy life of Peter Oleksik, who indeed currently serves as assistant media conservator at the MoMA. Olesik tapped into this envious educational trajectory via New York University’s Moving Image Archiving and Preservation program (MIAP), which was founded in 2003 within the Cinema Studies Program in the Tisch School of the Arts. Howard Besser served as the program’s founding director and continues to teach in the program and serve as associate director; the current director is Dan Streible, and Mona Jimenez serves as another associate director. Together, they oversee an intensive, two-year Master of Arts program dedicated to teaching “the theories, methods and practices of moving image archiving and preservation,” with a strong emphasis on internships.

MIAP’s curriculum covers moving image archiving and preservation, with special attention as well to sound, video, television and complex media, which serves as a catch-all term to encompass everything from websites to video installations and games. “We also learned the differences among a library versus an archive versus a museum,” explains Peter. “You’re given a broad overview of all of the institutions who might need an archivist, so you can really go anywhere.”

Besser adds that the program has been dealing with issues related to emerging media formats from its inception. “Because of our focus on ‘how to think through solving issues,’ coupled with our emphasis on ‘lifelong learning,’ I think that we’re well-positioned for future changes in file formats and technologies. Probably the biggest challenge our field faces in the next decade is how to save a reliable copy of a work when each viewer sees a different version.”

On the West Coast, the University of California, Los Angeles is also home to a program dedicated to archives and preservation. Founded in 2002, the Moving Image Archive Studies (MIAS) program began as a collaboration spanning the Information Studies department within the Graduate School of Education and Information Studies; the Film, TV and Digital Media department in the School of Theater, Film and Television; and the Film and Television Archive, also in the School of Theater, Film and Television. With two schools and three departments, the program was at once an ambitious attempt to achieve interdisciplinary and widespread support, and a doomed administrative effort bogged down by too many participants whose attention was often elsewhere.

As a result, the program has recently been revamped to become the Masters of Library and Information Science (MLIS) program. It is now housed within the Information Studies school, and the curriculum takes advantage of the focus on one of the prescient aspects of the original program — namely, its attention to information understood broadly, rather than film preservation in the more narrow sense. According to Snowden Becker, the MLIS program manager, “Students will now take the MLIS core curriculum and then they will be able to tailor the program to their specializations.” One of those specializations is Media Archival Studies.

One of the advantages of this shift, explains Snowden, is that the emphasis on the feature film format that came with the first iteration of the program and its link to the School of Theater, Film and Television, gives way to a more inclusive understanding of media. “My own research area is small gauge and amateur film preservation,” she explains. “That led me to considering how audiovisual materials are used in law enforcement.” She goes on to point out that “more and more agencies are deploying video cameras, and they’re generating vast amounts of footage, often in proprietary formats.” She continues, “What does it mean to create these recordings and what do we need to know to have people caring about recording and retention policy?” Snowden is currently writing a proposal to convene a national meeting to address these questions.

Whatever the outcome of the meeting, the students emerging from both the MLIS and MIAP programs will be prepared to handle all of these proliferating ad hoc archives of material. “Our students have to keep one foot in the 20th century with the earliest moving image devices, and another foot on a constantly moving target in the 21st and 22nd century — that’s a big stretch!” admits Snowden.

In addition to the MIAP and MLIS, there are other film preservation programs. The Jeffrey Selznick School of Film Preservation at the George Eastman Museum, for example, offers a Master of Arts through the University of Rochester, and there are new programs and certificates emerging both nationally and internationally.

Peter and Snowden report that the job market is wide open for graduates of both the MIAP and MLIS programs. “Everyone I graduated with got a job,” asserts Peter, whose own career so far demonstrates the variety of positions available to graduates. He goes on to highlight the fact that, contrary to the images we might have of musty archives and a rather slow-paced occupation, things are changing. “Film archiving used to be thought of as a passive thing,” says Peter, “but it’s really active. The paradigm of putting something on a shelf for 100 years doesn’t exist anymore. Instead, you’re constantly checking on things. And it’s a race: You’re racing against format obsolescence and industrial change. And to do that, you’re learning all the time.”

Beyond enjoying robust job opportunities, graduates of preservation programs serve as, in Howard’s words, “the next generation of stewards of our cultural heritage.” As such, these students need to be passionate, agile, vocal and articulate. He hopes they’ll stand up to administrators and politicians, and be attuned to collections and methodologies developed in all contexts, rich or poor, national or international. And he hopes they’ll be advocates for the preservation of the least commercial works, “including independent productions, avant-garde works, home movies, news footage, industrial films, ethnographic works, works by or about marginalized communities, cellphone/police/activist videos” and more. This is training, therefore, not just for a job, but for active cultural leadership, and a chance to preserve works that might otherwise be neglected.