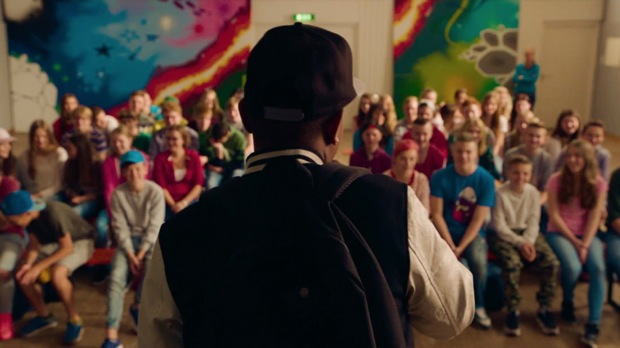 by Vadim Rizov
in Sundance, Sundance Features
on Jan 23, 2016

Chad Hartigan’s Morris From America has an unpromising logline, but so did his previous feature, This is Martin Bonner (an unlikely friendship between two men looking for redemption etc. etc.), and that turned out pretty well, so I wasn’t worried. Morris is a coming-of-age crowdpleaser, in the vein of “it’s been 18 years since Rushmore, but this version is different because…” (Son of Rambow, Submarine, et al.). I know a lot of people (I’m one of them, no shade implied) who find a deep satisfaction in action movies novel only in their details and crispness of execution while placing no value upon originality per se. That’s a principle which, of course, could equally apply to comedy, horror, et al., but the crowdpleaser is a different beast. There’s something slightly insulting about depicting epiphanies and personal growth via prefab screenwriting workshop beats and the audience’s engrained knowledge that All Will Be OK, or, at least, optimistically “unresolved.” But if I’m being fair, just as an action film depends upon the precision and just-different-enough quality of its execution, a crowdpleaser could find room for affecting human life within a screenwriting lab’s strictures.

All this to say that Morris From America is not, in its overall arc or familiar trajectory, surprising, but it is a crowdpleaser that actually pleases because of how specific it is. We’re introduced to father Curtis (Craig Robinson) and son Morris (Markees Christmas) hanging out in a nondescript residence that could be anywhere in the US; only outside does it become very apparent that there’s no town in America that looks like this. The setting is Heidelberg, Germany, and, to a limited extent, the movie is pleasing travelogue Europorn: castles, rivers, non-vile/archaic architecture. Curtis works for a German soccer teem, so Morris has been displaced from the US. The only black faces the two see the entire time are each others’; you could imagine the general story arc taking place anywhere else, but the specific feelings of total cultural isolation are a little different. This is not one of those movies in which the characters “just happen” to be black, which is a cliche often applied by critics and viewers uncomfortable with cultural difference. No one ever “just happens” to be black (or queer, or generally POC, or whatever) when matrices of racisms/sexisms/etc. render that an impossibility. In fact, it’s possible to imagine this same plot taking place in the US, but it’d probably be a more uncomfortable watch if a clueless white American asked Morris if he was good at dancing or basketball, as all black folk are, instead of a German whose ignorance is a slight excuse; setting the film abroad makes a different point about global racial stereotypes without feeling too close to home. (Whether that lets viewers off the hook too much is an entirely other question. I should also note that the project began as an expansion of white writer/director’s Hartigan’s own memories, but this is a much more interesting variation that cuts out mopey white teen angst.)

If I’ve avoided describing the plot, that’s in part because you’ve seen this before: Marcus develops a very unrealistic crush, and his personal growth is directly tied to his attempts to impress slightly-older girl crush Katrin (Lina Keller). Time and the increasing perception of Wes Anderson as a color-coded twee evader of emotions has softened the fact that Rushmore can be an exceptionally hard film to watch. Its protagonist repeatedly falls into public shame partially of his own poor decisions, partially due to snares set by cruel teens. Morris doesn’t dilute this component; there are two moments where he’s lured into a situation that seems doomed to turn out badly that reminded me of poor Carrie walking up to a pig’s blood bath, unaware of her imminent embarrassment. No lie, I covered my eyes and winced throughout. Every shot is at least good, and with regular DP Sean McElwee, Hartigan deploys a number of enjoyably aggressive zoom/Steadicam shots that both contextualize characters in their settings and keep your eyeballs moving. I understand complaints this is too generic a coming of age, and it is a very Sundance-y, two-humiliations-for-every-moment-of-grace type movie. But the moments themselves work, and the emotions are both personal and politically charged.

Shorter notes on two other films: Matt Johnson’s Operation Avalanche attracted considerable attention in Canada before its premiere, in part because of the director’s willingness to a) talk critically and unsparingly about why Canadian film subsidization just doesn’t work; and b) discuss his decision to skip TIFF and to premiere instead at Sundance. (This interview is a good place to start.) Johnson’s debut, The Dirties put the actor/director and his foil Owen Williams in a real high school, mashing up fly-on-the-wall footage with a mass-shooting plotline. Though Avalanche is different in just about every other way, it’s, oddly enough, kind of the same movie: once again Johnson is the loud, brash filmmaker, pushing his more reserved/realistic partner Williams into incrasingly dangerous situations, and things end with mortal consequences. The differences are admittedly considerable, since Operation Avalanche purports to be a documentary about how the moon landing actually was faked. The period pastiche is pretty remarkable: the movie begins in the best faux-period 16mm black-and-white I’ve seen, and the stock’s faux degradation is equally convincing. The movie eventually switches to color, which is also convincing (except when it’s intercut with archival footage whose grain structure is entirely different). There’s a good deal of self-reflexive stuff about making a movie in secret (the shoot in part involved infiltrating NASA under false premises). In terms of how detailed the film is about the production logistics of setting up a hoax, Avalanche is oddly similar to another Canadian’s magnum opus, Nathan For You. It’s all wildly impressive technically (even if Johnson’s very Canadian pronunciation of “sorry” gives the game away a bit), but increasingly grim for no reason I can tell — if there’s an actual political point to this besides scratching tantalizing alternate-history conspiracy theories and their allure, I couldn’t discern it. I’ll be there for his third film regardless.

Penny Lane’s NUTS! tells the so-strange-it-has-to-be-at-least-partially-true story of Dr. John Romulus Brinkley, a prototypical American huckster. From 1917 to 1941, Brinkley raked in millions with a variety of obviously nonsensical treatments: goat testicle grafts to increase male virility, “Incan” skin creams to increase vision, etc. His long and checkered career included almost being elected governor of Kansas and founding the radio station that would eventually propel Wolfman Jack to national fame. Oddly close in physical resemblance to Robert Altman (the North Carolina native set up shot in Kansas, albeit not Kansas City proper), Brinkley is seen in the odd archival film or home movie. Some of these are found objects of a very strange nature, with the doctor gassing on about the beauty of flowers and catching tarpons with equally flowery, energy-sapping language. The bulk of the film, though, is animated footage reconstructing his life in six chapters, with voiceover from a narrator so cheerfully upbeat and on the huckster’s side you suspect something is up very early on; the final structural pivot isn’t a big shock. I had trouble staying with the varied animation styles, and the sense of humor is all over the place, but the well-researched narrative drive pulled me through. Brinkley’s increasingly demagogic manner, somewhere between Huey Long (reputedly one of his goat graft patients) and Donald Trump railing against big government, are unnervingly contemporary, and the film spins an increasingly hallucinatory yarn in which talking-head interviews serve as a momentary chance to relax rather than a stultifying obligation.