On Being an Independent Filmmaker and Watching Star Wars: The Force Awakens Six Times 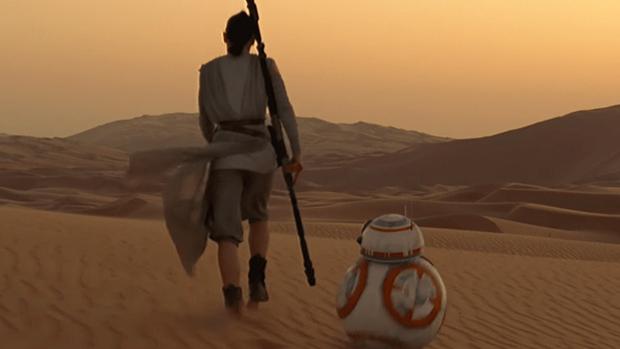 Like a lot of people, I went to see Star Wars: The Force Awakens when it opened in December. By my fourth screening, I started to feel embarrassed. By my sixth, I was at peace again. Most times, I went with combinations of family and friends (though that third screening was definitely solo) because Star Wars had helped shape these relationships years ago. Just as important, it was the series that hooked me and so many of us on filmmaking.

In 1983, PBS aired From Star Wars to Jedi: The Making of a Saga during their December telethon. I was in second grade and had never seen a behind-the-scenes documentary before. My friends and I were already creating our own Star Wars stories because the toys encouraged us to (we couldn’t exactly replay the films with Admiral Ackbar, three Gamorrean Guards and a Stormtrooper). The documentary showed adults doing the same things we were: playing, and making that illusion seem real. Soon, my friends and I were planning our own films, including a version of Star Wars: Episode VII.

And so here I am, 32 years later, still chasing the dream. In November, I completed the first draft of a new screenplay titled Colewell. It’s about a widowed postmaster who is forced into retirement when her office is closed — a quiet character study set against the misty farmland and quarries of Eastern Pennsylvania. We developed it at The Biennale College, and I’m now steeling myself up to get it made. Any filmmaker knows that developing projects can be exhausting and, at times, demoralizing. In a lot of ways, seeing The Force Awakens has been an opportunity to go back to the well and refill the cup.

Seeing the film while working on this script has also highlighted a disparity between what I’m watching and making. I intentionally went into Colewell wondering, “How many narrative elements I can I cut and still have a story?” “How much agency can I remove from my protagonist?” “Can I build this around the repetition of her daily routine instead of a plot?” Meanwhile, films that have tackled these questions sit in my Netflix queue, unwatched, as I marvel at how Spielberg and Mathison structured E.T. to tell the story of an angry kid learning to feel empathy again after a divorce.

Obviously, most cinephiles enjoy a range of films with the emphasis shifting at times. From second grade through high school, the films I was attempting to make were very similar to those I was watching. This was a problem because we would spend months building props and models for our epic sci-fi thrillers only to lose interest. By college, I was growing frustrated by my inability to make progress and ready to throw in the towel. Fortunately, my film professor, Gerry Molyneaux, saw this and suggested I watch some John Sayles films. Sayles ledd to Cassavetes, Charles Burnett, Jim McKay and Eugene Martin. In these filmmakers I found the authenticity and pragmatism I’d been searching for. For the next ten years, what I was watching and what I made were similar once more, culminating with my feature, The New Year Parade, a doc-fiction hybrid character piece.

After our festival run wrapped, I noticed my viewing patterns shifting once more. The New Year Parade had been a handheld, kitchen-sink drama, but now I was binge-watching classical filmmaking. I worked through box sets on John Ford and Hitchcock, Capra and Kazan. Initially, this made sense as I wanted to improve my visual storytelling. During this time, I also started working as a VFX producer, which left little room for my own work and the gap widened further. In hindsight, I attribute some of this to mounting frustration. It can be difficult to watch the newest festival darlings when you want to be a darling yourself. Whenever possible, I continued working on realist screenplays while re-watching Jaws, Close Encounters of the Third Kind and On the Waterfront.

Films we watch are like places we travel to. We go to see something new, become inspired, educate ourselves, or to simply relax. The films we make are where we’re from. We try to stretch, but our roots guide us back. George Lucas has claimed for most of his career that he wanted to be an experimental, non-narrative filmmaker, but something brings him back to Star Wars and Raiders of the Lost Ark. It’d be cynical to say “money.” Once you’ve imagined characters and a place it is difficult to leave them unrealized.

Which leads me back to the one film I’ve watched more than The Force Awakens in the past year. It plays late at night once everyone has gone to bed, or on the train, as I walk to work, or while I’m taking a shower. It’s set in a misty quarry town in Eastern Pennsylvania and bears resemblance to every film I’ve seen and yet is uniquely its own. Now that I’ve watched Colewell, I can’t wait to make it so that you can as well — perhaps, while prepping that intergalactic space opera.