“A Beloved Charming Guy with a Dark Side”: Director Steven Caple Jr. | The Land 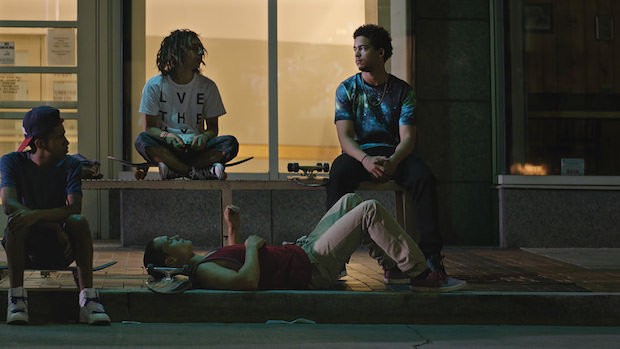 On surface you see a film about four boys who are trying to escape their troubled circumstances, but what people don’t know is that each boy’s life is a different stage of my personal life. Starting with Boobie (which is my childhood nickname); he’s a black and Puerto Rican kid who lives with his father and mother. When I was younger I lived with both my mom and father and my dad worked at multiple factory jobs like Michael K. Williams’ character. But when my father’s drug addiction became too much for my mother she left him and we had to move in with my grandmother, uncle and cousins in a big house. This is where Patty Cake’s home situation comes into play – living in a biracial house, with no real source of income, and sharing rooms with my cousins. It was fun at first, but it got tiresome as we got older. Then when my mother moved into her own apartment we were like Junior’s household. Just me, my mom, and younger sis. And my mom worked in nursing just like Natalie Martinez’s character, and we barely saw her because of her work hours. And then time to time I would see my father, but I always had this stigma and grudge. Even when he was trying to be clean from drugs I couldn’t help but blame him for all our financial issues and problems at home. I blamed him for my mom’s struggle, and this is where the Cisco and Uncle Steve (Kim Coates) relationship formed (hint: the name Steve, which is my father’s name). A beloved charming guy with a dark side.

I used the emotions I had built up against my father and put them on the page. There’s even a scene in the film involving a bathtub that was an incident that occurred in real life when my dad had a relapse. It panned out differently in real life than in the film, but I used the thoughts going through my head and the things I really wanted to do and placed them on screen. Our relationship is much better now than before. He came on set once and the actors would accompany me when I would visit him at his sobriety house every other weekend.