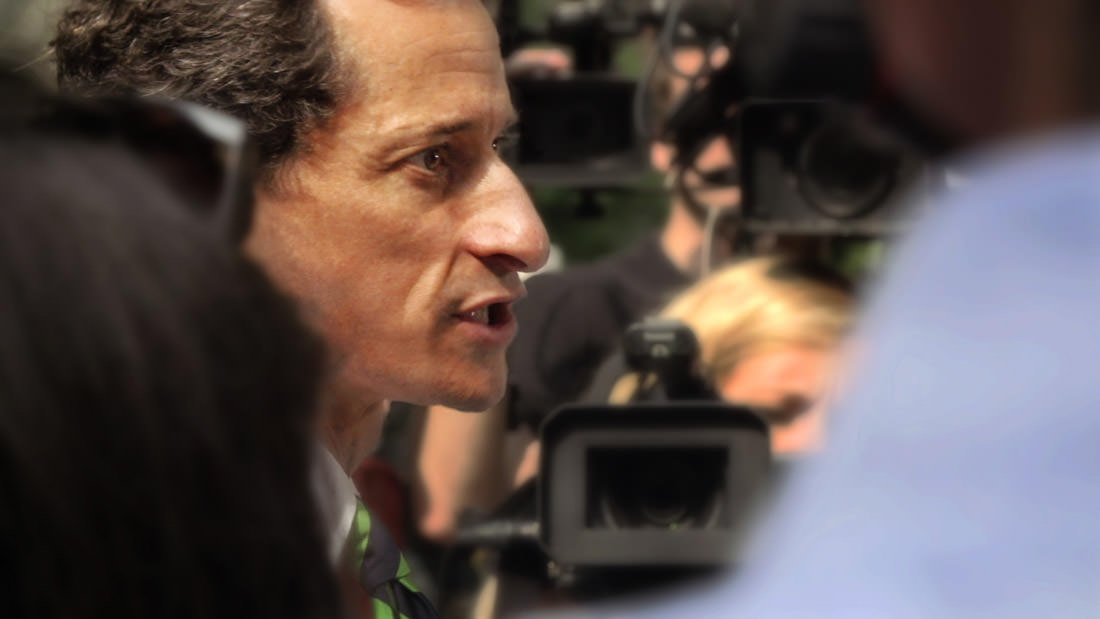 I watch the local news a lot. It’s a fun, seemingly randomized mash-up of crimes caught on security cameras, traffic and weather updates, forced banter, cooking segments, deep concerns about marijuana use and “reporting” that’s thinly-veiled support for the NYPD, etc. Sometimes you see a story and wonder whether it’ll remain tristate fodder or leap to the national agenda: e.g., I wondered that when the stairwell shooting of Akai Gurley was first reported, and I was equally uncertain when Anthony Weiner’s 2013 run for NYC mayor was derailed by the “Carlos Danger” sexting “scandal.” It seemed like an OK joke but not much of a substantive story, and I’m not clear on exactly how much it seeped into the national consciousness. So I enjoyed Josh Kriegman and Elyse Steinberg’s Weiner, in part because it was like a long flashback to local news broadcasts from five years ago, and similarly am unsure how much interest it has for wider audiences.

The documentarians had great access (possibly enabled by Kriegman formerly acting as Weiner’s district office chief of staff). This appears to be an old-fashioned verite doc in which hundreds of hours of footage are then gold-prospected for the most interesting nuggets. That makes up for the fact that Weiner is functionally shot at best (at times, for no apparent reason, with a fish-eye lens); editor Eli Despres has done exceptional work. An opening montage recap of Weiner’s fall and the optimistic opening days of his comeback mayoral campaign is so briskly invigorating that on-the-nose use of Ace Frehley’s cover of “New York Groove” for the backdrop doesn’t seem seem like overkill: he’s back!

A movie of the online news moment, Weiner‘s title is shot through a variety of familiar fonts pertaining to very specific logos (Gawker, Politico et al.). There is frequent use of news footage, and sometimes to speed things up there are montages in which tiny squares of TV bits about the same story scroll in a feed at the bottom of the screen, with one selected from those passing by to blow up, like an updated Twitter for live TV. But the core of the film is old-fashioned retail politics, with all Weiner’s zeal for municipal campaigning and phone calls to raise funds from supporters short-circuited by the second sexting “scandal.”

I remain skeptical of how important this revelation is; in the midst of Bill De Blasio’s tremendously disappointing administration (his approval rating was recently hovering at 38 percent), it still seems a minor shame that Weiner didn’t have a chance to try to win voters over. (There’s something about the mayoral office, especially post-Bloomberg, that seems doomed to defeat even the best, sincerest intentions, but at least it might’ve been fun to watch Weiner try.) It wasn’t just the sexting, of course. Weiner’s prickly, unable to walk away from a verbal confrontation, and he knows it: “I have this virtually unlimited ability to fuck up things day by day,” he observes. Watching Weiner repeatedly watch his public blow-ups back at home is a riveting portrait of masochistic self-flagellation. The film is, nonetheless, ineradicably drawn back to arguably the least important thing about Weiner’s campaign, fulfilling his prediction: “The laws of entertainment gravity will suck the documentary into the same vortex.” We get the politics of petty posturing we deserve.

I don’t watch a lot of true crime stuff, so I was more or less compelled by Will Allen’s Holy Hell, if only for the novelty. The film was billed as directed by “anonymous” until days before its premiere, to avoid hassling/interference from the cult leader and his adherents profiled here. Allen spent 22 years with a man he alternately called “Marcel” and “Andreas,” joining the Buddhafield in West Hollywood in 1985. Personally, I’d be very skeptical of any person who said that if I called him “Master” and agreed to act as his masseuse and/or breakfast omelette maker, he’d eventually take me out to the woods and show me God. But that’s just me: Allen has his testimony and that of fellow cult members out of a 100 strong. (“We used to joke that if this was a cult, at least it’s a really good one,” one recalls.)

Because the cult members’ yearnings are of the fuzziest, Sedona-meets-California “I want a spiritual experience” type (and because I’ve never had a spiritual yearning in my life, which probably speaks poorly of me), I had trouble exercising empathy from the get-go. Talking with a colleague after, they reminded me that people who fall for cults frequently have some kind of terrible thing in their personal life or past that makes them vulnerable, so it’s not great that the movie kind of made me hate the subjects for their excessive gullibility. I was extremely displeased to learn that the Buddhafield eventually fled Cali for my hometown of Austin, meaning I was probably in close proximity to them whenever I went to Barton Springs pool or drove down Slaughter Lane, etc. Allen draws extensively on his videos, made as the group’s official videographer, opening with some kind of beach love-vibes thing at a Park City beach. (In leaping from Sundance to SXSW, the movie unintentionally rhymes cults with two of America’s biggest independent film fests, but I doubt any shade was intended.)

Holy Hell is competently/unimaginatively made, with lots of talking head testimony and a hamfisted score to hammer home the point. Besides finding myself guiltily infuriated with the cult members, there were no big surprises: financial and sexual exploitation unsurprisingly both play into it. Investigating his master’s past, Allen eventually confirms that “Marcel” was once a gay porn star, with the footage to prove it (presumably to make the film more quickly/easily sellable, a black box covers his member). There’s a non-confrontation at the end, and I was perhaps most unnerved to see that Allen evidently let his subjects write their own end-credits bios. I’m not sure anything could have made me more sympathetic, but reading that one former cult member loves selling “high-end real state” and that another’s videos have racked up over 45 million YouTube views didn’t exactly do the trick.