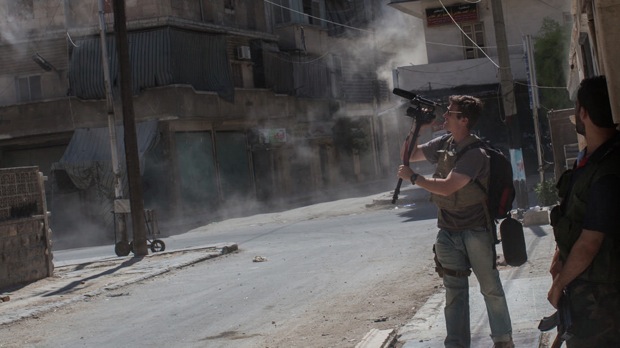 Developing a documentary about the murder of an innocent photojournalist at the hands of ISIS would be an emotional experience for any first-time feature filmmaker. Now imagine that the slain journalist in question, Jim Foley, is someone you’ve been friends with since childhood. This is the situation filmmaker Brian Oakes found himself in when making Jim: The James Foley Story, a film that looks at his friend’s death as well as the chilling aftermath the Foley family had to endure stateside. An intensely personal experience, Jim will air on HBO next month following its world premiere in the U.S. Documentary Completion section of the 2016 Sundance Film Festival.

Filmmaker: Creating a personal documentary about someone close to you is, I imagine, an incredibly difficult task. Given the tragedy Jim Foley experienced, how did you choose his story as the one to make your first feature on?

Oakes: With Jim’s death being so public, I felt very protective of him. I was uncomfortable with some of the things that were being written and how Jim’s image was sometimes being used [in the media]. I began to feel a sense of responsibility to my friend and so I wanted to tell his story. I knew that someone might try to tell it and so I wanted it to be someone who knew him. Jim was a journalist who was telling the stories of the civilians caught in the midst of Syria’s civil war. These stories are so relevant today, and they’re stories that were important to Jim. I wanted to make a film that would carry on the work he was doing.

Filmmaker: Jim Foley’s murder was captured on film for all to see (if they so chose). What are your views on that footage being released to the general public? Is it necessary to show the horrific crimes that ISIS commits or is some extreme war footage off-limits?

Oakes: The internet is still the wild west and the days of turning on the television at six o’clock to get your news is long gone. I do believe that private entities such as YouTube have a responsibility and a right to remove video content they deem inappropriate. I don’t think you can say, “It’s necessary to show these horrific crimes.” We are all entitled to our opinions just as we are free to watch whatever we would like. That said, I believe it’s very important that we understand the context of any video(s) that we’re watching. You need to ask yourself, “Who is behind the camera? What is this being made for, and for whom?” In the case of ISIS’ videos, they are recruitment tools being used to attract disenfranchised people to join their cause.

Filmmaker: As the film is about a very topical political militant organization, was it important for you to capture a politically conscious view of the material? Were you attempting to blend the personal with the political?

Oakes: The film is purposefully apolitical. The militant organization is a part of the story but they are just in the background. There are, of course, many complex layers of political issues that have arisen from Jim’s story, but I wasn’t interested in focusing on those. ISIS, government policies, and geopolitics are evolving things that are constantly changing. My focus was Jim and the life he led.

Filmmaker: In a press release for the film, you were quoted as saying, “It’s important that we understand the significant role of today’s conflict journalists and why they risk their lives to tell the world how bad it can be.” Who are some of the conflict journalists you admire and how does your film touch on their occupational challenges?

Oakes: Four of the journalists I’ve come to admire are four of Jim’s colleagues in the film; Nicole Tung, Manu Brabo, Clare Morgana Gillis and Zac Baillie. Nicole said something to me in one of our interviews that really resonated as I was delving into why conflict journalists risk their lives. She said, “We write the first draft of history, and without journalists documenting what is happening on the ground and witnessing it first hand to tell the world what is happening, we cannot move forward as a civilization.” The film touches upon their occupational challenges, but more importantly, it delves into why they do what they do.

Filmmaker: How did HBO Documentary Films come on board? Will there be a theatrical release in addition to the HBO premiere?

Oakes: HBO is a great home for the film. They came on board before the film was finished and Sheila Nevins and Jackie Glover have championed us from the first rough cut. There will be a theatrical release immediately following the Sundance Film Festival and right before HBO’s premiere on February 6th.