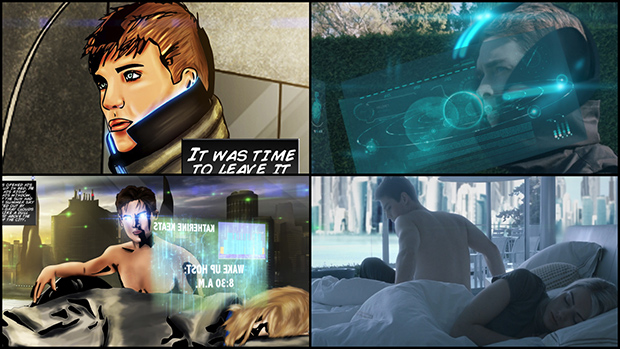 by Michael Murie
in Directors, Interviews
on Feb 11, 2016

In Part I, David Simpson, author of the bestselling sci-fi novel series Post-Human, talked about how he became first an author and then a filmmaker by creating a short promotional piece for his series. The resulting video represents what Simpson thinks the opening sequence of a Post-Human film might look like.

He accomplished this with virtually no experience, a tiny crew and a location that cost a third of his budget.

In this Part II he talks about the equipment he used, and how he planned and executed the production.

Filmmaker: How did you plan out what you were going to do?

Simpson: We met with the actors at my apartment two or three days prior to shooting, and we rehearsed it. I’d only been able to visit the location once before that, and I brought in my Blackmagic Pocket Cinema Camera but I was just walking around for five minutes. 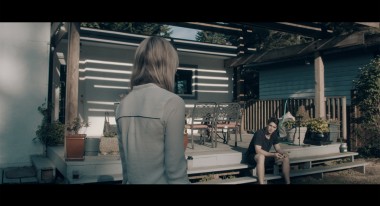 I wanted to show the actors the space they were going to be in, so what we did was we found reasonable approximations in my apartment. We had the scene where they’re out on the beach, so we just used the little deck that I have out back. We used my bedroom in place of the actual bedroom, my bathroom in place of the shower, and we just blocked it.

That was great for the actors rehearsing and setting up what we were going to do. But it was also for us as much as it was for them, because we really wanted to practice our camera work. The crew was just me and my wife and one other person, a camera assistant who’s only 18 years old — he’s at NYU for film now. That was the entire crew. 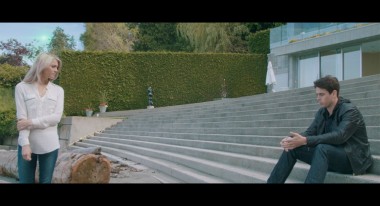 Filmmaker: Was the shooting day essentially your first time really shooting something after you bought the camera?

Simpson: Well, almost that. We got the camera, and my wife and I went out to test it. We had a different lens at first, I think we had a Rokinon, and then we switched to the Sigma 18-35 mm. We got a Metabones adapter as well, so the camera was in really good shape.

Filmmaker: Why did you switch lenses?

Simpson: We switched lenses because we had done some tests and one of the shots that we really wanted was the very first shot of the lead male waking up. We wanted a nice close up, and the Rokinon had a little bit of a fisheye look to it that I didn’t like. We started doing research to see if we could get another lens that would be variable and wide enough, and we found the 18-35mm Sigma and it was just…it didn’t do that fisheye. It looked really fantastic on that opening shot, and that was the reason we switched. 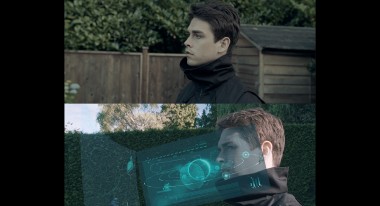 Filmmaker: What other equipment were you using?

Simpson: We were using the Glidecam, and as we worked with the Glidecam we also realized we’d really like to have a slider, so we got a slider as well. The equipment that we had was: the Blackmagic with the Metabones and the Sigma, and then some filters, and we had two tripods, a slider and a Glidecam. And then of course, we had the sound equipment.

Filmmaker: What were you using for sound?

Simpson: We had a Zoom and a Rode mic, but it didn’t capture sounds super well, so what you hear in the movie is actually completely rebuilt sound. I’d done radio at university, so I had some experience with sound and we were able to rebuild the sound.

We knew from what we captured on the day how amazing the water sound is. It was such a serenely beautiful location. It was in the morning, and the water was lapping up in this little cove; it was so beautiful. We were able to re-create that just by grabbing sounds all over the place. We re-looped the dialog, and it all came out sounding very good.

Filmmaker: You re-recorded the dialog?

Filmmaker: Had you written a script or a storyboard? How had you planned out the shooting?

Simpson: I’d actually written a script a year earlier when I was working with a production company, so the actors knew that we were going to do the opening up until when the character flies off. The idea was to recreate what the movie would look like up until the opening credits. They understood that part of it. 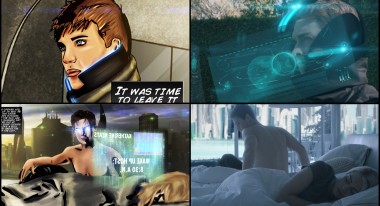 I’m an artist as well, and I’m working on a graphic novel adaptation with my wife and another artist in the US, and we had the opening that we were able to show to the actors. I also had a big sketch board with me, and I was able to draw each shot for the actors so they would know where the camera was and how I was picturing things.

I believe on the day we had something like 30 shots that we wanted to get and we got them all. In the actual film I think it’s closer to 19 shots that we used because we did some cutting to make it faster paced.

Filmmaker: If you did it again, what would you do differently?

Simpson: I’d like more time in the location. It was amazing that we were able to do what we did in three hours, and I don’t think it looks like it, but the sacrifice was that we really only had two or three takes. I was running between camera setups, so I wouldn’t necessarily say that that was an ideal circumstance.

Filmmaker: Any other advice?

Simpson: The cautionary part is that when you do it this way you’re taking everything on your shoulders. It was up to me to get the insurance, our actors were union actors so we had to do that and I’d never gone through that before. We had to insure the place, the location, and these were all new things to me.

You have to do the job of everyone; you’ve got to take care of your actors and make sure that they’re treated really well. You’re doing your own catering, you’re doing your own transportation; unless you’re cabbing people around. We even had to design the costumes, and find someone that could make it. We designed the helmet and then we had a 3D artist do a 3D sculpt of it, then we literally bought a MakerBot second hand and 3D printed that. 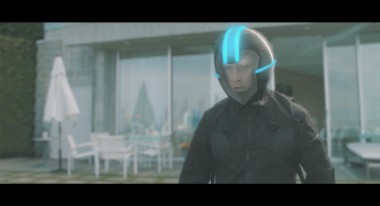 We had to learn about visual effects as well, because we didn’t have a visual effects supervisor on the day, and we didn’t even know the fellow that was going to end up doing the visual effects. My wife and I had to get familiar with the visual effects software that’s out there and what it’s capable of doing so that when we filmed it we knew that we could visualize a skyline out there, and that we could make the orange juice dissolve into nano-technology. I’m sure I’m forgetting so many things that we did, yet you have to do all those jobs. It is a lot of work, but it’s not impossible.

Simpson: I am obviously very interested in getting Post-Human into film, and the dream would be to actually get it to theaters and as a franchise, but I would do that in the studio system for sure.

But I feel really confident that there’s also another way to make films, and I actually do have plans to do a feature but it wouldn’t be Post-Human. It will be something that isn’t sci-fi. The plan is for it to be horror-realism and the equipment will be a little bit different but I’m still going to be using the Blackmagic. I still would use my Pocket Cinema Camera, but I think I’d really also like to get a Production 4K Cinema camera as well and a shoulder mount rig would be nice too.

We talked to one of the actresses about it, and I think you could make a 90-minute feature using pretty much the same methodology. I’ve got a lot of confidence now that I could direct something and do it far, far cheaper than a studio film.