“Shooting the Interview Like a Game”: Kamilla Pfeffer on Who is Oda Jaune? 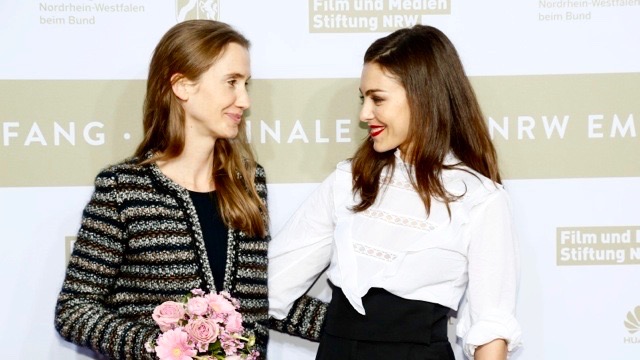 by Taylor Hess
in Directors, Festivals & Events, Interviews
on Mar 1, 2016

After seeing only one Oda Jaune painting in an art catalogue at a bookstore, Kamilla Pfeffer had found her next subject. Born in Bulgaria, Oda Jaune is a German painter currently based in Paris, and has had her work exhibited all over the world. The nature of her paintings and the process of her practice are the primary interests in Pfeffer’s documentary, Who is Oda Jaune?, but how to first engage with the introverted artist is Pfeffer’s requisite challenge.

“Oda’s work has a way of speaking to my irrational side,” says German actor Lars Eidinger during his short interview with Pfeffer. Several notable conversations about Jaune’s paintings, including one with Artistic Director of Berlin’s Schaubühne theatre, Thomas Ostermeier, are interspersed between Pfeffer’s exchanges with Jaune herself. It’s when the intrusion of a small film crew disrupts the artist’s ability to paint that she’s most candid and communicative about her methods. How Pfeffer balances these conversations with Jaune is ultimately what the film is navigating.

As one of twelve world premieres selected to screen in the Perspektive Deutsches Kino section of the 66th Berlinale, Who is Oda Jaune? is a simple but elegant meditation on the mystery between painter and painting, and our hunger for questions in the absence of answers.

How did you get Oda involved? It was quite difficult to get her to agree to the movie. It took me almost two years to convince her. She’s a very shy and skeptical person, and she needs to be in her own world in order to work. Initially, I thought we’d be able to meet at her atelier, go in and observe her painting, but after 1 hour and 17 minutes in her small studio for the first time, she told us that it wasn’t going to work. Looking back, I think it’s great that we had this conflict; otherwise we would have had a painter painting, which is not necessarily so interesting. Instead, she was able to explain how we disturbed her, how we interfered in the process between her mind and her hand. In the first two periods of filming, we spent eight or nine days in her studio, and even though we couldn’t really observe her, we could speak.

The interview sequence didn’t disturb her or seem too invasive? We did the main interview at the end. It was the last thing we shot, six months after our first attempt to capture her work process. I asked whether she knew the famous Proust Questionnaire and told her we’d try to play a game in that format — short questions, short answers. The idea of shooting the interview like a game appealed to her, and it worked quite well. It wasn’t about the facts of Oda; it was about trying to feel her, to make parts of her inner world more visible. It was really an experiment, and I ended up learning a lot about filmmaking — how to capture someone and not exploit them.

And still preserve the mystery of her as an artist. Yes. I often really dislike when artists are asked why they paint what they paint. I think it’s very hard for many of them — and especially for Oda — to answer those questions. So the challenge was to get in contact and to connect with her rather than ask why she paints certain images, why there are so many wounded female bodies, or whether she’s a feminist or something. Her paintings are often provocative, but her intention isn’t to be provocative. She’s a person who observes very precisely what’s around her, but isn’t analytical or moral or ethical about what she sees. She’s just true to what she sees and is able to translate it into her paintings. But that’s more an unconscious process.

What questions do you dread as a filmmaker? In general I’m not afraid of questions because you can always refuse to answer. But regarding this film, I’m often asked, “Do you know who is Oda Jaune?” But the title of the film is rather a leitmotif, and it isn’t supposed to give an answer so much as it’s supposed to pose the question.

You must have had your own impressions and assumptions about Oda going into the project. How did that impact your engagement with her? Oda has a story here in Germany that isn’t easy. She’s the widow of Jörg Immendorff, who was a very famous German painter. The story was always that he was the famous painter and she was his student and they were 34 years apart. There’s been lot of press and gossip surrounding that story, but it’s not part of the film. We did just ask her about how she found her way as an artist beside a painter who was already established, but more importantly, we wanted to make a film that was personal, not private. Her private life was never my interest. It was always about how to approach and connect with Oda – the artist, and in the end, I felt attached to her in a way that I can’t explain really.

Would you have filmed anything differently had you known what you know now? In the beginning, I had a completely different idea of what the film would be, but I’m really happy I didn’t know what would come. If I’d known at the start that it would take three-and-a-half-years, for example, I probably wouldn’t have started. But that’s documentary filmmaking. It’s hard that it takes a long time, but I’m not alone in this. The only question really is how to manage.

Did you screen the film for Oda before she’ll see it in here at the world premiere? Yes, we watched the film together at her studio in Paris. At the beginning she was hiding behind her big scarf because she was afraid to see herself. She’s very self-deprecating so she laughed a lot while we were watching, but she was also very moved in parts. In the end, I think she was really surprised by how she was seen and by how she was able to see herself in a way she hadn’t before. She always felt that she couldn’t speak about her art without destroying it, but I think she saw that she can speak about it and say something. In a way, that is very special.