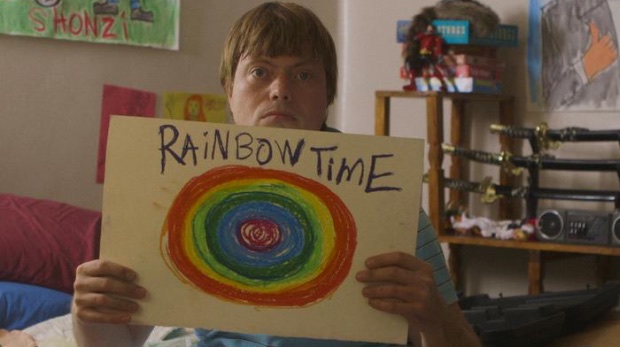 In his follow-up to Manson Family Vacation, director Linas Phillips turns his attention to the troubled relationship between Todd (Timm Sharp) and his sex-obsessed, developmentally delayed older brother Shonzi (Phillips). A Duplass brothers production with Melanie Lynskey as Todd’s girlfriend, the film premiered this weekend at SXSW. Before, DP Nathan M. Miller spoke about using The Doors (not the movie!) as a reference point, working with a small crew and integrating VHS into the production.

Miller: Rainbow Time was shot in and around LA, but Linas and I had crossed paths in the Seattle film scene. He knew that I split my time between Seattle and LA, and when he started crewing up, a few people recommended me as well, so it all made sense. Once he sent me the script, I was pleasantly surprised by his handling of the material and his humor, and thought it could be a really interesting project.

Miller: We kept it simple, which was motivated by budget of course, but also very much creative. It was a great story that had compelling characters. I just needed to make sure it translated well onto the screen. This was a story about relationships that didn’t require any fancy camerawork.

Miller: Linas and I talked about Tree of Life. And The Doors — the band, not the film.

Miller: We did a lot with very, very little. We had a fantastic crew, who really came through on this one. Everyone was taking on several jobs — I’m really proud of our cast and crew. All good people. I think at day’s end there were typically less than 10 people on set, doing the job of 30.

Miller: We used the Canon C300 & C100 mkII w/ EF lenses. This was originally motivated by what was available to us, but I think the look of Canon cameras and lenses ended up being a perfect match for the story Linas was trying to tell.

Miller: Minimalist. Naturalistic. Just accentuating what’s already there. Except for the dream sequence …. we got a little funky with that one.

Miller: That might be our VHS sequences, as we were committed to using true VHS camcorders. Figuring out that process with limited time and means was an interesting hurdle.

Miller: As far as looks, on the day we just dealt with the built-in Canon LUT, keeping an eye on the C-Log to know what we had. The final look was realized in the DI. Nothing fancy.