SXSW: Asperger’s Are Us Director/DP Alex Lehmann on Being “In It for the Story” 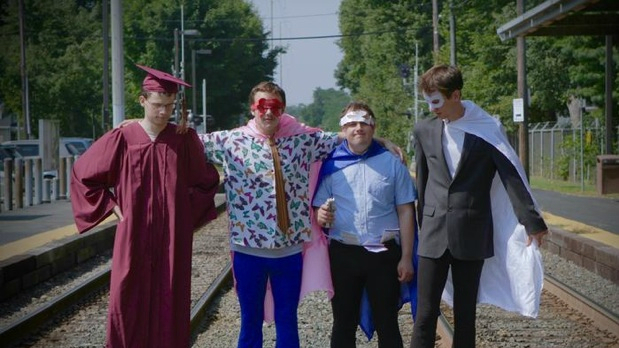 DP Alex Lehmann leaps to the director’s chair with Asperger’s Are Us, a documentary about an unusual comedy troupe. With one of its members soon leaving Boston to study abroad, the improv group consisting of four young men on the spectrum prepares for what may be its final performance. Executive produced by the Duplass brothers, the documentary was quickly purchased by Netflix for worldwide distribution. Ahead of Asperger’s Are Us‘s premiere at SXSW, Lehmann discussed acting as his own DP, scrounging for enough cameras to film the climax and following the story.

Lehmann: I shot the movie because the director/producer (also me) was too cheap to hire a DP (or a sound guy, or anyone else for quite a while). Also because I’m a DP by trade and figured this is the one job going into this I know I can handle. Also, I’d like to share credit with Boston-based DP Andrew Whittaker, who shot some beautiful train footage, and Steven Paul, who came out to DP the epilogue with me 18 months after it all started. Both very talented guys and DPs I’d hire to shoot my next doc.

Lehmann: I rarely thought about the cinematography, mostly because everything else I was doing was much less instinctive. I just kept thinking “follow the story and get good sound”; DP Alex was on autopilot. Later on I shot some B-roll to help the story move along.

Lehmann: Nope. I really was in this for the story.

Lehmann: I mainly shot on the Sony Ex-1. It was affordable and a workhouse in the field. Also, it was very small, which meant I could go incognito shooting on trains, in malls, or just becoming invisible to the doc subject. B-roll was mostly shot on the Sony A7s. Once again, tiny, incognito, also a great low-light camera.

Lehmann: The doc’s climax was the troupe’s big farewell show at a theatre in Cambridge. I needed a bunch of cameras to cover the show, what was going on backstage and the audience reactions. I also had no money. I ended up getting hooked up with some talented film students who owned DSLRs. Getting them involved gave me enough coverage to edit the big finale.

Lehmann: We shot with a pretty standard baked in look but our colorist George Koran helped give the doc a clean, attractive look.