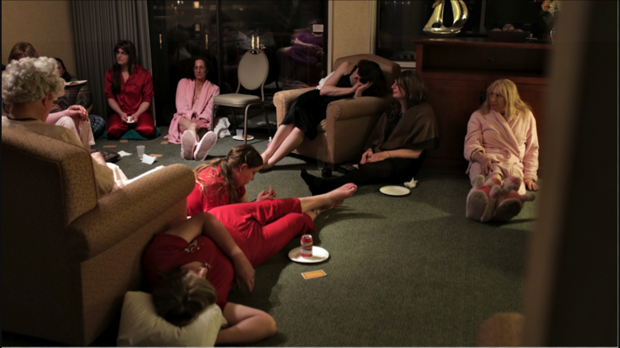 It was a very good year for True/False, but I’ll save the taking-fest-temperature overview for our next print issue. In starting to sort through this year’s films, therefore, I need some kind of arbitrary framework that will provide the illusion of meaningfully segueing from one work to another. In this dispatch, I’ll be focusing on the thorny subject of what happens when documentaries do — or antagonistically don’t — try to serve as compassionate ambassadors to the world on behalf of their subjects.

Christopher LaMarca and Jessica Dimmock’s The Pearl is a nighttime movie, all quiet, warmly illuminated interior spaces populated by a self-supporting community. I’m exaggerating a bit — it’s not a movie actually literally set only in the dark (like Nikolaus Geyrhalter’s Abendland) — but The Pearl, subjectively, is a bit of a safe space. That fits and supports the subjects: four middle-aged trans women, one of whom runs a communal living space out of a spare bedroom (“Amy’s Outhouse”), all of whom need time and low-key support.

While The Pearl‘s narrative includes transitional arcs for all its characters, much of the conflict and difficulty of transition is discussed but not shown. Nina, formerly Reinhardt, is shown returning to her wife after time away, changing into masculine attire in the car before driving home (“Back to Clark Kent,” she cracks); her spouse is never shown, even though Nina conceals her gender identity from a partner of 40 years she fears would be unjustly hurt. Any scenes of friction with the outside world have similarly been (almost) completely excised.

Refusing to give ear to transphobic voices, The Pearl thus normalizes its subjects’ everyday lives. Discussions between the women re: sexual ideology and what it means to present yourself as “feminine” can be prickly — in voiceover, one questions what she characterizes as another woman’s yoking of feminine identity to stereotypical housewife status — but are still conducted within a realm of unambiguous solidarity. If seen, contact with the outside world goes well (Nina’s first trip to Victoria’s Secret lends uncharacteristic joy to the lingerie franchise) or is only discussed. This is a conscious choice which helps plug viewers into a quieter realm of identification. What stayed with me the most was the film’s capturing of specific spaces: Amy’s golden-lit house at night, an fluorescently underlit pizza parlor where Nina works, the perpetually illuminated garage where two trans siblings worked alongside each other for years, unaware they shared the same status. Floating from location to location without definitively marking the passage of time, The Pearl floats from liminal space to space — a fitting match for its subjects.

“What’s the deal with that guy?” someone asked me, puzzled after watching Roberto Minervini’s The Other Side. To give a quick answer, I turned to my interview with the director from last year. Explaining his intentions for this portrait of down-and-out life in the left-for-dead community of West Monroe, Louisiana — the first half profiles dispossessed heroin addicts Mark Kelley and Lisa Allen, the second breaks off to follow a militia during training — the Italian-born Minervini emphasized compassionate identification with subjects whose behavior spirals from merely disturbing to the outright terrifying. “I’ve already approached the topics of pain and fear, and I needed to dig into the sociopolitical causes of it,” he said. “It was time for me as an American filmmaker, living and working in America, to look for the responsibility at an institutional level. The fact that people need to find a shield in violence and drugs, behind weapons — no matter if they are syringes, AR-15s or assault rifles — the fact that people feel the need to protect themselves in America is something that’s not only anachronistic but it’s brutal.”

Some fairly obvious answers about economic stratification, institutionalized venality et al. suggest themselves, none of which are explicitly fingered. These are bands of outsiders intensely loyal to family and friends, convinced the [insert Tarantino’s favorite epithet] in the White House is responsible for their lot in life; such casual racism regularly punctures Mark’s otherwise genial surface. Acutely aware of who he is, cracking wise about his narcotic habits, Mark looks out for relations even broker than he is, even if the most he can do is hook up his sister with heroin for free. One scene raises the specter of institutional neglect: Mark tells his girlfriend that after his mother dies, he’ll turn himself in for a crime whose three-month sentence he ran out on. Why? So that he can finally get clean, something he simply can’t do otherwise. What kind of society ensures its poorest can only get adequate drug treatment if they offer themselves up for harvesting by the prison-industrial complex?

The militia is headed by veterans convinced it’s only a matter of time before martial law ships us all off to the FEMA concentration camps. (Alex Jones and his ilk bear considerable moral responsibility for poisoning the already-paranoid’s minds with this toxic nonsense, which obscures our bought-and-paid-for legislature’s destructive actions, even though they’re in plain public view.) The sight of angry men with itchy trigger fingers just waiting for a chance to shoot somebody — to defend their family and a very nebulously understood Constitution — is depressingly unsurprising but illuminating in its specifics. Again, they are people who mean well: in one scene, a militia leader correctly diagnoses our foreign policy as a repeated matter of imposing ourselves upon other nations with no regard for the consequences, before making an illogical leap to conspiratorial terrain: if it happens abroad, it’s only a matter of time before it happens at home. When accurately perceiving their government just doesn’t care about them, people can go crazy. The final image — a shot-/blown-up car spray-painted with anti-Obama rhetoric in flames, with somebody whooping “America!” — isn’t subtle, but it’s a real thing that happened and a key starting image for understanding Trump’s Vision, or what he pretends to believe anyway. The film is beautifully shot (by Diego Suarez-Llanos) and richly experiential, and more shattering for both those traits.

I enjoyed a lot about Chelsea McMullan Michael Shannon Michael Shannon John, which nonetheless left me deeply puzzled. McMullan was asked by her friend Shannon Hamner to make a documentary about an unusual situation. Hamner’s father John bounced out when she was six, fleeing Hamilton, Ontario for Thailand after a drug deal gone wrong; once there and remarried, he named his new children Michael and Shannon, just like his Toronto brood. Facebook brought the unlikely half-siblings together, and McMullan captures their individual stories in straight-to-camera interviews before the name-only-doppelgangers meet. (She got very, very lucky that the siblings share their names with a currently cultishly beloved actor.)

In the opening segment, Canada is presented as the site of endless-winter anti-glory; slowly dissolving from a frozen lake to Thailand’s warm waves, McMullan elegantly shifts settings. She constantly foregrounds her intervention and active staging of the Canadian siblings’ journey to learn more about their father’s ex-pat life; before the Thai brother and sister on the soundtrack walk out onto the street to meet their siblings, they’re heard on the soundtrack confirming they’re not needed yet (the camera angles are being checked). Michael Shannon concludes in the Philippines, with Canadian Shannon forging on without her brother to learn more about her father’s violent death. Canadian Michael has bounced out at this point, saying he simply doesn’t want or need to know that much more.

I’m kind of with him. It seems to me that there’s some divergence between what Canadian Shannon wants — a journey of closure — and the reality McMullan records: an awkward journey to learn more details about a situation that’s 80% clear by the time our identification point gets to the Philippines, on a quest that appears to discomfit some of those she interrogates. McMullan dives into street parades and other byways, generally making the journey the destination. I enjoyed the local color deep-dives; among other things, it makes for a fine portrait of Pattaya, dominated by an endless parade of shameless middle-aged and elderly white men taking full, unabashed advantage of local sex workers and bar girls. But ultimately the cathartic film Shannon wants to be in seems irreconcilable with the admirably uncommitted one McMullan’s making, and that friction is never productively addressed.

I’m perhaps exaggerating the stance Andreas Horvath takes towards the star of Helmut Berger, Actor. One of Luchino Visconti’s muses (and his partner up until the latter’s death), Berger lives in a hell of his own making. Decades past his ’70s prime (he claims to have had sex four times daily — “only threesomes”), withered by years of alcohol and drug abuse, and long past his financial peak, Berger largely confines himself to his apartment, where he sits in sub-late-Visconti decadence among old photos of his glamorous life; maid Viola Techt complains that he has to stop being haunted by the specter of Romy Schneider.

I don’t know if Horvath had any hope that his subject would sit and tell stories about his glamorous past, perhaps for something along the lines of the genial Marcello Mastroianni: I Remember. “My life has been very salty,” Berger says in one of his occasional forays into heavily-accented English, spelling out the word in case his pronunciation mangles it (“S-A-L-T-Y”). But the subject repeatedly refuses to make with the anecdotes, instead actively antagonizing the documentarian and mostly refusing to be illuminating about his past while chain-smoking and nursing his beers. “I had been warned” Berger could be difficult, Horvath says in a press kit interview, so it’s not like he didn’t know what he was in for.

Personally, if I’d been Horvath, about the time Berger tried to swat the camera out of my hand and then sic the Parisian police on me for harassment, I probably would’ve contemplated calling the insurance company and seeing if the project could be scrapped. Horvath’s made of stronger stuff, with the patience to sit and bicker with Berger for hours. The film’s literally masturbatory conclusion has drawn a lot of attention, but Helmut Berger‘s mostly a matter of well-filmed stagnation, hours in the mire of late-period depression with a fallen star. In the first half, Horvath repeatedly alternates between solo sessions with Berger and Viola, who has no illusions about her employer’s sad state. Because Horvath stays behind the camera and company is absent, it’s often a case of isolated shot and counter-shot; there is literally no one else in the space Berger occupies, with everyone exiled to the other side or their own scenes. It’s admirably embedded, but a slog to sit through, with the purgatorially cyclical dynamics of a heightened homosocial version of “The Lockhorns.” I can totally see why someone (notably John Waters) might love this luridly self-exposing, consciously melodramatic portrait; myself, I thought of the end of Bertrand Bonello’s Saint Laurent, where Berger (as the designer) watches himself young and beautiful in Visconti’s The Damned, an eloquently compact portrait of dissolution over time as effective as anything attenuated here.