Styling the Comedic Horror Film Another Evil like My Dinner with Andre: DP Drew Bienemann 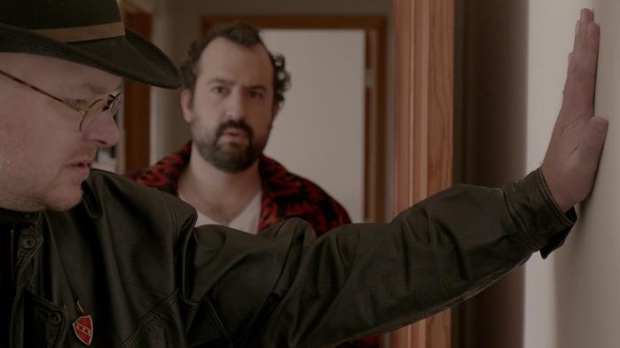 For his feature debut Another Evil, writer/animator Carson D. Mell tackles the risky horror-comedy genre. A husband and wife discover that their vacation home may be populated by malign spirits, bringing in two separate exorcists to deal with the problem. Comedy is courtesy of a cast of familiar TV presences (including Togetherness‘ Steve Zissis and Veep‘s Dan Bakkedahl), horror courtesy of the tone established by Mell and DP Drew Bienemann. Prior to the film’s SXSW premiere, Bienemann talked about being guided style-wise by My Dinner with Andre, getting a recommendation for the job from Jody Lee Lipes and the importance of shooting on an Alexa.

Bienemann: I was shooting a short film the year before with the same production company (Memory), and Carson (the director) had a small cameo in it. He got to hang out on set and I guess he liked how easy going I was while working. When it came time for him to crew up for his feature he had originally wanted his friend Jody Lee Lipes to shoot it, but when they couldn’t make it work with their schedules the producers recommended he think about bringing me on. I guess he showed my work to Jody, who gave his stamp of approval, which is extremely flattering.

Bienemann: The film is pretty unique in that it is both a comedy but also has some very dark, paranormal elements. It was important to me to have the visual language of the film evolve with the story. Our first two acts were shot on sticks or dolly and often on the longest lens we could manage within our locations. When our antagonist is introduced I tried to play up the distance between him and our protagonist with our lensing and compositions. Act three is where all hell breaks loose, which is where the movie became handheld and we also shot everything between 20-35mm, which I felt gave a pretty unsettling feel, especially in close ups.

Our lighting and palette also evolved throughout the film. In the beginning we tried to keep our exteriors a little warmer and our nighttime interiors a little warm and comforting. As the relationship between our two characters becomes strained the day light scenes become colder, and by act three the night interiors are very, very warm.

Bienemann: A big reference that Carson wanted me to look at was My Dinner With Andre. Every time I was thinking of trying to combine coverage or I suggested some kind of oner, he always brought us back to a simple coverage setup.

He had our leads trying different deliveries and different lines as we went, so it was important to him to be able to cut the scene how he felt it worked best.

I’m most drawn to really natural light. All of my photography and my favorite photographers focus on the everyday, and more on the emotion of an image than the technical aspects, so for me I was looking at a lot of Eggleston and Joel Meyerowitz, but I don’t know how much of that actually translated into the final film and how much was just in my head as we shot.

Bienemann: This was definitely one of the most challenging shoots for me. Every production I’ve been on doesn’t have enough time, and this was certainly part of what made this tough. We only had 18 days to shoot it all.

Another major challenge for us was the location. Carson was smart to write the majority of the film to take place at his father’s actual vacation home in the mountains, but the house itself wasn’t ideal. Lots of the spaces were small to begin with, and once I brought in two Alexas you were really stuck.

With the rushed schedule and our minimal grip and lighting package it was tough to really dial a lot in, so we would often work in broad strokes at the top of a scene and tweak between takes.

Bienemann: We shot on two Alexas. For me shooting Alexa was the only thing I was really adamant about. I knew our budget was super tight, but my rental house (On The Mark Media) graciously made it all work.

Our lenses were Arri Alura zooms. We swapped between the 15.5-45mm and the 30-80mm on A-cam, and we had the 18-80mm on B-cam. We mostly used them as variable primes, which really saved time and stress with our minimal crew and full schedules.

Bienemann: I come from the music video world of small crews and rushed days, so more often than not I’m tempted to leave things as I find them and work some negative or bounce in as needed. Our gaffer, Jesse Sperling, really pushed me to try more.

I would usually watch a blocking and just want to just turn on all of the lamps in the room and get shooting, but he would always be ready with a China ball or some rigged lamp that would sweeten whatever we were shooting.

After the first few days I became more comfortable with sacrificing a few extra minutes to let him implement whatever he was thinking. In the DI I would be thinking “Why does this scene look so nice? Oh yeah, it’s because that’s where Jesse had time to do his thing.”

Bienemann: For me the hardest scene is the last scene of act two. Both of the leads have an argument that has a lot of emotional beats and power shifts. The blocking also takes them all over the main floor of the house.

I had gone through the whole scene in my script and made notes about where I might want an angle change or to jump the line, but once I saw the blocking I knew I was going to need some time to figure it out. It was one of the rare occasions where I actually took out paper and drew an overhead of the whole scene.

Something I started doing a couple years ago to help me keep eye lines and shots straight in my head was to take a photo off of the monitor of each setup on my phone as we went so that I could quickly double check that I was on track. In the end it worked out.

When you go into your first feature you know that you’re not going to succeed at everything you’re trying to pull off, but when I watch that scene I’m thrilled that we managed to make it all cut together. Small victories, haha.

Bienemann: I tried to get as close to a final image as I could while we shot, but you always run out of time and end up crossing your fingers that you have enough shadow information or that you can bring down that hot window or whatever.

A lot of the broad ideas were there, but we definitely had some work to do in the DI. Even though we had scheduled five days for the DI, we only used three, which is partly because we got close to where we wanted to be on set, and partly because our colorist Al was so in tune with what we were going for.

Working at The Lodge at Fotokem was a great experience. It’s great to be able to just sit on a couch and spend time focusing on one thing. It’s the opposite of being on set.