“Time, and How to Manage It”: Miss Stevens DP Sebastian Winterø 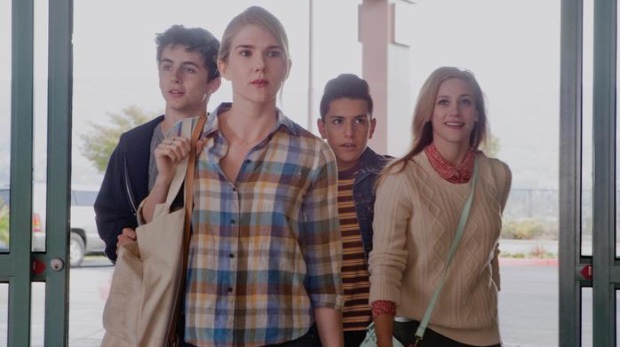 Building on eight years of pedagogical experience, Julia Hart’s debut feature Miss Stevens tracks a troubled teacher (Lily Rabe) and three of her high school students as they attend a statewide acting competition. Victory means possibly forestalling the closing of their cash-strapped school’s fine arts division, but Hart focuses equally on the complicated relationship between the teacher and her charges. Here, DP Sebastian Winterø (who recently shot Sia’s “Umbrella” video) discusses the importance of making sure the director has enough time, being fascinated by California’s light as a European, and how much work should be done for the DI.

Winterø: I read the script and met with the director/producer very shortly before they were meant to go into production, and I remember being drawn to the script because of its loyalty to the characters. There was a certain warmth, a certain affection for each and every one of characters in the story, and that’s also what I eventually tend to be gravitate towards — the sense that the characters and story is coming from something genuine, something truthful. I was thrilled to find out that Julia and [co-writer] Jordan [Horowitz] shared that focus.

Winterø: I like it when a film or story wants to engage also by tone of voice and use of language. The story itself might be interesting enough, and it usually is, but I really like it when the sound of the narrator also becomes apparent and exposes a choice from time to time. To me, the mere sound of that voice can be just as haunting as the story itself. And that eventually resembles the way I see cinematography:

I try to picture myself in those rooms and understand the situations and scenes. What would I do if I was uncomfortable or thrilled or excited or ashamed, like they are? What would that feel like, and how can I make that feeling unique and relatable so that the people will see and understand and feel that feeling? Is there a certain solitude to a specific frame, or an unease from a specific angle? How can I support this specific peak or beat in the story without making too much noise? I don’t want the audience to be looking at the images for the sake of being images, instead I would rather attempt to create images that can be viewed as effortlessly as hearing words being spoken, but bearing same great impact.

Filmmaker: What were the biggest challenges posed by production to those goals

Winterø: Time. Always time, and how to manage it. The balancing of technical ambitions should in my opinion always be dictated by a concern and care for the needs and comfort zone of the director. A movie doesn’t hinge on cinematography, it hinges on performances, the presence of the characters, and eventually on our ability to engage the audience on an emotional level. For that, I would always want to create an environment where the director has time to reflect and room to move. To let her or his gut instincts and intuitions guide them, and make sure that process is uninterrupted as much as possible.

That being said, what fascinates me in my own department, and the whole reason I became a DP, is to explore that area of emotional contact between audience and screen. How do we, as humans, connect to each other on an emotional level? How do we behave, what are our codes and morals, and what are the ways to visualize that? How can I eventually shoot what something feels like, as opposed to just what it looks like?

Winterø: Alexa XT and Zeiss Superspeeds, which really is a go-to combination for me. Alexa, because I still feel it renders colors and light and skin tone in a way that resembles a film-like medium. I am not saying that everything should look like film. Alexa is not a film camera, and the whole idea of negotiating it to be one doesn’t make sense to me. It has a different set of qualities, but I like to keep the mindset and approach from film — that the image is something you explore and refine, using your eyes, more than user menus. To me, Alexa renders images in the most truthful and effortless way, loyal to reality, and that’s what matters most to me.

Winterø: The approach to lighting kind of ties in with the my general approach and views on filmmaking. I was always fascinated with natural light, and the way it travels and behaves throughout day and night. Especially coming from Europe, the light in California  — where the sun is almost always out and the sky is always visible, constantly affecting its surroundings, altering the mood — is really interesting to me. Even though our approach was leaning towards the natural and available, we still had some scenes, where we knew we wanted specific light conditions, or wanted to manipulate the environment — like the final scene, shot towards the end of day, with saturated hues of warm sunlight and cooler, softer shadows. Or the applause moment at the medal ceremony, where Miss Stevens finds herself a little uncomfortable, and surrounded by cell phone flashes. Both are examples of the visual language trying to support or comment something that happens in the scene. A character’s state of mind, that we can visualise, eventually invite the viewer to relate to, on a different level.

Winterø: The end scene in the parking lot was a challenge, but more from a planning point of view, because it was multiple characters and action, and three to four pages of dialogue that we wanted to set in a late afternoon/evening setting. The window of great light/mood is not long enough to produce that whole scene, so the cheats and shortcuts had to be auditioned beforehand. Making sure we would get the entire scene looking consistent, and all in that saturated and slightly vibrant and heightened mood of light inherent to that direct, low sun at the end of a day. We rehearsed every camera position during the afternoon, to eliminate as many surprises as possible and make sure that we dedicated
the maximum amount of shooting time to performance and reflection, as opposed to technical and logistical stuff.

Winterø: I like to achieve as much of the final look as possible on the day, rather than relying too much on postproduction down the road, mainly because I like to be able to react and relate to the image on the day, and also offer that option to the director. I prefer for us to be able to look at the image and gauge to it, emotionally. Is it supporting the story? Is it loyal to the realm of our world? Is it the right image for this particular moment in the life of this characters? I prefer not to postpone potential reflections, I think there is a certain benefit, having those discussions openly on set, as it happens, when we are all there. It shouldn’t be postponed or left for a dark room many months later.
That being said, I am totally open to getting smarter down the road, and also to the ability of leaving certain flaws uncorrected during the shoot, because I know it will be faster to fix it in the DI process than on the actual shooting day.