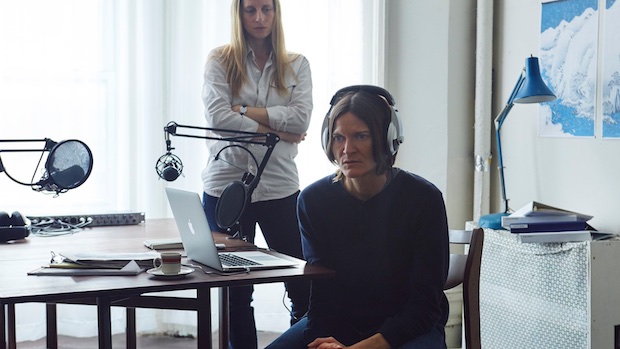 After creating, directing and starring in two acclaimed web series — The Slope, a collaboration with Desiree Akhavan, and From F to 7th — Ingrid Jungermann makes her feature debut with the Tribeca Film Festival selection Women Who Kill. It’s a zeitgeist-y murder mystery set in the world of true-crime podcasts, but, like all of Jungermann’s work, it’s also a relationship story drawing inspiration from her own life. Below, Jungermann, one of Filmmaker‘s 25 New Faces, talks about her favorite ’80s serial killer books and movies, why working in genre allows her to be more personal, and now “Serial” inspired the film.

Filmmaker: This is your first feature, but you’ve directed hours of web series. As a filmmaker, what’s been the biggest difference for you in working between the two forms? Did anything surprise you about the process of making a film versus a web series?

Jungermann: I grew up playing tennis. I always come back to my experience as an athlete when it comes to creating. And web series and features are simply different opponents. With web series, you just hit as hard as you can. Forget rallies and strategy. It’s more energetic, less precious. With feature filmmaking, you are playing against someone who always gets the goddamned ball back. So you have to adjust to that. Even if it’s not your style, if you want to have a chance, you just have to get the ball back, too.

Did anything surprise me? It’s always a surprise I want to do this again.

Jungermann: I knew about Aileen Wuornos because it took place in Florida, where I’m from. And of course, Monster and the documentaries that followed. I found myself really upset by her story, because she’s just another statistic in a long list of women we’ve failed. She never had a chance. Another story that deeply affected me was that of Myra Hindley and Ian Brady. Myra helped Ian rape and torture girls because she thought that was love. Or something. How does a woman get to that place?

I read (or tried to; they were deeply disturbing) a couple of non-fiction books specifically about female serial killers. There was also a really interesting article by Marissa Harrison, a professor at Penn State. She compares the profiles of male versus female serial killers as it pertains to methods and motives. It was a helpful read because she gets into the psychology of the female murderer, which helped with the backstory of a couple of my characters.

Filmmaker: The lover who may or may not be a killer is a classic genre storyline, whether it’s in stories by Patricia Highsmith or in ’90s movies like Basic Instinct. What were some of your filmic or literary references?

Jungermann: As a kid, I grew up watching true crime TV movies and mini series. I’d watch them over and over again. Small Sacrifices was a family favorite. Mark Harmon as Ted Bundy in Deliberate Stranger was another. Fatal Vision. Perhaps because my mom was deeply worried about us being stolen, I swear to god we must have watched Without A Trace a dozen times. So true crime — especially from the ’80s — is for better or worse, part of my unconscious brain.

Beyond that I had a list of about 50 reference films I watched to help shape my style and tone. Of course Woody Allen and the Coen brothers films were on it. Blood Simple became one of my main references. Claude Chabrol really spoke to me. His humor is so strange and mysterious. I took some stuff from The Butcher. And The Grifters helped me clarify my ending.

Dorothy Parker’s poetry was also a reference. Her wickedness and playful cynicism has always influenced me. She knows how to have a good time while pointing out that the world can be a very dark place.

Filmmaker: Your previous work has had a strong autobiographical component. You again star in this film. To what degree is Women Who Kill a personal film?

Jungermann: I’m not interested in making personal films that don’t invite people into the experience. Which is why I’m drawn to comedy and genre. It allows you the chance to expose yourself while still thinking about the audience. I want them to have a good time. Or at least an interesting one.

That said, this movie is deeply personal to me. I’ve had many relationships. After my last one ended, I wondered if I would ever be able to make one last for more than a couple of years. What was I doing wrong? Why did it seem most people I knew could make this long-term stuff work and here I was, back to square one? So I needed to pick that apart and think about my issues with vulnerability and intimacy. What was I so scared of? I took all that internal conflict and made it the heart of the film — what does it mean when you allow fear to make decisions for you?

Filmmaker: Finally, with “Serial” and Reddit forums devoted to every crime, amateur true crime journalism is a phenomenon. Were there references out there in the world of the female podcasters who are at the heart of your story? What research did you do into this world, and are there journalists, podcasts or shows who made an impact on you?

Jungermann: “Serial” was my main squeeze. My characters started out as grad students. That was boring. Then they were writing a book. That was dumb. Someone suggested to me they should do something more visual. But the last thing I wanted to do was make them documentary filmmakers. I can’t stand movies about filmmakers. Around that time, I was totally obsessed with “Serial” like everyone else on the planet, so I thought — oh, this is it. This is what they do. And while it’s not visual, it’s also not just on a page. It’s active. Since then I’ve listened to more shows — Radiolab, Mystery Show, Stuff You Missed in History Class, but there is so much more out there. I decided to make my movie about relationships, not podcasting, but there is a whole movie waiting to be made about that world.