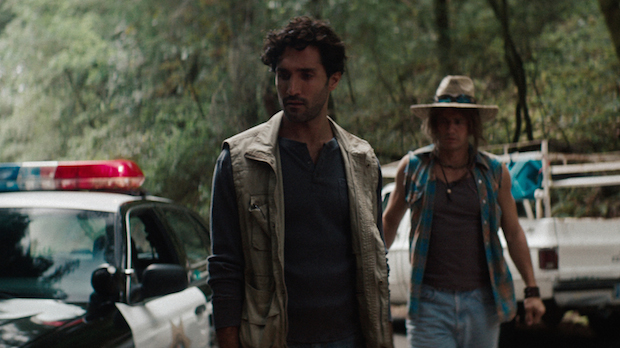 by Soheil Rezayazdi
in Directors, Interviews
on Dec 9, 2016

Every city has a learning curve. In Burn Country, opening today from Samuel Goldwyn, an exiled Afghan writer (Dominic Rains) arrives in rural California eager to immerse himself in the culture and customs of an American town. He befriends an unbalanced local (James Franco) in his search to “get to the source of things,” as he describes it, but the outsider soon becomes confronted by a culture he can’t quite comprehend. Burn Country marks Ian Olds’s first foray into fiction filmmaking after a pair of documentaries shot in Iraq and Afghanistan. Below, Olds speaks about the film’s origins, the Northern California landscape and his prior work with James Franco.

Filmmaker: In 2009 you directed Fixer: The Taking of Ajmal Naqshband, a documentary on the kidnapping of a fixer in Afghanistan. What inspired you to tell the story of another fixer as your first fiction feature film?

Olds: The Fixer emerged from the aftermath of my Afghanistan documentary for both personal and political reasons. On a personal level I wasn’t done with the story. The original goal of the documentary project was to investigate the war in Afghanistan by exploring the relationship between an Afghan fixer named Ajmal, his American journalist client and the story they were pursuing. But when Ajmal was kidnapped and murdered while we were back in the states raising money for our next production trip, everything changed. We returned to Afghanistan to find out what happened to our colleague and that, tragically, became the center of the documentary.

It was a painful film to make and as we were finishing it I became involved in the asylum process for another fixer — an Afghan friend of ours who made it safely to Europe. He jumped through all the bureaucratic hoops, was granted asylum and suddenly found himself facing a very different kind of struggle. He was no longer facing the danger of war; he was contending with the quieter existential crisis of a man seeking purpose in exile. I was struck by this existential dilemma and also by the fact that these stories were not being told. There seems to be a pervasive instinct in the West to see Afghan stories through the lens of war trauma. The trauma of war is, of course, real, but after thinking about my own experience in Iraq and Afghanistan and talking to several Afghan friends I kept coming back to one idea. To repeatedly tell the stories of Afghans through the lens of war and its trauma is too reductive. It cheapens humanity and denies the fullness of living. Where is the conflicted inner life and sense of humor? Where is the sexuality? Where is the story of a character, who happens to be Afghan, striving for a kind of transcendence?

This is where my writing partner Paul Felten and I began, but in order to create a film that moved beyond these issues we knew we needed to let the story develop in ways that truly surprised us. We wanted to find a vivid, dramatically compelling narrative with an Afghan journalist at its center that allowed us to create something we hadn’t seen before. Over time this led us to our story set amidst a very particular aspect of bohemian Northern California.

Filmmaker: Osman’s story is in many ways a classic immigrant narrative. He arrives at a new place and struggles to understand the culture and adapt. How did you work to become comfortable in telling the story of a Middle Eastern man’s culture shock in the United States?

Olds: I don’t think good work comes out of writing from a place of “comfort.” Once this story and this character had taken hold of us it simply became our job to navigate the terrain in as deeply human a way possible. For us this meant writing a complex character striving to become the fullest expression of himself as opposed to a character who was simply a victim of history. One thing we realized early on was that we had an opportunity to invert a familiar dynamic – instead of making a film about a foreign land seen through the eyes of a Western journalist, we wanted to make a film about an Afghan journalist reporting on America. Our main character Osman doesn’t find himself in a place where people are overtly prejudiced, but they fetishize him a little bit. They want to make sure he’s okay, or to challenge him based on how they think his experience may have hardened him. Their version of “sensitivity” assumes a lot about his history, but he just wants to be here with a fresh slate — to be as present as possible, to get a bead on them. This reversal of the familiar journalist dynamic also informed the relationship between Osman and the unstable hot tub craftsmen played by James Franco. The Franco character essentially becomes Osman’s fixer in the film, his point of access into the dangerous undercurrent that runs below the surface of our small town.

The other key to telling this story was to place a great deal of trust in our lead actor, Dominic Rains. He’s a wonderful actor who was able to bring a deep family history to the character of Osman. For me that was crucial. To have Dom take such a clear ownership of the character while maintaining the flexibility to explore and play as an actor allowed us both to go deeper into the work. He brought himself so fully to this role that I felt humbled by his honesty.

It’s interesting: although we never thought about this film as a classic immigrant narrative, I think that aspect of the story resonates with even more power today than when we wrote the script a few years ago. Both because of world events like the Syrian refugee crisis, and because of the current anti-immigrant, anti-Muslim strain in American politics that seeks to reduce complex human beings to dangerous cliches.

Filmmaker: Nature plays a key role in the film — the ocean, the woods. What do you think the natural elements mean to the characters in Burn Country?

Olds: I think there is an impenetrability to nature that is important to the film. It’s also a key aspect of the contradictions of this part of California (which happens to be where I grew up). On the one hand there is a remarkable raw beauty to the place that evokes endless possibility. It is the embodiment of  very particular version of the California American dream where you can make your own destiny at the edge of the world. But on the other hand, there are some people going seriously to seed deep in the shade of those redwood trees… Growing up there I was always struck by this tension between possibility and a darker undercurrent of danger, some of it real and some of it imagined.

There is also clearly a connection between a particular landscape and a person’s sense of home. So for Osman, living in a form of exile, the way he experiences the natural world in California versus what we see of Afghanistan becomes an important aspect of the film.

Filmmaker: You worked previously before with James Franco on the experimental documentary Francophrenia. How did you get him on board for this role, which is pretty unlike anything we’ve seen him do in the past?

Olds: I collaborated with James on Francophrenia and I also edited several of his films so we had a strong working relationship. But after seeing his work in Spring Breakers I had a brand new sense of his range and reached out to him about playing Lindsay. I was looking for someone inherently charismatic who could play this heightened but damaged character — someone who could ground the character’s behavior in genuine human pain. I was convinced James was perfect for the role and happily he agreed to take it on.

It was also a huge advantage that I had edited his performances before. You learn a lot about an actor in the edit room and I knew James was often at his best as an actor when he was having fun in a role and able to let loose. That also factored into our decision to transform him physically. I wanted to create a larger than life character — someone who might have been the center of attention in high school but then never left his small town. Things that work in high school don’t work forever… I suspect James and I both knew people like this and I could tell he had a good time bringing this guy to life.

Filmmaker: The film seems preoccupied with a sense of place. Cinematically, how did you strive to give rural California a distinctive look and feel, both for the viewer and for Osman, the outsider?

Olds: I think that preoccupation comes from the inversion I mentioned earlier where, in part, the film is about an Afghan journalist reporting on a specific corner of America. From a filmmaking standpoint there were a couple key aspects to our approach. First, I had a great collaboration with the immensely talented DP, Adam Newport-Berra. Together we came up with a visual approach that moved between strongly designed cinematic gestures and moments where raw performance took control of the camera. We intentionally used very few establishing shots and instead relied on a dynamic camera to reveal the world as Osman moved through it. We also worked to degrade the image in order to shift the film outside the overly clean Alexa look so common in movies today.

It was important to me to let the wild messiness of the world impinge on Osman and the audience. I’ve always been suspect of films that are overly sanitized and hermetically sealed. We wanted to create the sense that life exists beyond the edges of the frame — that something specific was going on well before we arrived in a scene and will continue long after. This is a crucial aspect of the writing Paul and I do together and something that’s always on my mind when I’m directing. The results can be disorienting and invigorating in a way that excites me, but the ultimate goal is to create a vibrant, compelling story that exists within a unique, lived-in world.

The other crucial part of all this is of course sound design. I wanted to place Osman and the audience in a heightened world that existed just outside the bounds of naturalistic cinema. So we played a lot with how to bring the natural world alive with sound and how to warp that sound at times in order to draw the audience deeper into this imagined space. I work a lot with sound as I edit because it informs the image to such a powerful degree. I love the way sound can shape the meaning of an image, or of a scene, or of a film for that matter. For us it became an essential tool that allowed us to draw the audience deeper into Osman’s journey.

Note: This piece was originally published during the Tribeca Film Festival, where the film was titled The Fixer. It is being reposted today with the title changed to its new title, Burn Country.