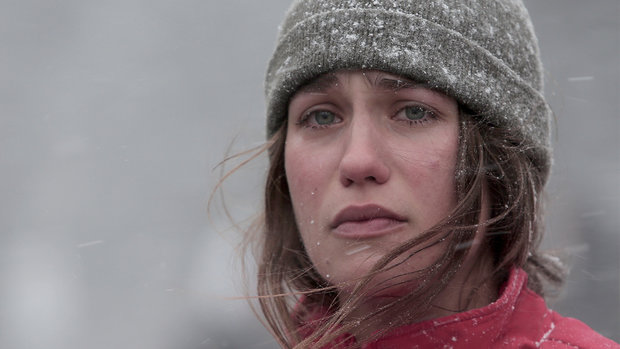 The below article was originally published during last year’s Tribeca and is being reposted today timed to AWOL‘s release on digital platforms (iTunes, Amazon, Google Play, etc.) and preceding its week-long run at the IFP Made in New York Media Center. Tickets are available here.

The love story of Deb Shoval’s AWOL plays out against the backdrop of a depressed coal town in Pennsylvania. The protagonist is Joey (Lola Kirke), a plucky 19-year-old who sees the Army as the only way out of town until she falls for Rayna (Breeda Wool), a married mother of two who can’t afford to leave her trucker husband.

The project started out as a short which Shoval shot in her hometown of Wilkes-Barre, Pennsylvania while she was an MFA student at Columbia in 2010. After it premiered at Sundance in 2011, where it won awards from Kodak, Technicolor, and Women in Film, Shoval decided to expand the short into a feature.

To raise money for the feature, Shoval turned to Indiegogo and also got financial support from the Jerome Foundation, Frameline, the IWC/Tribeca Film Institute “For the Love of Cinema” Award and the Tiffany’s Women in Film Finishing Fund. The film was also financed through loans, equity investors and in-kind services.

AWOL premieres April 15 at the 2016 Tribeca Film Festival. Below, Shoval answers questions about how she made the transition from short to feature and what inspired the original tale.

Filmmaker: I know the film started out as a short. Did you always envision it as a feature? Or did you decide to expand it once it received such a positive reception? How did that process work?

Deb Shoval: AWOL the short film was a very small project shot in 2010 over three days during a January blizzard in and around my hometown of Wilkes-Barre, Pennsylvania. I was an MFA student at Columbia at the time, and I was very much aware that I kept making these little movies that were aesthetically beautiful but didn’t really hold up story-wise. AWOL was an experiment with explicit intentions — to capture a strong sense of place and to tell a story that made sense.

Since September 11, I’ve always been curious about who joins the military in a country like ours, where military service is not mandatory. Are motivations purely financial? Patriotic? And along these lines… who leaves the army, and why?

Filmmaker: Joey is such an original character. It’s rare to see a coming-of-age story about a rural lesbian. How did you find that character?

Shoval: I became fascinated by the story of a young lesbian-identified woman named Skyler James, who had become a sort of a poster child for American soldiers seeking asylum in Canada. I was curious whether Skyler had come to have a critique of militarism that made her morally incapable of completing her service, or whether her life-altering decision was more personal than political.

During my series of Skype calls with Skyler, what moved me most was how young she seemed, how impetuously she both joined and deserted the Army, in contrast to how consequential the decisions actually were on the entire trajectory of her life. I had so much respect for her, this young woman who so boldly wore her heart on her sleeve.

The questions I explored in AWOL the short didn’t begin or end with Skyler James’ story; AWOL’s Joey is a work of fiction. But I very much credit Ms. James for helping me to start exploring questions about the opportunities that young people in this country have – and don’t have – and the choices that get made as a result.

To me, AWOL the short film felt very much like a condensed Act 2 and Act 3 of a feature. It lends itself to questions about an Act 1 — How did Joey and Rayna’s ill-fated love story begin? Why did Joey sign up for the Army? — as well as questions that would inform a more robust Act 2 and Act 3:  Who are the people that influence Joey’s decisions? Rayna’s? What does their mutual version of utopia look like? What if they really do this?

When I got the call from Kim Yutani informing me that AWOL the short would be premiering at Sundance, I was living temporarily in LA as a Film Independent fellow, in development on a feature called Poppies and Olives, which is an Israeli-Palestinian lesbian love story. I intentionally put that project on hold — it is still one I’d love to make — deciding instead to collaborate with novelist Karolina Waclawiak on a screenplay for AWOL the feature.

Filmmaker: I know you took a hiatus during production so that Lola Kirke could appear in Mistress America. How did that affect then final film?

Shoval: We began shooting AWOL in 2012  and completed principal photography in 2015. This is probably pretty rare in Hollywood, but very much part of the reality of ultra-low budget independent filmmaking. You wait for money and then you wait for actors, and in our case, we also waited for the right season. Just as you’ve got two of those things happening, the timing is no longer right for the third.

During hiatuses, the screenplay got better and my leads grew tremendously from all the on-set experiences they were having with more seasoned directors… so I feel like every bit of the hurry up and wait has been a blessing in disguise. And it is amazing, to look back and know that Breeda, Lola, producers Jessica Caldwell and LA Teodosio, Gal Deren our DP, Sam Hawkins our costume designer, Kate Pedatella our assistant editor — all of those folks have been loyal and patient and dedicated to seeing this project through since its inception.

Filmmaker: The sex scenes in the film are very intimate and realistic — not at all sensationalist. How did you approach those scenes and help the two actresses to feel comfortable?

Shoval: Cinematographer Gal Deren and I shotlisted and storyboarded the entire movie before shooting, at least enough to have a general sense of our goals for each scene.  I don’t normally share the shotlist with the actors, but for the scenes that contain nudity, I did.  I wanted the actresses to know exactly where the camera would be and how much of their bodies would be shown.

Filmmaker: You’ve spent years devoted to AWOL. Have you had a chance to think about your next project?

Shoval: Oh, yes. It is an eco-thriller love story.