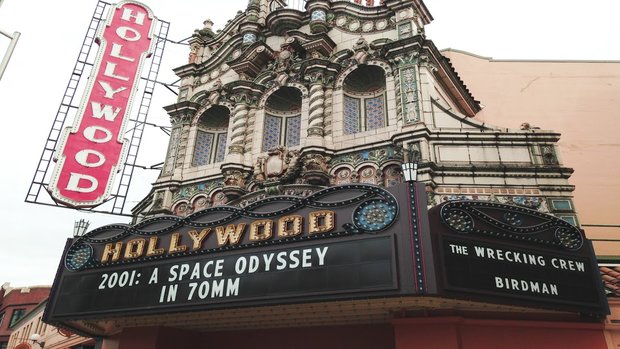 Within the course of one week in late December 2015, the historic Hollywood Theatre in Portland, Oregon made movie news twice. First, the non-profit theatre announced it would open The Hollywood Theatre @PDX, a new airport theatre which will highlight short films telling stories specific to Oregon and the Pacific Northwest. Then, none other than Quentin Tarantino showed up after a screening of The Hateful Eight (in 70mm, of course!) and took part in an impromptu Q&A.

Both instances were indicative of The Hollywood Theatre’s efforts to court cinephiles with innovative programming, community outreach, and 70mm projection.

As film audiences increasingly opt to stay home and stream films, select independent movie theaters such as Alamo Drafthouse and The Hollywood Theatre are catering to hardcore film fans who seek an outstanding cinematic experience.

Of course, when The Hollywood Theatre first opened its doors as a vaudeville and movie theatre in July 1926, it was a very different world. It was the tail end of the silent film era and movie theatres were designed as entertainment palaces. But by 1975, the economic reality compelled the once grand theatre to be divided into three separate auditorium spaces. Though the Theatre was listed in the National Register of Historic Places in 1983, it had lost the lustre of its early days.

In the late ’90s, a non-profit organization formed to purchase the theatre and restore it to its former glory, but it continued to struggle financially. When Doug Whyte took over as Executive Director in 2011, his primary goal, he recently told Filmmaker Magazine, was to turn the theatre back “into the vibrant historic landmark it had been in the past: a movie lover’s mecca!”

At the time, Whyte said, “audiences were slim” and the theatre’s financial future was “bleak.” He knew he had to make it more comfortable and appealing to contemporary audiences by upgrading the seats, restoring both the exterior and the interior of the theatre, and adding beer, wine, and pizza to the concessions.

Whyte’s secondary goal was to “inject the programming with innovation, creativity and collaboration to draw in a larger and younger audience.” To do so, the theatre developed programming partnerships with other organizations and artists in town (Todd Haynes is on the Board of Directors).

Among the regular film series at The Hollywood are The Mississippi Records Music & Film Series (which recently hosted an evening with Guy Maddin), NW Animation Fest, and The Collective Eye Documentary Film Series, among many others. The theatre also runs first-run indie and art house films including, most recently, The Witch and Hello, My Name is Doris. 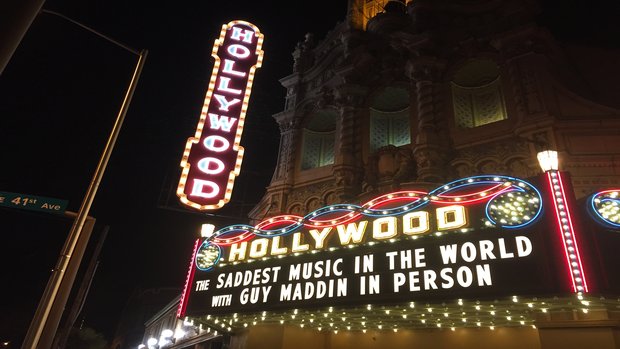 “People still want to go out in the evening, so we never look at Netflix, etc. as competition for us. We have made watching films an ‘event’ again,” said Whyte.

One of The Hollywood Theatre’s greatest assets is Dan Halsted, a film projectionist, film technician, and film collector who was hired as a technical director in 2004 and is now the theatre’s chief programmer. He’s been called the “Indiana Jones of film archivists” because he discovered more than 1,000 reels of Kung fu films in a former movie theater in Vancouver, British Columbia. An avid collector of 35mm films with a special interest in exploitation, horror and grindhouse, Halsted programs the hugely successful Kung Fu Theater series, which screens rare 35mm prints of Hong Kong action films from the ’70s and ’80s (mostly from Halsted’s personal collection), as well as Grindhouse Film Festival.

Returning 70mm projection to the theatre was a personal mission for Halsted. But it was easier said than done.

The original Norelco AA2 projectors were installed in 1959 when the theatre screened its first 70mm film, Solomon and Sheba, a King Vidor film starring Yul Brynner. But when the theater fell on hard times in the 1970s, 1980s, and 1990s, a number of the 70mm parts went missing (including the mag head assemblies from both projectors). Since the parts haven’t been manufactured since the ’60s, it was a huge effort to locate them. As a film collector, Halsted reached out to other film collectors and technicians across the country and also scoured eBay to obtain the missing parts bit by bit.

It was worth the effort, according to Halsted. “I love celluloid,” he said. “I always think that it’s far superior to any digital projection and I also want The Hollywood to be the premiere destination for cinephiles, since it was originally such a grand movie palace,” said Halsted. “It’s the greatest way to see a movie since it is the highest resolution. It’s the best experience you can have in a movie theatre.”

Since the 70mm projector has been back in use, nearly every show has sold out. In addition to The Hateful Eight, so far, they’ve screened 2001: A Space Odyssey, Vertigo and The Wild Bunch in 70mm. 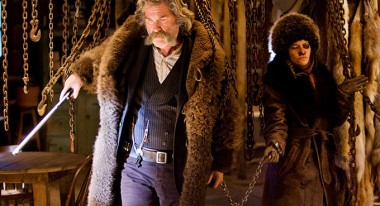 And, it was no coincidence that Tarantino chose to show up at The Hollywood after a screening of The Hateful Eight. “We were able to get The Hateful Eight because we were on Tarantino’s radar because he and I are interested in the same types of movies and we’re both film collectors and we borrow prints from each other,” said Halsted, who added that Tarantino “only went to two theaters [during the Hateful Eight 70mm road show] and we were the first one he went to. He was really impressed with our presentation.”

The Hollywood sold out 60 shows of The Hateful Eight with lines winding around the block for every show for five weeks. “It was phenomenal, far and away the highest grossing movie that’s ever played here,” said Halsted.

On April 22, the theatre will screen Baraka in 70mm as part of the Portland EcoFilm Festival and this summer, to celebrate the theatre’s 90th birthday, they’re planning a 70mm extravaganza. In addition to bringing back 2001: A Space Odyssey, The Hollywood will also screen Lawrence of Arabia, West Side Story and Aliens in 70mm.

“That’s the thing I didn’t expect when we installed 70mm,” said Halsted. “I had no idea people would respond and be so excited about it. I thought when film went away and digital took over, it would take time, maybe 10 years, before people would notice and miss it and think ‘this is something special.’ But it happened right away as soon as digital took over. Far more people come when we’re showing something on film. Everything always sells out on 70mm.”