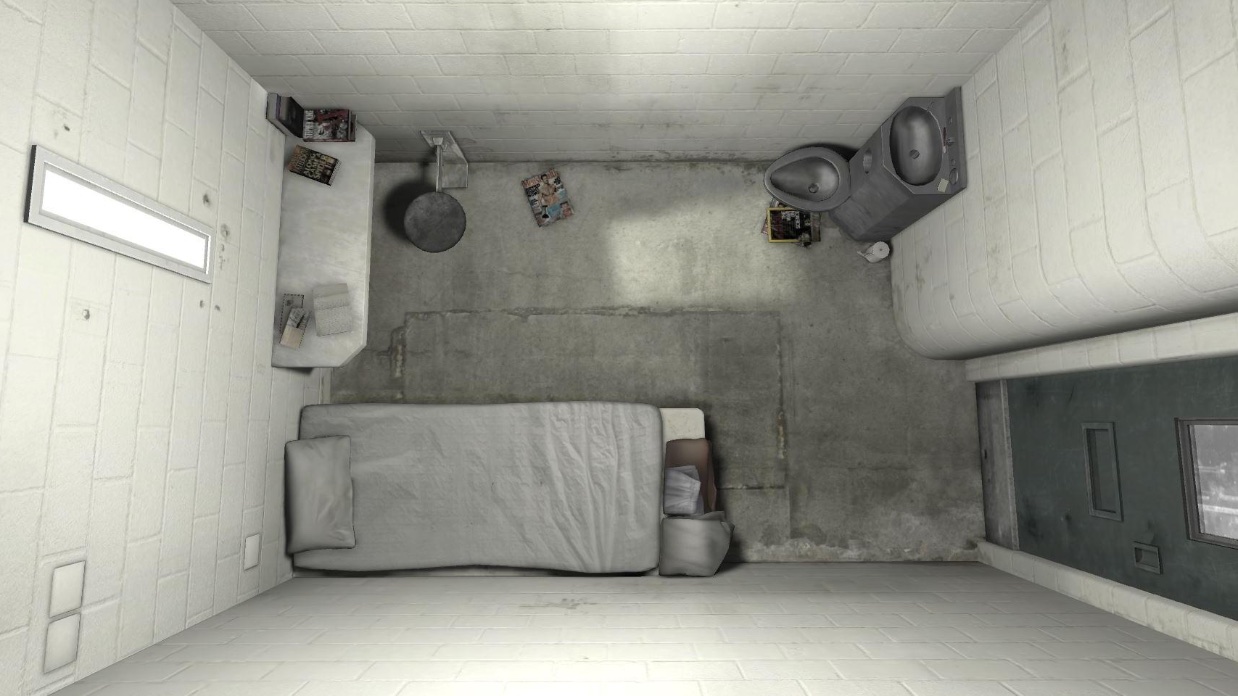 by Scott Macaulay
in Filmmaking, Transmedia
on Apr 29, 2016

One of the most powerful pieces at Tribeca’s Storyscapes program this year was a nine-minute evocation of the experience of solitary confinement produced by The Guardian. Now available for Google Cardboard or simply viewed as a web video on The Guardian‘s site, 6×9, directed by Lindsay Poulton and Francesca Panetta, is both a masterful exploration of VR’s promise as well as a penetrating look at the corrosive psychological effects of solitary confinement. Overused in the American prison system — to say nothing of being simply inhumane — solitary confinement becomes, as 6×9 succinctly demonstrates, a form of torture.

On an artistic level, the piece’s brevity is one of its greatest achievements. The directors, drawing on testimony and interviews with prisoners who survived solitary confinement, have replaced the actual experience of solitary — the mind-numbing, day-to-day sameness — with an evocation of its various psychological states. Viewers strap on the headset and earphones and are dropped into that small, 6×9 cell, with their vantage point shifting as the years go by from the the corner to the bed to, eerily, at one point, a spot high up towards the ceiling. There are didactic sequences, as facts and statistics about solitary appear on the wall, and then moments of sheer experience, ranging from the cacophonous nighttime assault of prisoner voices echoing just outside the door to the hallucinations that develop as the brain struggles to invent forms of human contact.

At Storyscapes I spoke to one of 6×9‘s directors, Francesca Panetta, as well as to Tyrrell Muhammad, who experienced solitary in an upstate New York prison. His initial placement in solitary was due to his missing a prison count. His stay was lengthened for the offense of talking in his cell.

Filmmaker: Francesca, how did you come upon telling a story of solitary confinement by using VR?

Panetta: My job at Guardian is Special Projects Editor, and I’m tasked with looking at different ways of storytelling and innovation. I was really interested in looking at VR because obviously it has huge potential for storytelling. I was thinking about the kinds of topics we’re interested in at The Guardian. Solitary confinement is something we’ve written about for years that we see as an injustice, a human rights abuse. So, for me, [VR and solitary confinement] seemed like really good pairing. It’s all about space, isn’t it?

Filmmaker: Yes, it is. And also time. Something I loved about the piece is that it seems to have thought through the paradox of making a very short piece about a very long situation. But I could imagine another version — one where you’d be sitting there for hours.

Panetta: I would love to do both, actually. In the back of my head there is another installation piece which is just sound design. You’d be there as long as you could be there. But a more journalistic piece, which tells a contracted story in nine minutes, needs to have a story arc. I wanted to have real people’s voices [provide] a narrative structure and also to use visual effects to tell different parts of the story. So, the projections on the wall tell you what’s going to get you into solitary confinement, or [the visual effects allow you to] experience some of the psychological disturbances.

Filmmaker: Were those shifts in point of view, where the cracks appeared on the wall, for example, based on research or interviews?

Panetta: Yes, the testimony is from the people who are incarcerated, and those are all representations of their stories. So the cracks on the wall that begin to look like faces, Terrell, here, that was his story. They are all taken from real testimony.

Filmmaker: You showed a finished version of the piece here at Tribeca. What has changed since Sundance?

Panetta: Now, food is delivered to you, and it wasn’t before. And there is a nighttime scene. And there is a bit more space in it. It’s really hard to get the pacing and the flow right in VR.

Filmmaker: How do you want this piece to function out in the world in terms of its activist potential?

Panetta: I hope campaigning groups [against solitary confinement] can use this as a tool. But, really, it’s a piece of journalism. It’s a way of raising awareness around this issue. Instead of writing pieces about conditions of solitary confinement, it’s a different way of telling the same story.

Filmmaker: Terrell, I’m interested in your perception of the piece as compared to your own lived experience.

Muhammad: It’s a great educational tool. It gives you a snapshot in nine minutes of what that reality can be. And then to be able to see people experience it! What did you feel? Did you feel suspended in animation? What was the effect of the lighting on you, or the shifting of the position of the chairs? All of these things were done in nine minutes — imagine you have to do that for nine years. Those are the questions we are asking everyone who experienced it. How do you feel after experiencing that? Our experiences will never leave us, but we just want to expose you to a little snapshot of what we had to endure. And then you can tell me, is this humane? Or, should we have a real discussion of whether this is a tool we need to use in our criminal justice system? Because we have new models — we’re in the 21st century. We have scientific proven models from different countries that could work in America, but we don’t use them. We call ourselves a first-rate country, and we go around the world checking everybody else’s human rights statutes, but we’re in violation of the same statutes that we take regimes out of power for. We do that right here! So we want people to see how hypocritical America is and how damaging this tool we use for discipline is. It doesn’t work, it doesn’t have proven results. We have too much data that shows the harming effects are irreversible, and we don’t even know how they play out. Because once you’ve been there you go down the slippery slope to trying to stay sane, going insane, and trying to regain your sanity. And when you get out here, your senses are being assaulted. Now, how are you going to respond?

Filmmaker: How many years were you in solitary confinement?

Muhammad: Seven years. And when I got out, one of the major things that hit me is that I couldn’t walk unaided one city block. No one was stopping me, there was nothing physical preventing me. It was psychological. I would get half way down the block, and I’d stop, and I couldn’t go any further. And I had to get some coping mechanisms to work through it.

Filmmaker: How did you regain your sanity?

Muhammad: How did I regain it? I fought everyday. I developed a regimen. I would get up in the morning and I’d eat, and I’d work out. And then I’d wash up and read. I’d read anything. National Geographic, Reader’s Digest, Forbes, Ebony, Jet — anything I cold get my hands on. As long as I had something to read I could continue to keep my mind in use.