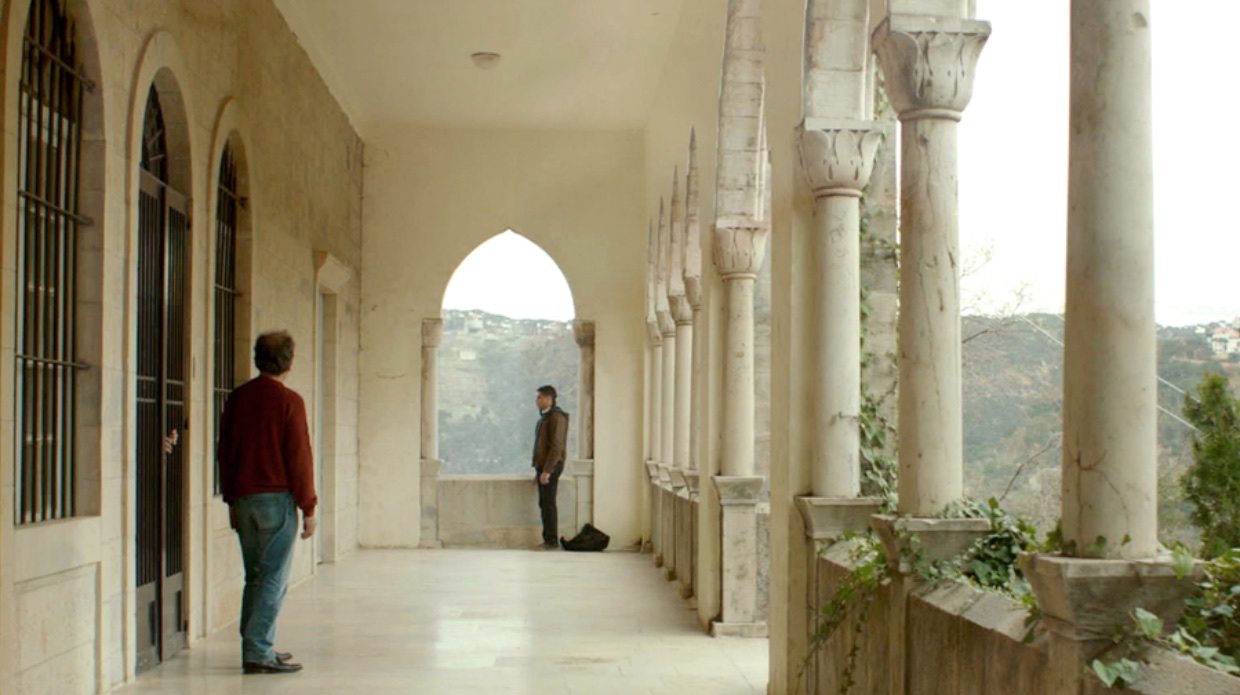 by Scott Macaulay
in Directors, Interviews
on May 16, 2016

Finding political resonance within the intimate story of a blind man, his past, and the Lebanese countryside, Tramontane is the debut feature of filmmaker Vatche Boulghourjian. Based in Beirut, Boulghourjian studied at NYU Film School, and his filmmaking draws upon the community he found in both his home and place of study. Premiering in Critics’ Week at the 2016 Cannes Film Festival, Tramontane also received early development support from the Venice Biennale College Cinema, where I was one of its mentors several years ago. At the time, I was struck by Boulghourjian’s intelligence, empathy and ability to articulate the larger political and cultural themes that infused his elegant story of a blind man traveling across his country to find the record of his birth. So, I was eager to ask him, via email, some questions about the film, which I’m looking forward to seeing here at Cannes.

Filmmaker: First, tell us about the development of the story and, particularly, your decision to tell a story dealing with historical identity using a blind man as your protagonist.

Vatche Boulghourjian: In the course of researching for another screenplay, I read an article in The New York Review of Books called “The Dark, Paradoxical Gift” by Oliver Sacks, where he talks about Prof. John Hull’s book Touching the Rock: An Experience of Blindness. The article itself was written with such empathy, with such grace and depth, that I found myself naturally gravitating towards exploring more. I read Touching the Rock, where John Hull describes his gradual loss of sight until total blindness. In his account, he questions the meaning of sight, its effect on our understanding of everyday life, our relationship with the tangible world, and the meaning of sight on memory. How does sight effect memory? What do blindness or sightedness mean to the formation of memory? His prose was so eloquent, written with such grandeur, sorrow, and wonder, that I could not help but find it transformative. I continued to plough through the writings of Hull and others, and wrote a new screenplay in parallel, a screenplay which would evolve to be Tramontane. For me, the very existential crisis of a man’s personal experience with blindness reflected a nation-wide crisis in Lebanon of relating to history and memory. Defining the self is at the heart of both crises.

Filmmaker: Tell me about your process casting the lead role.

Boulghourjian: My intention from the outset was to cast a blind actor for the lead role. I wanted the experience of blindness to be portrayed by a blind actor and not a sighted actor attempting to capture the complexities of daily existence with blindness.

Following months of searching within communities of blind men and women in Lebanon, I met Barakat. Blind since birth and a musical prodigy, Barakat all but embodied the role of Rabih, and was eager to perform. In the years that followed, composer Cynthia Zaven and I bonded with Barakat. We regularly attended his performances at venues in and around Beirut, we spent days together at his school with his friends, we took long drives together throughout the country, we spent time with his family in their village in the far north of Lebanon. Barakat and Cynthia would choose songs that he would perform live in the film and work on the interpretations. During this period, we recorded screen tests, trying to devise approaches to acting, and we spent many hours of playing music. We learned from each other. Working with him has been one of the most rewarding experiences of our lives.

Filmmaker: Your initial treatment was initially presented several years ago at the Biennale College Cinema, which is devoted to ultra-low budget filmmaking, but it wasn’t one of the selected projects. I imagine it’s changed a lot since then. Can you tell us what scale your film was finally made at? Did it adhere to the College’s tight-budget ethos? And how did the College impact the film generally?

Boulghourjian: Naturally, the project grew in scale and ambition since the time when Caroline Oliveira and I presented it at the Biennale College Cinema. We were determined to make this film, and so were our partners — Georges Schoucair of Abbout Productions and Gabrielle Dumon of Le Bureau. This combined determination had a compound effect on the creative magnitude we strove to achieve, and as a result this influenced the material scale. However, this is not to say that we veered from a low-budget ethos; we still worked within very focused parameters.

Basically, our aim was to maximize everything on screen with whatever was available to us, which was still very limited. So, the schedule was very tight, and we did our best with the equipment that we could secure. And everyone on the crew from the director of photography, James Lee Phelan, to the line production team of Ginger Productions, to the G&E crew understood our circumstances. I am indebted to everyone on the crew for embracing the project with total commitment and for making this film.

Filmmaker: You are a Lebanese filmmaker who studied at NYU and is known in the New York community. And you’re working with a Brooklyn-based producer, Caroline Oliveira, on your film. How did your partial NYC independent film DNA play into the making of Tramontane? And what specific challenges did shooting in Lebanon pose?

Boulghourjian: When I wrote this script, I was ready to turn it into a film with minimal crew and resources — as I had made my short films. In other words, not making it was not an option; I wanted to see this film. That determination is one of the chief attributes of having trained and worked in New York. Caroline came from the same background, as did the director of photography, James Lee Phelan. The knowledge of how and what to compromise in the course of making a film, maintaining focus and not losing sight of our goals and principles, plunging into work with complete selflessness and sparing nothing of ourselves, all are values that were infused into our bloodstream in New York.

Having said this, I am also Lebanese, and my Lebanese background has also profoundly shaped my approach to filmmaking. We were very fortunate to join with Lebanese partners and crew who shared our resolve and committed with equal determination. So the challenges that we faced while shooting in Lebanon are not unusual or unfamiliar to anyone who has shot anywhere else in the world. The nature of the process remains the same regardless of where the film is shot: the only way to overcome challenges during production is to prepare for every contingency imaginable in as much imaginable detail. Many of the locations where we shot Tramontane were remote villages in Lebanon. The instability in some parts of the country raised some difficulties. But, without exception, every person on the crew brought good humor to the set and even the most difficult times were met with convivial collaboration. Our work together was very gratifying because we faced every challenge together and every difficulty seemed secondary because we shared a common goal. Preparedness and faith in the project bonded the team and provided us the stamina to make the film.
.
Filmmaker: Finally, what advice do you have for other filmmakers who similarly face a multi-year road to production? What were the steps you took that enabled your film to escape development hell and make it to the screen?

Boulghourjian: Challenges will always exist; we must accept them as part of the filmmaking process and find ways to transcend them. There is no escape from this.

Each filmmaker will find his or her own path. In my experience, the most important factor was having faith in the project. Without that faith, the conviction that the film is worth making, it is impossible to imagine how one can sustain the drive over the course of years it takes to develop a project. That belief will provide the patience and openness to learn in order to craft a film with care, to fulfill the full potential of a screenplay, to make sure — as much as one can — that the creative and material possibilities are exhausted and that the film is being made with the right partners and collaborators. There will always be room for improvement; there is no escape from this either. But that too is part of the process: the film will evolve and start a life of its own, it will grow and you will mature with it. Use everything you have learned and be open to learning much more. Learn to listen and transform what you hear into work that will improve the project.

Stay strong, enjoy and find fulfillment in bringing an idea, a vision to life.