Directors Frida and Lasse Barkfors on Their Complex Portrait of a Sex Offender Community, Pervert Park 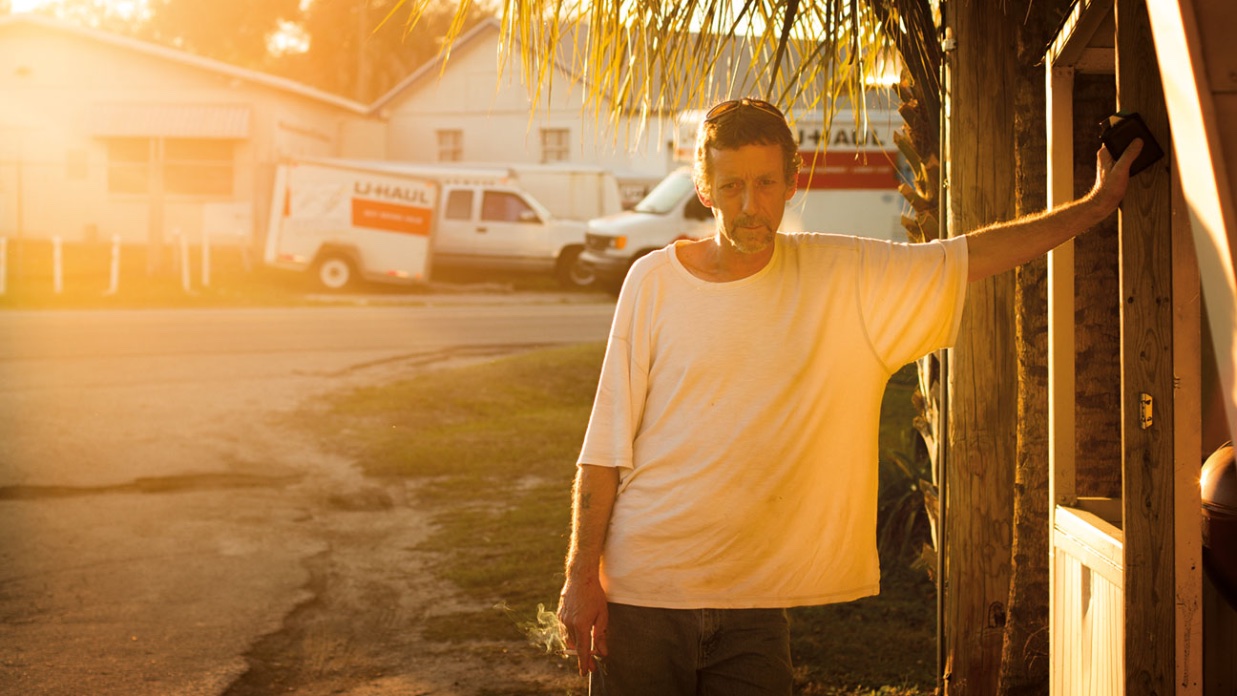 When first-time filmmakers Frida and Lasse Barkfors read an article in a Danish newspaper about a community of sex offenders living in Florida they immediately wanted to go there. Traveling from Scandinavia to Florida they were surprised by the place they found. Without any outside funding, the couple soon embarked on the four-year process of making their first documentary about the Florida Justice Transitions Park — commonly referred to as “Pervert Park,” telegraphing the opinions held by the rest of society.

Pervert Park, which won the World Cinema Documentary Special Jury Award for Impact at the 2015 Sundance Film Festival, opens today at New York’s Made in New York Media Center as part of the Screen Forward series. A 60-minute cut will be shown this July on POV.

I spoke with the filmmaking team about approaching such a difficult subject matter, trust and the cyclical nature of abuse.

Filmmaker: I make films with difficult subject matters, so I am always interested in seeing how people approach that type of work. You have mentioned an article you read that initially interested you. Can you expand on why this topic grabbed you?

Frida Barkfors: It started out with this fascination with the park because it was described in this article as a parallel society, kind of a freak society, where these sex offenders and perverts lived without contact [with the rest of] society. They even had shops and hair salons there because they wouldn’t interact with the outside society. That was intriguing to us. What kind of weird place is that? We had to go there. We didn’t really question what a sex offender was or think so much about the cycles of abuse. So, we went there for a research trip in 2010 just to make sure that we had people who were willing to talk to us. And it didn’t take long before it completely changed [our ideas about the community] — I think we sat and talked with them for a couple of days without a camera and we realized fairly immediately that we had to make a completely different film. The issue is much more complex than it had been described.

Filmmaker: So when you went there you thought you were going to find something different than what you found?

Lasse Barkfors: Very much so. The [original] idea wasn’t actually to think too much about the offenders but more about the society. For me, at least, it was more of an anthropological film about a parallel society, [a film] where we wouldn’t talk to them but they would talk to each other.

Filmmaker: There are some beautiful nighttime shots of the park. How did you decide upon the visual language that would accompany this story?

Lasse: What we wanted from the beginning was to make a film that was [at] eye height with the people we were portraying. Just following them around because the place was so small — that was kind of the only thing to do.

Filmmaker: Was there a consideration about what you shot at night versus what you shot during the day, or was that dictated by action?

Lasse: That was dictated by action. We just followed them.

Frida: But I remember we talked about the night shots with our co-editor late in the process, and we took some out because they had such a different atmosphere — a different vibe. We didn’t want to overdo it. But the whole editing process started with just listening to their stories. That fine tuning of when to be in the park at night and when to be there in the day, and when to have voiceover and when to have their faces, came later on in the process.

Filmmaker: What about your process of deciding how to shoot the characters?

Lasse: We knew that we were going to film them with respect as we would film anyone else.

Frida: Normally when you film sex offenders you would focus on the reddish face, or the dirty nails, or anything dirty that’s in the room. We decided very early on that if we were not going to be doing that with other people, we shouldn’t do that with sex offenders either, because that would be leaning towards sensationalism.

Filmmaker: The stories are different. I felt sympathy for some of the subjects and for others, less so.

Frida: I’m glad you say that. It’s the same for us. I think that’s what we were actually looking for — to give the audience the same experience that we had when we were in the park because we didn’t leave the park with only one emotion. It’s not like we sat there and said, “We feel for them all.” It’s more that you can have a lot of emotions at the same time. I still have a lot of emotions towards all of them. What we worked on the hardest with was: how can we listen to these people without minimizing their crimes? It’s obvious that there is no easy answer.

Filmmaker: Do you keep in touch with them?

Frida: Yes. We stay in contact with all of them.

Filmmaker: And have they seen the film?

Frida: Yes.We’ve been back three times since the film was done and we just recently visited the park two weeks ago. We are doing a short follow-up documentary on Jamie. So we were filming a little bit with him and his mom, and they are all very supportive of the film. All of the characters in the film are very supportive.

Filmmaker: What is it about Jamie that made you want to do a follow up?

Frida: When we made Pervert Park there were so many stories that we couldn’t fit all of them in the film; we had to choose. When we made the film it was about understanding that there are people behind the crimes and if we describe them as [one-dimensional] society isn’t going to heal. That was the most important thing for us, so that’s what we focused on. But that meant, for instance, that stories like Jamie’s — who doesn’t have problems of abuse — got very little space in the film. And we felt there was more to say about the sting [operation] problems.

Filmmaker: It seemed to me that the other overarching theme of the film was the cyclical nature of abuse. Many of the characters were themselves sexually abused as children. But then you do have characters, as you point out about Jamie, who don’t fall into that category.

Frida: Absolutely. And not all victims of abuse become abusers. The majority of victims do not become abusers. But a majority of the abusers are untreated victims. The stereotype of a sex offender is someone who is hiding in the bushes waiting to kidnap a child that they don’t know, and those cases are rare. You know, I’m Swedish, so I’m [a] born feminist, but I still have a problem with the fact that we have a tendency to see men as abusers and women as victims. We hope that our film can help spark a debate about it.

Filmmaker: What differences have you observed between Scandinavia and America in regards to the treatment of sex offenders?

Frida: We don’t have sex registries, but we have the same stigma in Scandinavia, the same difficulty talking about it, and we have the same stereotypical view of a sex offender. So I would say the only thing that is different between America and Scandinavia are the laws. We have a lot of people who want to pass laws similar to the American ones, and it’s just as important to us that Pervert Park came out in Scandinavia because we feel that it’s important that people see this so that they know not to go down that route.

Filmmaker: How long were you filming?

Frida: We couldn’t get any financing. We had tried for three years. Then we just gave up and thought, okay, we have to make another film before we can make this one.

Lasse: Because it’s our first film, and it’s a very difficult film to convince someone to [finance] as a first film.

Frida: Then, we got some small financing — it was crucial. It wasn’t a lot, it didn’t pay any salaries or anything, we still had to empty our pockets, but we got the equipment and came back for whatever we could afford, which was 23 days. We shot for 23 days straight – we couldn’t afford any breaks. That’s what’s in the film.

Filmmaker: It was just the two of you, or did you had more crew?

Frida: Just the two of us.

Filmmaker: Did your small footprint fascinate a more open conversation?

Lasse: I am wondering about that — I don’t know what it is to have a big crew.

Lasse: But yeah, I think so. For us it really works that it is just us two.

Frida: We had been trying to finance the project for three years so when we came back after almost four, they knew that we were very dedicated. We had access to Don, the therapist, and Jim, who was the CEO of the park, and once they kind of greenlit us then they would accept us. It was very difficult in the beginning; they were suspicious.

Filmmaker: Others felt more comfortable being in the film once you won Don over?

Filmmaker: I think people want to be heard and if you are willing to listen to them, they will speak to you.

Frida: Exactly. And this goes for not only sex offenders, but for everyone.

Filmmaker: Yes, that’s what I mean. Do you have hopes for the film other than theatrical and DVD release — for example educational possibilities?

Lasse: We hope to spark a debate. That’s really what we set out for. Hopefully people are ready to listen to this. I think actually if we had made it five years ago when we first started it, it wouldn’t have gotten as much attention. When we started there were 500,000 sex offenders in the United States. Now there are 800,000. All these people have friends and family. So there have to be a lot of people out there who know about this problem. They keep harshening the laws.

Frida: I know they are using the film at the Police Academy in Sweden. I think it would be really cool if they could do something similar in the States.