From NYC to Ukraine and Back: A First-Time Filmmaker Brings Julia Blue to the IFP Narrative Lab 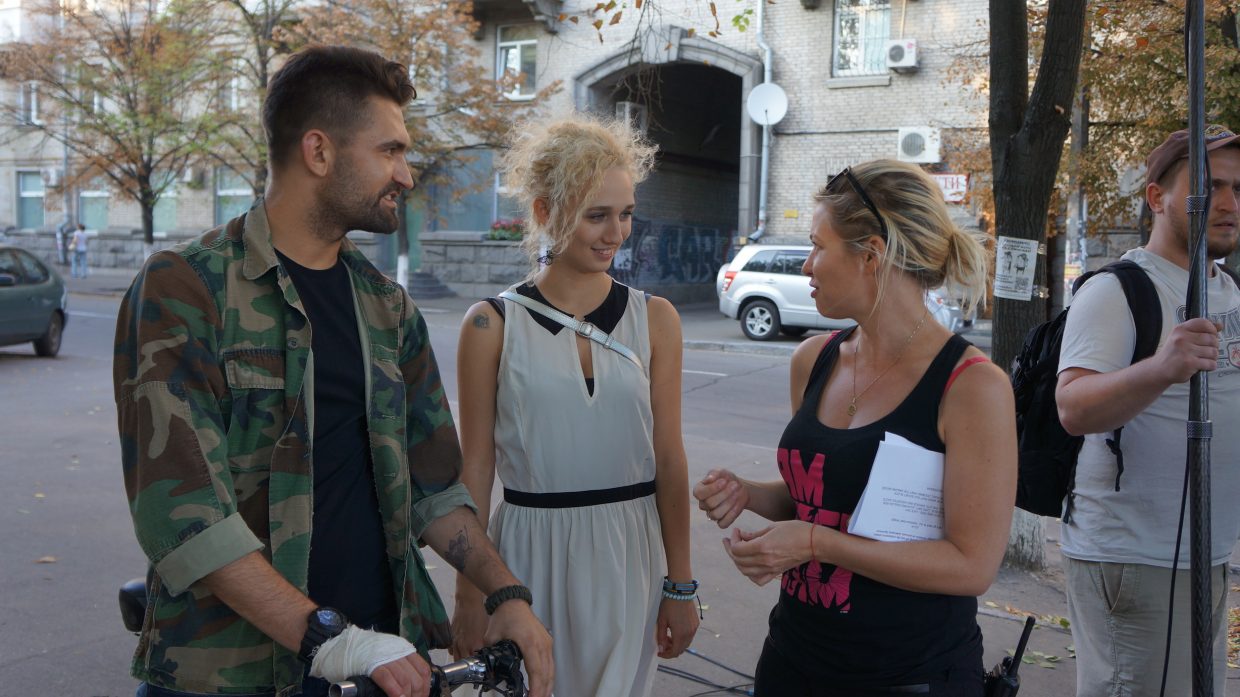 Dima Yaroshenko, Polina Snisarenko, and Roxy Toporowych on the set of Julia Blue

First-time narrative filmmaker Roxy Toporowych, who previously directed the documentary Folk! and who has worked in the art department of films ranging from Safe Men to Captain America, is one of the ten filmmakers taking part this week in the IFP Narrative Lab. Here, the NYU Tisch graduate describes the genesis of her film, which sprung from a Fulbright Award she received to visit Ukraine as the Maidan protests were occurring and just before the revolution of 2014. Return later in the week for parts two and three of her story.

A BADASS TAKE-OVER
The statue of Lenin that stood in central Kyiv was toppled over and getting hacked to bits the night I landed in Ukraine. It was December of 2013, and Independence Square, known as the Maidan, was pulsing with energy. The demonstrations against a corrupt president and governmental regime had been going on for three weeks. It was the twenty-something students, the first to be born in an independent Ukraine, who initially sparked this wave of DIY, civil unrest, which quickly spread to the whole society. Sick of dealing with soviet mentality, corruption and a crumbling economy, Ukrainians had gone badass, and central Kyiv was in full take-over.

My job would keep me there for only two weeks, and in that time I was introduced to local DP Sashcko Roshchyn. It was the beginning of what would be an amazing friendship and collaboration that would see us through the next two years.

The months that followed changed Ukrainians forever. A bloody attack on the protestors, the annexation of Crimea and a Russian invasion all occurred that spring.

A MAJOR AWARD
I landed in Kyiv Boryspil airport in September of 2014 after winning a ten-month Fulbright Award, which I had applied for the year prior. I did not necessarily think I was making the wisest decision moving to Ukraine, a destabilized country actively engaged in a war with good old Putin, but, hell, those were the prize cards I was dealt, so I took it.

JULIA BLUE
Sashcko picked me up at the airport and almost immediately our conversation turned to film. We both loved the film Fish Tank. I introduced him to John Hughes and he would introduce me to obscure Soviet films of his childhood. The Ukrainian film scene was thriving, mostly flooded with incredible documentaries about the revolution (see Oscar-nominated Winter on Fire or any plethora of titles available online) but neither Sasha nor I wanted to make “another Maidan movie”

I had an idea to write a contemporary love story with a female heroine, which in itself felt revolutionary.

The treatment for Julia Blue was written in three months and the first draft six weeks later. I would run major story ideas by Sasha and met with Ukrainian soldiers whose insight added authenticity to the story. Friends, filmmakers and my Ukrainian relatives also provided crucial feedback during this process.

We auditioned almost every Ukrainian actress in her twenties and thirties those summer months to find someone who could encompass the spirit of Julia. Miraculously, Polina Snisarenko came to us a few days before principal photography via her friends who owned a café, The Vagabond, in the hipster portion of town. The Vagabond ended up being my casting office. Dima Yaroshenko came by way of Sasha and his wife, who saw him in a play years before. I forced Dima to audition three times, but I knew the second I met him, that I found my character of English.

By mid-June, I had a second draft of Julia Blue, and by the end of August I had convinced producer Nilou Safinya to come on board with the project. One month later, Nilou flew to Kyiv and with a local film services company in tow, our motley crew of Ukrainian locals and two American women, started production on Julia Blue. It was exactly one year from my initial touchdown at Boryspil airport. 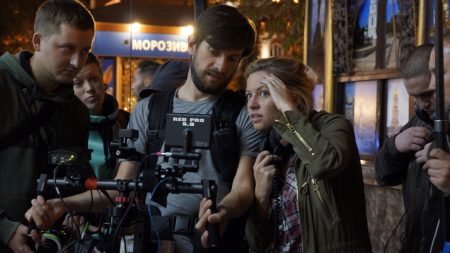 We shot on Red Epic using Cooke Anamorphic Primes for 22 days with a Ukrainian crew of 35, and primarily in Ukrainian language. After ten days of shooting on the streets of Kyiv, our company moved to an idyllic village in the base of the Carpathian Mountains. Dozens of village locals were employed as drivers, crewmembers, extras and actors in the film. As a U.S. director with American sensibilities, this mash-up of culture, content and actual production skills was a challenging experiment.

When Nilou and I landed back in NYC, we didn’t really know what we had in terms of how viable the story and film were — we knew it was shot beautifully, stylistically it felt authentic and our leads and supporting cast just blew it all out of the water, but would the story actually translate?

THE NEED FOR IFP
I’ve known about IFP and the Narrative Lab for years. To apply, you need a partial assembly of at least 40 minutes, so we started to hunt for an editor, I wanted someone who did not speak Ukrainian or Russian, who would see the film with fresh eyes and would help creatively build the story with me. Ben Kim and I worked together at Tribeca Film Festival and over a very spicy lunch in Koreatown, he agreed to look at the footage. A month later, our fundraising promo was ready. One of the challenges was to have every single shot and take translated before we even began editing. We found Ali Kinsella via Columbia University and she began the arduous process of subtitling the entire film before we jumped into post.

THE HOPES FOR THE WEEK
Although directing a foreign film has its idiosyncrasies, I believe that there is one universal truth: if the film is good we all share the glory, if the film sucks then it’s my fault and my cross to bear. I’m not sure what to expect at the Lab. I hope it helps us find finishing funds. I hope it launches successful careers for myself and for the Julia Blue team. There is only one certainty. At the IFP Lab I’ll have nine other allies who have been through the arduous filmmaking process. So until Monday at 9:00 AM when we all of us Lab attendees finally meet, the IFP Lab will remain, as it has been, a mystery.