“Stupidity is the Only Big Risk”: Chevalier Writer/Director Athina Rachel Tsangari on Power, Greece and Filmmaking without Rules 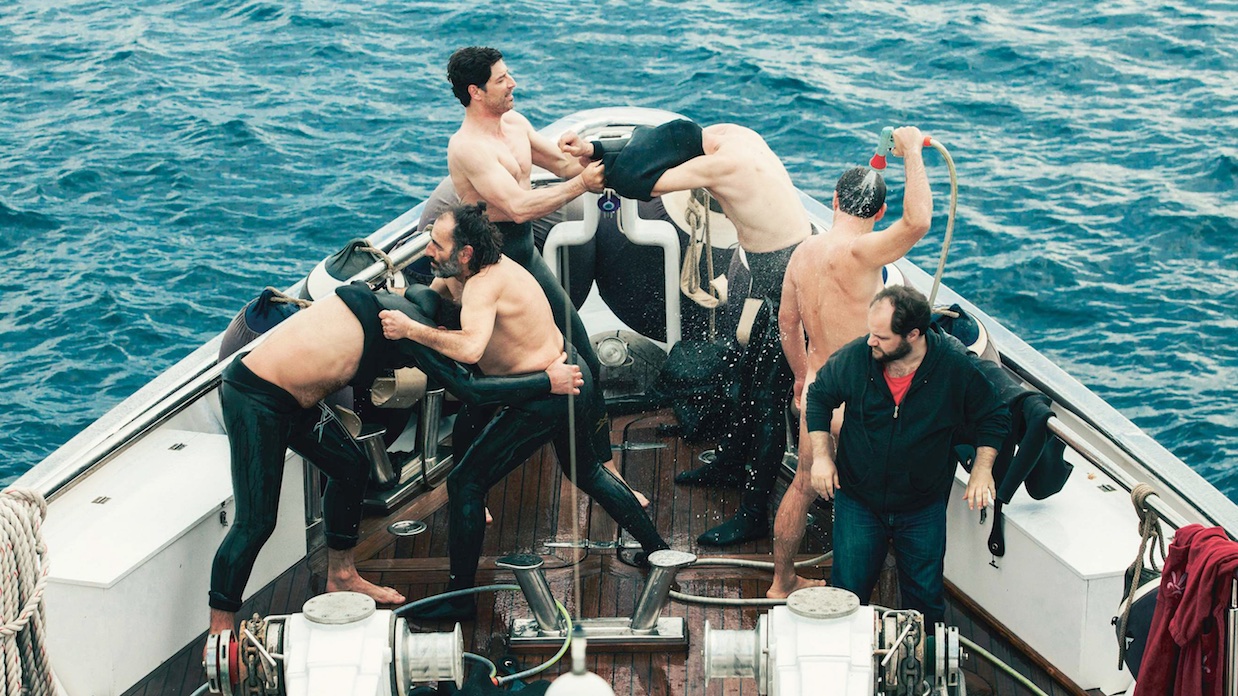 Athina Tsangari is a director and producer whose films examine the negotiation of power. While they span genres and approaches, her pictures — including her latest, Chevalier — are consistently organized around this theme. Chevalier takes place on a boat in the Aegean Sea. The men on board decide to play a game in which they judge each other on… everything. I spoke with Tsangari about her past and future projects and about returning to Greece, which has just wrapped up another tense debt relief negotiation with the IMF and EU. Chevalier opens at the IFC on Friday. Chevalier opens today from Strand.

Tsangari: You know, Chevalier, it’s a small film from a turbulent country that has been so much in the news, and I’m so far away from it — I’m in another part of the world. I haven’t really been there this year, so it’s a very strange moment for me psychologically and psychoanalytically.

Filmmaker: It’s coming out now from a part of the world that all eyes are on. But can you take me back to the beginning? What was the film’s original impetus?

Tsangari: It started as an idea of: how do we negotiate power? You can make a horror movie, you can make an action movie, you can make a bromance. You can make a romantic comedy, and all of these films to a certain extent are films about power. So, it started more like a question mark: how would it be to make a film with an all male cast, after having made The Capsule with an all female cast? And, somehow, in a quite effortless way it started taking place on a boat, and then it was all about negotiating the tone. You know, it’s a movie that was more about exposing the mechanics -– the gears are set into motion when you actually start measuring yourself up against yourself and against the others. Chevalier did not start as a film that I wanted to do about men. It’s mostly my fascination and curiosity about the question of power. To me everything is about power. Every film I am making is about that. I just choose the genre and the tone, but basically this is my number one preoccupation.

Filmmaker: The contest in Chevalier is one without boundaries.

Tsangari: The number one thing that was the most important premise was that there were actually no rules.

Filmmaker: Yes, because if there aren’t any rules then everybody’s going to come to it with their biases.

Tsangari: There is something very inescapable about that.

Filmmaker: The film takes place on a boat, which effectively keeps them all isolated.

Tsangari: Yes, like a fishing trip. I didn’t want to have to be shut in a house for a long time. It was almost like a rite of passage for all of us, that we would just board the boat and then we would sail and we would live at sea. It was winter, and the sea was very turbulent. There was difficulty, there was camaraderie, there was sea sickness, there was fear, there was lots of expressions of the body. It was quite unsettling for all of us, you know, to be in that little boat in the winter and completely isolated from our lives.

Filmmaker: Did you want the actors to improvise?

Tsangari: The script was followed quite exactly during the rehearsals, and then when we started working with each one’s character. And then we started incorporating lines and sometimes entire scenes. In a way, it was a script, but it almost had a video game quality about it. Depending on the chemistry of the characters the story could go this way or that way depending on the buttons that you would push. I’m not sure how to explain this because it was such an organic process and part of the casting was very much figuring out the type of personalities and energies that would make this button pushing fun and productive. That’s why it was so much fun working with Efthymis [Filippou] and deciding, “Okay, so this character can go this way.” The actors worked really hard in terms of staking out their territories as characters. Efthymis and I, from the beginning, we said, “We don’t want a dramatic thing — these guys all have their own existential crisis about themselves, and this is the way that they are playing them out.” I felt quite strongly about not really giving closure. In the beginning the entire cast was lobbying for a big blow out [ending]. I was like, “Okay, we’ll see. Because it’s all up to us.” And then in the end it didn’t happen. It was very much about characters and actors being equal players. I rehearsed a lot in pairs. And I would switch them. At the end of two weeks I realized which pairs were the strongest. Once the pairs were formulated we had our first rehearsal all together. Chevalier was an extremely difficult film to set up. I get asked, “Where was the set?” which is incredible for me, because there is nothing like this in Greece. We organized it in such a way that the crew and the cast were a unit together, because there needs to be some kind of psychosomatic synchronicity.

Filmmaker: You are working on a new script now.

Tsangari: I’m working on two scripts. One is a heist comedy. The other one is a science-fiction film, a Greek tragedy/science-fiction hybrid. Two [projects] that very deliberately are not taking place in Greece. Everything has to do with the part that I am Greek, and I can’t deny this, but I am taking a break right now. The heist comedy is called White Knuckles. I started working on it in my residency at Lincoln Center. It’s going to be my second English-language film. I’m extremely excited about it because it’s completely new territory for me. It’s a full-on genre film.

Filmmaker: Tell me about your experience of your Film Society of Lincoln Center residency.

Tsangari: The great thing about it was and is, for me, the whole high of New York as a place, and also the fact that the Film Society is like a warm, very supportive family. Suddenly you feel very protected and inspired. Then continuing with my fellowship here [at Harvard] I feel fortunate and spoiled. It’s the first year in my life where I didn’t have to work. Since I was 14 this is the first year. And I am 50, so … it tells you a lot.

Filmmaker: When you were 14 and you started working, what was the job you had?

Tsangari: I had left my home, I had run away. I was teaching ancient Greek and Latin. In Greece it’s a big deal to enter university. So you actually start with private lessons outside of school. I loved teaching. It was my way of saying that I wasn’t going to be a doctor. This led to my going to New York, because at that point I was disowned.

Filmmaker: By your parents.

Tsangari: They were not going to help me. They were scared — I understand it. So I got a few grants, and that’s how I did it. I kept working, I love working. I have never made money from directing films or producing films. We have a production company that we started in 2005, and it’s more like a collective, but we actually produce our own films and we’re in charge of our own finances and it was the only way that we could have started making these films. But we have never actually been able to pay ourselves as directors or producers. It’s enough money to keep our independence. So we need to do other jobs, like commercials or teaching or anything to be able to support this capricious calling to make films. So, with White Knuckles, it comes with a budget — it’s going to be a huge new world for me. As always when I enter into a new thing, don’t you wonder how it’s going to be and how much of yourself you are going to have to sacrifice?

Tsangari: The ballet of all of this. I’m already imaging the choreography — not of the camera, but the choreography of actually bringing it to life. It is as fascinating as the shooting itself. I find the producing as exciting as the directing part. The one informs the other. There is this producer/director dual hat that I constantly wear. I’ve been thinking about these early auteurs, like Howard Hawks and John Ford and Preston Sturges — all of these guys basically were hired by the studio, and I doubt they had final cut, and somehow they had films that now we can say they had their signatures. So, I don’t know, there is not just one way. There are different ways of being creative within the parameters and limitations of production. The only thing you cannot negotiate is stupidity.

Filmmaker: And unfortunately, there is an abundance of that in the world.

Tsangari: This is the only big risk: stupidity. Everything else is completely worked out in the end.

Filmmaker: You said you haven’t been back to Greece in the past year. What are your thoughts about Greece at the moment?

Tsangari: Obviously, I have lots of difficulty talking about it, don’t I? I feel betrayed, and I hate feeling like there is nothing I can do. I’ve been extremely political and very engaged as an activist since I was 14. It was always a really big part of my life, so actually now feeling like I have surrendered to this end of logic, end of ideology and end of politics; in a way I feel like I’m in a self-imposed exile. I’m going to be there in a month, for the summer. It’s going to be a difficult return.