“This is What a Movie Feels and Breathes and Looks Like”: Noah Baumbach and Jake Paltrow on De Palma 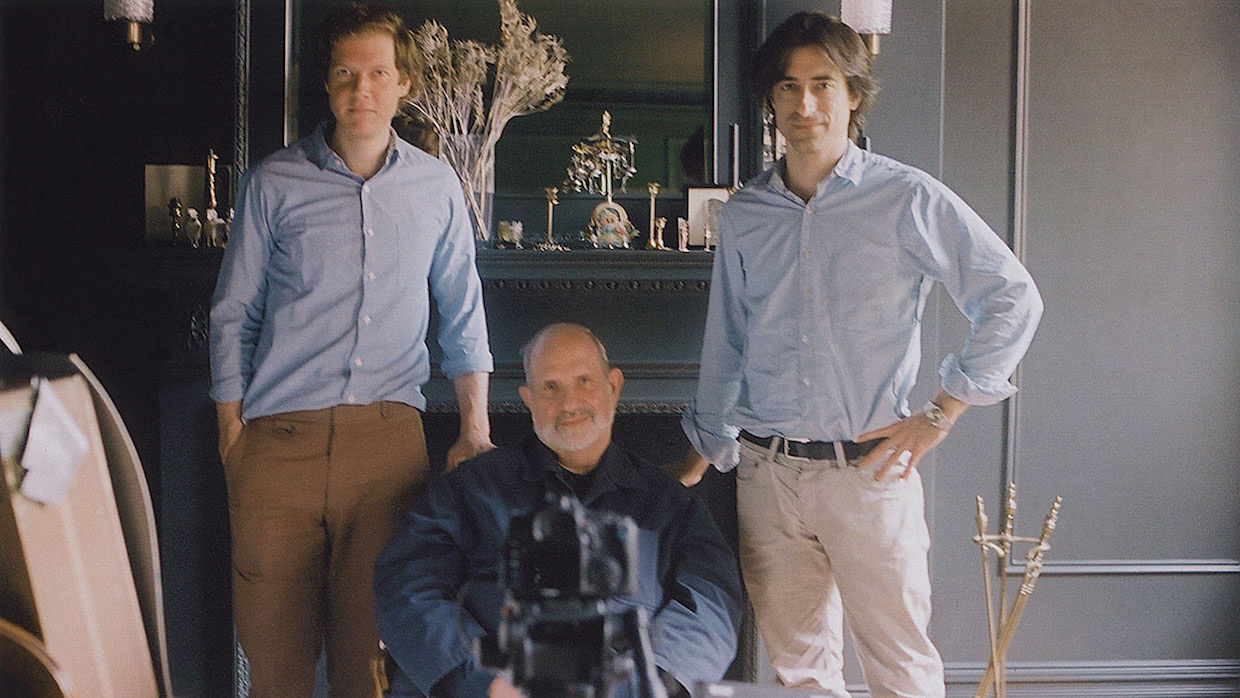 by Evan Louison
in Directors, Interviews
on Jun 7, 2016

It’s always been a convenient avenue for critical dismissal to view Brian De Palma’s films as impersonal. As the director says himself in Noah Baumbach and Jake Paltrow’s eponymous documentary opening this week, he makes films from the outside in — beginning with the visual lexicon of the narrative, then connecting that architecture with living characters and scenes.

Some struggle to defend their affinity for his films. The targets are legion. One is the voyeur’s presence in most of them — almost always misconstrued by detractors and, if only in the most fleeting moments, pegged as either contrivance, obsession, or device. One of the most memorable moments from Carlito’s Way is when Carlito watches Gayle through the window of the dance school, in perhaps the most revealing iteration of this trope, certainly when compared to other, more obscure examples: Keith Gordon in Dressed to Kill, Robert De Niro in Hi, Mom!

In Baumbach and Paltrow’s picture, the director recounts a formative experience. As an adolescent, De Palma embarked on a campaign of following and watching his father, whose behavior had become mysterious due to infidelity. As this recollection suggests, the root of his recurrent voyeuristic theme was in experience. What must have surely been a personal resonance in voyeur characters and the act of watching — ignored by those who would decry his relentless pursuit as suspense trope — reveals itself as an intimate detail of his identity. De Palma is a portrait of an adroit, prescient, lucid man whose legacy precedes him where his persona has remained previously elusive. It depicts De Palma as an auteur more interested in a metacinema that acts as a language meant to entice and comfort the viewer as opposed to giving them pause — who, rather than reality, utilizes the memory of what cinema represents to people’s experiences as narrative material. In a way, this is De Palma’s most personal statement, because it represents his own retreat and the search for his own voice. I spoke to both Baumbach and Paltrow at the Metrograph, whose month-long De Palma retrospective is underway. De Palma opens June 10th.

Filmmaker: How did these films resonate for you when you first experienced them? Did you grow up with these movies? They definitely formed a lot of my own childhood — I associate different ages with different De Palma movies. I would always first see some horrible cropped, excised version, usually on television. Then later on I would see the full, complete version, and yet the memory of the original would remain. Only later would I understand the true gravity of the films’ images and  tones.

Paltrow: Yeah, as you’re saying it that sort of reminds me of how it actually felt for me as well. But I wasn’t allowed to see them. My thing was, I was able to get there through the Hitchcock. I remember with my parents, [I was] saying, “This Body Double is sort of like a Rear Window, so maybe I could…” — that was the first one. They certainly left a very strong impression, the way that they looked and felt. And I was very scarred by Body Double.

Filmmaker: How old were you when you saw it?

Paltrow: Probably 12 or 13, which was the beginning of R-rated movies for me, trying to push them into my life.

Baumbach: Did you see that on VHS?

Paltrow: Yeah, I think so.

Baumbach: Me too. My parents talked about them a lot. I remember they were seriously R-rated, so there was no chance of me getting to see them, and I don’t think I even wanted to see them at that point. It was just comforting for me to hear them talking about it. It’s not like they even talked about it in front of me, but you’d listen to them talking about it or arguing about it. My father had a lot of film stills, he had a study in the basement, and he would put up stills. There were a couple of Brian ones in there — there was one from Dressed to Kill with the wig — so I think I was already interested in them before I saw them. I think I saw Obsession on television with my father, that’s an early one. That one’s sort of more old-fashioned and he was telling me how it was like Vertigo, which I don’t think I’d seen at that point. But Body Double was the first one I saw in the theater, at the Plaza in Park Slope, which is now an American Apparel or something. And I ran into my mother at the theatre — she was there with friends, and I was there with a friend. That was the point where you and your parents are now seeing the same movies.

Filmmaker: How do you feel like it’s informed your own work, if at all? Have these conversations in the film brought that to light? I’m wondering if there is some imprint that the films left on you that may be harder to pinpoint than your obvious touchstones, and if those have more clarity now after the doc.

Paltrow: My opinion is there’s only a few of those, that are really in the fabric of the sense memory of what a movie even is, and I think that Brian is, if not the main one, one of those few directors who you know automatically, this is what a movie feels and breathes and looks like. It’s not about even working in a specific genre, but I think the way he lensed things, the way he transposed whatever it was that was inside of him to the screen, is something that I respond to in a deep, visceral way.

Baumbach: He has a strong visual idea for every scene, and there’s these bravura sequences that are sort of thrilling to watch. I think that’s what any sort of personal filmmaker [does] — you have the scene in your head, in your imagination in some specific and also vague way. Now you have all these tools, so what is the visual equivalent of this feeling that I have? Brian does that clearly and in ways that are exciting. I think all personal filmmakers work this same way, even if the camera’s on sticks with people walking in and out of frame.

Filmmaker: The established understanding of his work misconstrues his intentions far too often. Any critical assessment of his work uses the same tried and true dismissive suggestions, repeatedly branding his output as “style over substance” when in fact, as he says in your film, that’s exactly his objective and the vision of cinema he seeks to honor. You keep mentioning the word personal, and the common notion is that “style over substance” cannot possibly equal “personal.”

Baumbach: The personal can be as autobiographical as Brian talking about following his father a la Dressed to Kill, or the scene in Carrie with the blood which he talks about [juxtaposed] with growing up in an operating room. But there’s also [something] much less articulated, which is how the personal is also embedded in the visual. There’s something about Brian’s camera movement that feels incredibly personal; you can’t necessarily say why, but it feels like Brian automatically. Millions of people use the Steadicam — but when Brian uses it, it feel like Brian.

Filmmaker: In your film, De Palma makes a strong juxtaposition of generations, repeatedly referring to you both as “you guys,” in terms of how your generation’s films may have benefited from the innovations of the ’80s and ’90s that De Palma contributed to, yet derive from the polar opposite end of the spectrum than his — beginning with character, crafting a narrative through an exploration of that character’s qualities.

Paltrow: At the time it seemed accurate as far as a generalization of the differences between us and him, but as I get older, I am thinking in those terms more and having these ideas where I am starting with construction and then filling it in, as Brian says. I probably think more like that now than I did before.

Baumbch: Yeah, probably the same for me. It’s interesting, maybe there is something generational about it. I hadn’t thought of it that way, but more that it’s just a specific approach to doing these things. For me, depending on what I’m working on, in the script stage it might be more character — as Brian says, character that’s helping me find story in order to create the screenplay. But directing is always a visual approach; even if it’s your own material, you’re kind of coming at it from an outside perspective.