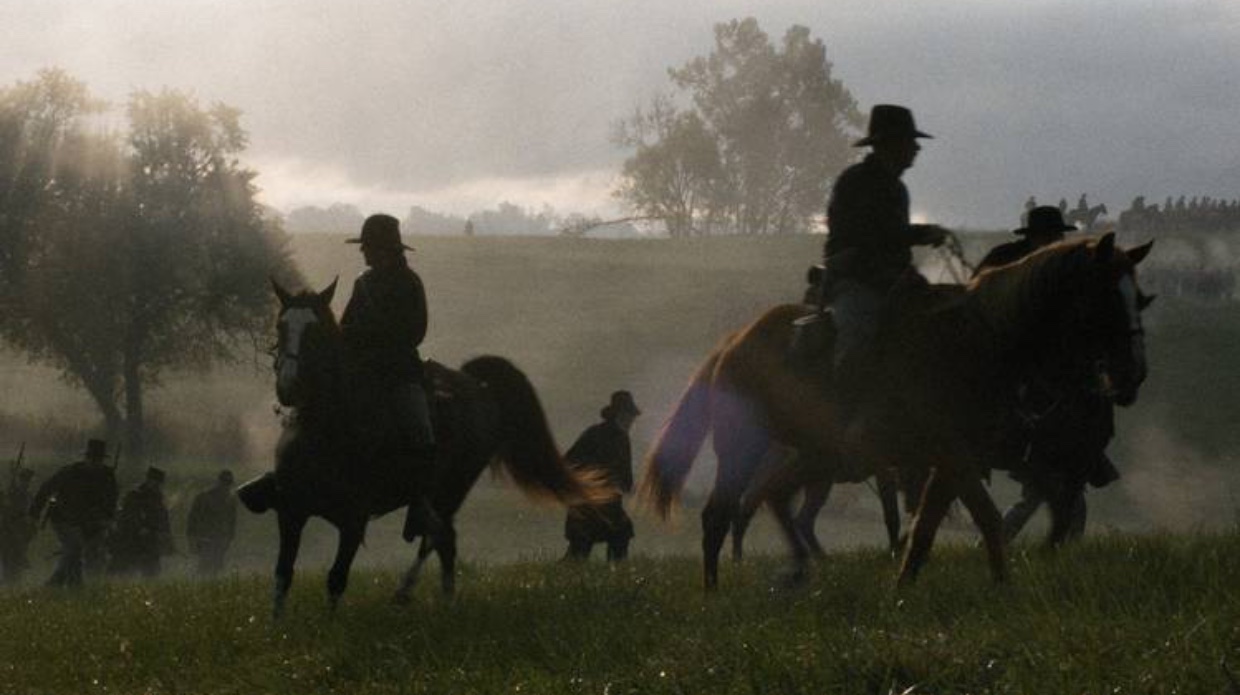 The lives of the young, illiterate Mellon brothers, Henry (Tim Morton) and Francis (David Maloney), whose world barely extends beyond their small, unproductive farm in Small’s Corner, Kentucky, might seem historically insignificant compared to the monumental events transpiring in their own backyard in 1861. The magic — I use the word loosely because the film is cloaked in such an original isomorph of naturalism — of director Zachary Treitz’s Men Go to Battle lies in its equal treatment of the two strands. The filmmaker tailors the aesthetic to his purposes, noting with a hint of sarcasm to The L Magazine, “There is nothing natural about the Arri M40 HMI.” 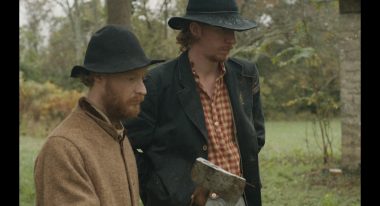 Decisions about the shape of the movie were not made lightly. They are consistent with the sense of scale and the era’s dominant worldview Treitz and co-screenwriter Kate Lyn Sheil uncovered while researching in his native Kentucky unpublished letters and documents from the period, which chronicle what could appear to us as simply commonplace — the weather, for example (one hilarious run-on flirtation scene riffs on it) — or hugely important, like a major Civil War face-off. These topics were to the people of that time of almost identical relevance — the opposite of the way news is presented today on TV or in the print media as an inverted pyramid, a top-down hierarchy aimed at a subjective idea about collective perception of scope. Men Go to Battle is a model of structural democracy.

That the basic plot judges neither characters nor events reinforces the underlying ideology while infusing each and every component of the narrative with an egalitarian charge. All this with no frills, and for all practical purposes, no budget. The couple does have compensatory knowledge of their subject, and in the case of Treitz, a lineage familiar with its patterns and nuances. From this perspective, Treitz and Sheil comfortably share with us the worth they find in the lives of these superficially slight brothers and, over a single year, the personal histories they own.

Their personalities are dissimilar but their paths alike, until a fancy ball they crash changes the expected scenario. The party slices the narrative in half, marking the moment when they begin to shift gears. There is a parallel here: The modestly elegant home where it is held, with fiddlers playing regional tunes for dressed-up women and their spruced-up dance partners, breaks from the even more downplayed architecture of the peasant class we see. Restraint is the order of the day, the better to make it all compatible. For philosophical and economic reasons, furnishings are often suggested rather than depicted.

The brothers are naturally amiable and polite, in the southern manner. Francis is the joker and trickster — he intentionally burns Henry’s hand to manipulate entry into the ball. Unfortunately, he is also a reckless, impetuous manager. Henry is the more introverted of the two, and the more mature. His low-key calm has always kept him in the boisterous Francis’s shadow. But having reached his threshold of patience, as well as a result of an advance he made, after misreading what he thought were encouraging cues toward the ball host’s daughter, Betsy (a fine Rachel Korine), Henry decides to deviate from the brothers’ unspoken shared life plan. Francis stays the course. 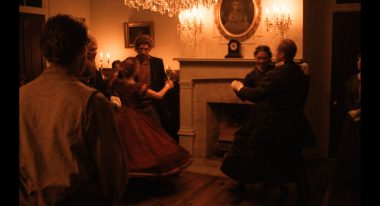 Joining the Union army exposes Henry to conflicts much greater than his own fraternal issues. He maintains contact with Francis through letters, written for him by more learned fellow soldiers. Francis, too, becomes peripherally involved with what was quickly becoming a huge war; unfriendly Union soldiers stationed in the town nearest the family farm mock him, become violent. Once Henry figures he’ll pay his brother a visit, the games begin — and ensure that the film does not run out of steam.

I’m reminded of Primo Levi’s The Truce, in which he recounts his nine-month journey on foot from Auschwitz back home to Turin, Italy. Except that, with most signs destroyed by the end of World War Two, Levi walked the wrong way. Adventures, however, took place no matter which direction he would have taken. Having had almost no experience of being alone, he instinctively opened up to all kinds of situations, both those thought of as life as usual and those considered strange by any standard. His flaunting in print his visit to a wildly colorful whorehouse typifies one of Levi’s strategies of representation.

Even though it takes place in the early days of the Civil War, Men Go to Battle, however, sets its sights on intimacy; DP Brett Jutkiewicz and production designer Jacob Heustis are both essential players in bringing the sensibility to life, and Morton and Maloney perfection in enacting the brothers put so closely under the microscope. The sequence in which Henry stays overnight at the home of a woman whose husband is off at war is shot not as something sensational but, with ellipses and merely furtive glances, as a personal encounter that honors the couple’s privacy. Treitz contrasts the broad strokes, the more epic norm of the era, with more intimate ones. A poignant chance meeting in which Henry and a Confederate soldier slowly and carefully exchange coffee and tobacco across a rivulet smacks of sincerity, of a quasi-close connection even between members of enemy camps. The scene in which Henry, in full uniform, poses for a static daguerrotype, is not spectacular in the least (although the few, discreetly underpopulated battle scenes are). Close-ups function best; establishing shots, which widen the canvas to a large degree, are a no-no.

Once again, Treitz levels the playing field, giving equal weight and importance to everything Henry comes across–as if the filmmaker has put himself in the position of an innocent thrust for the first time into terra incognita, a virgin freely submitting to sensations he’s never known firsthand. For his part, Francis may be sedentary, never having left the farm, but, after enduring a tough bout of loneliness, he starts to transform himself. To be precise, actions outside him force his hand to behave in a more grown-up fashion. He does retain into adulthood his knack for hustling up survival money. Now his living arrangements are such that he can not act reflexively, without thinking things through. Gone are the irresponsible days of leaving the chicken coop wide open and wasting fowl by refusing to heed advice (Henry’s, of course) on proper barbecuing.

The relationship between the siblings, so close it borders on homoeroticism, or maybe pathology, becomes different once each has a year without the other. Will Francis still push easygoing Henry around? Will the latter emerge from his brother’s domination? Is the ex-soldier still beloved, or does he become thought of as an intruder? Nothing ends up as it might in Hollywood’s inconsistent hands. But then, little in this seductive jewel would ever come out of the studios.