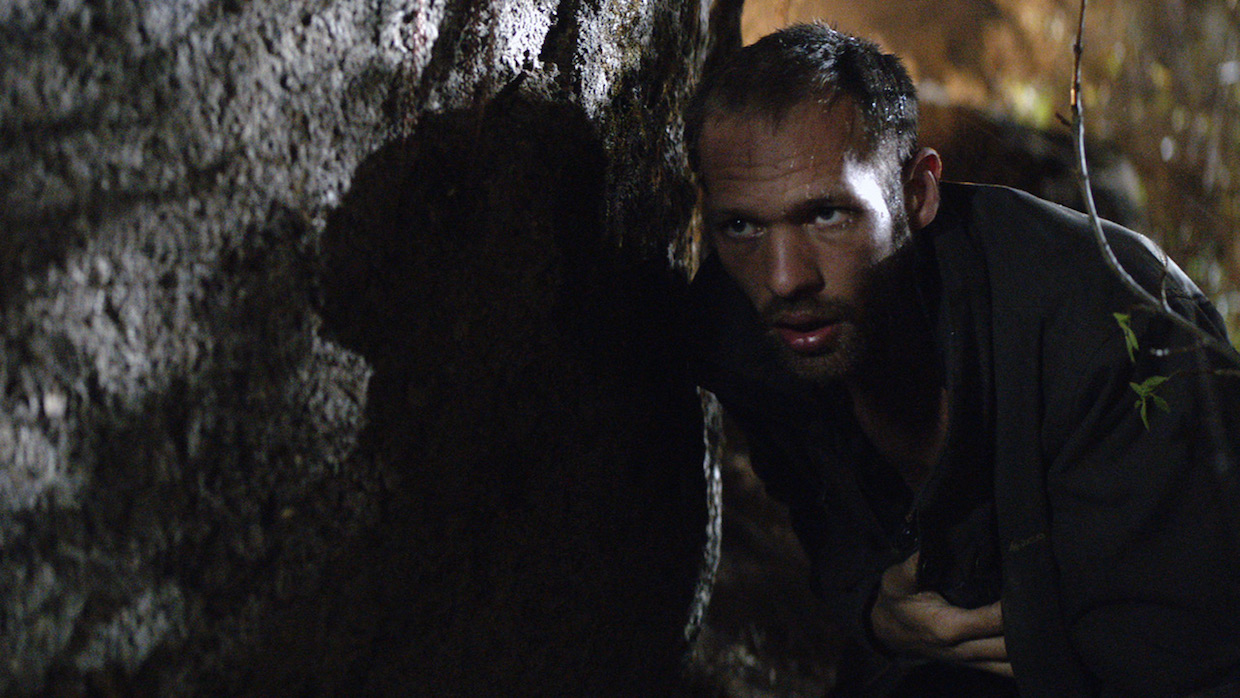 by Giovanni Marchini Camia
in Festivals & Events
on Aug 8, 2016

In the last two years, the main slate of the Locarno Film Festival had been nigh miraculously star-studded (in strictly arthouse terms), boasting premieres by the likes of Chantal Akerman, Pedro Costa, Lav Diaz and Andrzej Żuławski, to name but four of the most prominent. Perhaps inevitably, normality had to be reinstated eventually and this year presented less immediately mouth-watering offerings. Indeed, the best films in this first half of the festival were to be found outside of the international competition.

Thus far, the most anticipated title has also been the most disappointing: Portuguese auteur João Pedro Rodrigues’ The Ornithologist, a contemporary and wilfully profane retelling of St. Anthony of Padua’s entry into the Franciscan order. (This won’t be at all apparent to anyone unfamiliar with the saint’s biography, so a bit of preparatory reading may be advisable depending on one’s Catholic conversance.) The protagonist Fernando is an ornithologist who gets lost in the woods and has a series of variously outlandish encounters, including with a deaf-mute goatherd called Jesus, a creatively sadistic duo of Chinese peregrinators, a group of carousing caretos (traditional carnival characters from the northern Portuguese region of Trás-o-Montes), and a natural history museum’s-worth of taxidermied animals.

With its mystical forest setting, often shot at night, and episodic structure of fantastic escapades, many of which are of a homosexual character, the film recalls both Apichatpong Weerasethakul’s Tropical Malady and Alain Guiraudie’s picaresque adventures, though it doesn’t always benefit from the comparison. Neither as effortlessly lyrical as the former, nor as surefootedly funny as the latter, Rodrigues and co-writer João Rui Guerra da Mata’s hit-and-miss inventions too often come off as mere provocation, as when Fernando gets pissed on by a carero or when he walks in on Jesus suckling on a goat’s teat with raptured intensity. More critically, while Apichatpong and Guiraudie’s flights into the surreal have a clear purpose, namely attempting to navigate and give expression to the fathomless complexities of desire, what Rodrigues is aiming for is much more difficult to discern.

As curiosity gives way to bewilderment and eventually frustration, the experience of watching The Ornithologist is reduced to a game of trying to decipher the parallels between the film and St. Anthony’s life: the hero is called Fernando, which was also the saint’s birth name; St. Anthony was a Franciscan monk, an ornithologist studies birds, and birds are the symbol most commonly associated with St. Francis of Assisi; legend has it St. Anthony somehow got to hold baby Jesus and the goatherd is a cherubic deaf mute whom Fernando sodomizes, which is arguably kind of similar; and so on. Such gleeful blaspheming can be a lot of fun (cf. Pasolini, Buñuel, Monty Python et al.), but The Ornithologist ultimately feels like an overlong succession of increasingly labored contrivances.

Also competing for the Golden Leopard and situated at the opposite end of the cinematic spectrum is Tizza Covi and Rainer Frimmel’s Mister Universo, a social realist docufiction-cum-road movie. Again working with the same group of circus performers from their previous three features, the Italian/Austrian filmmaking duo’s latest follows the lion tamer Tairo, who played the friendly neighbor in the exquisite La Pivellina, in his attempt to locate the strongman and one-time Mr. Universe Arthur Robin. As a child, Tairo had been taken to see Robin bend a thick iron bar with his bare hands and had kept the horseshoe-shaped iron as a lucky charm. When his amulet gets stolen and his luck simultaneously goes down the drain – three of his five big cats are put out of action by sickness and old age – Tairo drives across Italy to find Robin, hoping he will bend him a new horseshoe and restore his fortunes.

Mister Universo is once again buoyed by Covi and Frimmel’s tender eye. Through Tairo’s visits to various members of his large circus family, both formal and informal, the film paints a moving portrait of a close-knit if geographically scattered community weathering economic adversity through mutual affection and support. At length, however, Tairo’s many stops along the way, each swiftly executed and consisting primarily of subtext-laden small talk, fail to add up to an appreciable narrative. It slowly becomes evident that the filmmakers came up with the film’s structure and intended message first, then tried to fill in the blanks afterwards. Tairo’s journey and the circus’ flagging success are rendered representative of a beleaguered, depressed Italy, wistfully reminiscing about former glories and putting all hope in chimerical and, importantly, external sources of salvation. Not only is the import of the film’s transparent symbolism rather pat, but its formulation also teeters awful close to the exploitative. This is certainly inadvertent, as Covi and Frimmel’s empathy towards their subjects is beyond question. Nonetheless, using a real subculture and its milieu – the muted 16mm photography and perennially overcast skies combining to accentuate the dreariness of the characters’ (and actors’) living conditions, all waterlogged trailer parks and cramped apartments – to symbolize a moribund society isn’t the most tactful of allegorical strategies.

Jia Zhangke’s The Hedonists, screening in a sidebar, offers an illustrative counterpoint. Set in Jia’s hometown of Fenyang, the 26-minute short tragicomically depicts three mine workers’ hapless attempts at finding new jobs after the local coal mine is shut down, coal now being cheaper to import than source domestically. While maintaining an incisive edge, the theme of the common Chinese being left behind as the country rushes headlong in the global capitalist race is the same one Jia has been exploring for two decades now. The Hedonists can thus be considered a minor work since it doesn’t offer much of an update. That said, it’s also his most accessible and easily enjoyable – it’s certainly his funniest. More than anything, the film seems like an excuse for Jia and his regular crew to have fun trying out new things: DP Yu Likwai gets to extensively play around with drones to innovative and often extraordinary effect (one shot that starts off at street level and then soars higher and higher, framing all of Fenyang through a gradually thickening curtain of smog, is particularly spectacular); Zhao Tao, who doesn’t appear in front of the camera, shares co-screenwriting with Jia for the first time, which might account for the script’s more hilarious dimension; and Jia’s cousin Han Sanming, the stoic hero of Still Life, proves himself an amazing comic presence, his rotund face and rascally grin eliciting the film’s biggest laughs.

Every year, the festival’s exceptionally curated retrospective offers the safest bet for catching good films, almost always screened in celluloid. Props are due to the programmers for their daring and conviction in picking a thoroughly unsexy focus this time around: little-known German films from 1949 to 1963, i.e. the period of Konrad Adenauer’s chancellorship. The argument put forward by curators Olaf Möller and Roberto Turigliatto is that this period of German cinema, which is largely dismissed as offering little beyond Trümmerfilme (disconsolate, self-pitying rubble films) and Heimatfilme (pastoral films, mostly set in the countryside) – genres that reflected the Adenauer government’s agenda of avoiding confrontation with the horrors of Nazism in favor of rebuilding and moving on – in fact offered a wealth of artistically accomplished, politically daring works that have been unfairly overlooked.

One stand-out entry that definitely corroborates the curators’ claim is Franz Cap’s All Clues Lead to Berlin from 1952. With its story of former Nazis (although, significantly, the word “Nazi” is never uttered) conducting a counterfeiting operation from their underground hideout below the rubble of the city, the film expresses the same discourse that would later become the 68ers battle cry – that the majority of the war’s criminals were still hiding in plain sight without having faced consequences for their actions – and led the way for the concerted and collective process of Vergangenheitsbewältigung (literally, “coming to terms with the past”) of the ensuing decades.

Politics aside, the film is also a dynamic crime thriller peppered with mischievous humor and bookended by two phenomenal chase scenes. In the first, the counterfeiters flee from a fleet of police VW Beetles (a hilarious sight), passing several of West Berlin’s most famous landmarks, including the Kaiser Wilhelm Memorial Church, the Victory Column and the Brandenburg Gate, all breathtaking sights to behold jutting out of the razed cityscape. The second is even more extraordinary, a 15-minute foot chase through the ruins of the Reichstag, its once-palatial interiors completely demolished and the walls and columns covered in graffiti from the Soviet army. The film’s last minutes show the characters running across the Reichstag’s roof backgrounded by the gigantic, wrecked shell of the edifice’s famous dome, which today is one of the city’s most popular tourist destinations. Though almost forgotten, as a time capsule, Cap’s portrait of a still-demolished Berlin manages to trump even that of Rossellini’s infinitely more famous Germany Year Zero.